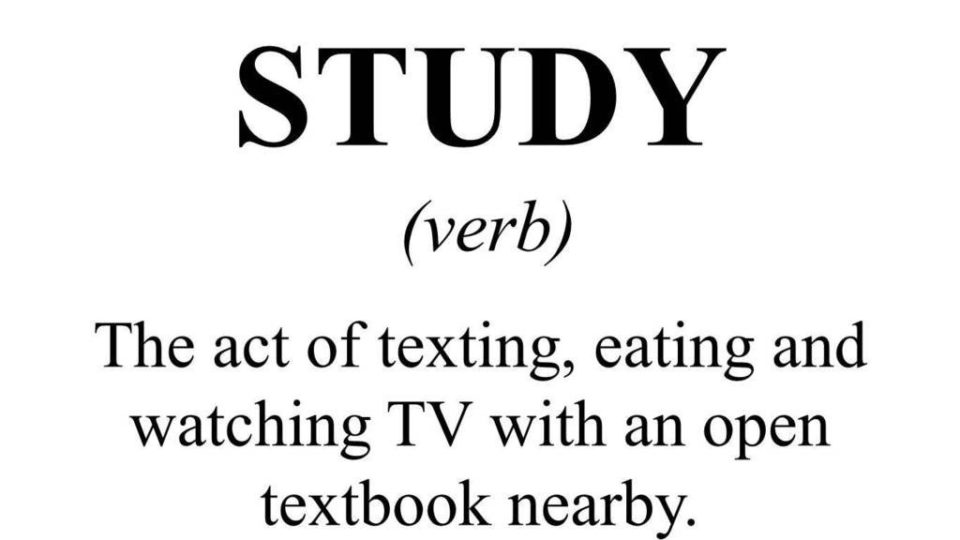 Take a breath. The nightmare is over.

As the end of the semester comes to a close and the majority of us are returning home for the holidays with the hope of receiving love and affection from our loved ones, after the hellish week that we’ve all endured, I want to take a minute to commemorate some of the nightmares we’ve all experienced or simply heard of. I will admit, that during final exam week here at our beloved University of Iowa, we all have our own horror stories; however, there will

always be those select few individuals whose horror stories will top our own and make them look like a walk in the park.

After reaching out to the student body, I have gathered a wonderful collection of final exam horror stories that I am more than happy to share and laugh at while ignoring my own past week transgressions.

“I had a seven thirty final so I stayed the night with a friend that lived on campus because I was afraid that I wouldn’t either make it my exam on time in the morning because of the snow, or that I simply wouldn’t wake up and oversleep like I always do. Well, it’s safe to say that I did wake up for my exam in the morning and made it on time; five points for Gryffindor; however, before I left for my exam, I realized I didn’t have any pencils with me so I bummed two off my friend. I put them in my back pocket and left by sending thousands of prayers up to God to let me score above the curve because let’s face it, stripping is not a career choice for me.

Anyway, my friend’s apartment was about a two-minute walk from my exam location so I got there rather quickly as you can image. Strategically picking my seat in the auditorium, I sat down and went to grab the pencils out of my back pocket so they wouldn’t ruin my jeans but they were gone. In the two-minute walk that it took me to get there, I lost both of my pencils, hope of passing my class, and my soul. I didn’t know what to do so I sat there like a sad lost puppy desperately looking around the auditorium for someone I knew to ask for a pencil.

God must have heard my prayers because a girl in my discussion sat behind me so I asked her. The funny thing is that she gave me that look like, “Really, you show up to an exam without a pencil.” I quickly explained myself to her and she laughed and gave me a pencil. Yes, “gave” because she wasn’t getting it back.

I used that same pencil on the rest of my exams.”

“I am a horrible test taker so I naturally work myself up but this year, I did the absolutely fucking most. I had a written final exam and I was running late so I left my apartment with only my ID, hopes, and aspirations. I ran halfway across campus in nothing but my pajamas and a thin jacket ducking and weaving the depression in the atmosphere to make it to my exam in one piece. Sliding into the classroom with five minutes to spare, like the suave person I am, I take a seat in the back as the professor begins to pass out the exam. When he gets to me, he hands me the exam and that’s when I realize I don’t have a pencil. I immediately begin sweating and shaking so I make my way to the front of the room to ask him for a pencil but out of nowhere, I swear to God nowhere, I passed out and the next thing I knew I was waking up in an ambulance on my way to the hospital.

Turns out I had an anxiety attack but the professor still sent my exam with me.”

“I hate Iowa in the winter because not only is it cold but icy, too.

I had a seven thirty final Monday morning. When I left my dorm it was cold and ice was everywhere, but I had my coat and boots on so everything was all good. My exam was in the EPB oddly enough so I decided to walk down the hill directly behind the old capitol building, but that was the worst decision I have ever made in my life, like seriously, what was I thinking. Walking down the first set of stairs then the second awkwardly short second set, I stepped down and hit a patch of ice and slipped. Without thinking, I reached out and grabbed some poor girl and pulled her down with me. Screaming, we both fell halfway down the hill on that patch of ice holding onto each other for dear life

When we came to slow stop, we both made eye contact and laughed. Helping her stand, I apologized profusely and she told me it was okay and to not worry about it. When we went to part ways, we both ended up heading to the same exam so we walked together and chit chatted about how screwed we both were with this exam.

Let’s just say my grades went downhill as I did.”

Was the exam canceled?

Was the exam location moved?

Did I simply lose my mind?

Was the exam take home?

That’s right, you guessed it, the exam location was moved.

Waking up on the wonderful Tuesday morning it was, I went to the library to crack open my course textbooks, blowing off the dust and cobwebs here and there, to get in a last few hours of studying. As the sun set and exam was slowly approaching, I gathered my books and chugged my tenth cup of coffee and headed out.

I walked up the hill to MacBride to get a good seat. When I got there, there was already quite a good amount of people there so I stole an open seat on the outside of the rows because I’m a fast test taker. My first clue that the exam location was moved when people started taking out calculators. Ignoring that hint for God knows why, I went back to my textbook and started reviewing some definitions and concepts I wasn’t one-hundred percent sure of. That’s when a girl, who was sitting next to me, started talking about derivatives and how she sucks at math.

When I say a light bulb went off in my head, I swear my eyes were glowing yellow. I turned to her and asked what exam she was here for and she said calculus. Embarrassing enough, I gathered all of my shit and stood to run out of the room when some guy was holding out a scantron to me. Looking around, everyone was staring at me like I lost my mind so I just ran out of the room. I quickly opened up my email and saw that my exam location was changed and I had like two minutes to get there.

It’s safe to say that the Flash ain’t got shit on me.”

“Halfway through one of my science exams, a blood-curdling scream rang throughout the auditorium, making everyone drop their pencils and look up in a panic. Both the TAs and professor ran to him in alarm, asking him what was wrong and if he was okay. The guy was obviously panicking and point at the desk in front of him. Craning my neck, I saw that there was a group of vicious black spiders crawling on his desk and over his exam.”

Well, if this doesn’t sound like a final exam week straight out of hell, then I don’t know what is.

As a quick wrap-up for part one of this collection and semester, I want to thank all of the individuals who submitted their horror stories to me and I hope that next semester’s final exam week is a little bit kinder to you all than this one has been.

I’ll see you all very soon in part two.