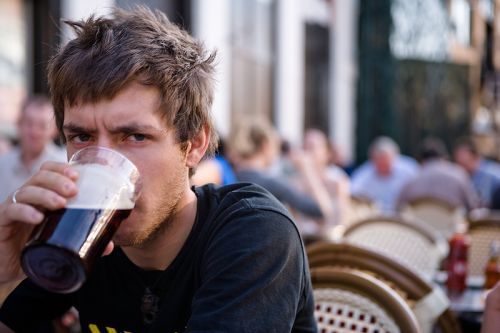 Guess who’s back and better than ever.

I am but for others, not so very much. Just when I thought final exam week couldn’t get any worse, reality once again one-upped me and

proved me wrong. However, I couldn’t help but resist to share more testimonials of horror stories, during final exam week, that I have been receiving and ultimately decided to keep the collection going.

As a quick suggestion, if you think your week is going bad, just take a moment to read these accounts and I’ll bet your change your mind rather quickly. I know I did.

“I’m a pretty sensitive guy and I’m not afraid to show my emotions.

During my last final of the semester, I was sitting next to a girl who was freaking out before and during the exam. She kept asking me if I studied and if I was prepared for the exam while going on about how she is prepared because she studied for it all weekend and had an amazing flashcard set to prove it. I personally, was pretty concerned with this exam because it was one of those that can either make or break your grade and man did I not want it to break my grade. I will admit that I didn’t study for it as

much as I should have but enough to get by and hopefully score above the curve. Halfway through the exam, the girl started to mumble to herself and suddenly started crying out of nowhere. I didn’t know what to do because the TAs were looking directly at us like we were insane so I leaned over and whispered to her that everything was going to be okay and that this exam isn’t the end of her life. She turned to me and whispered back how this exam is sixty percent of our final grade and it’s not curved.

Fuck, she was right.

Looking down at my test, I started to cry too because my last five answers were C and if that isn’t a sign of failure, then I don’t know what is.”

“I had a complete mental block and forgot how to spell the word “of” sadly enough on one of my exams. Halfway through my extended response answer, I stopped and stared at the odd word and kept saying it over and over in my head debating whether or not I spelled it right. When that wasn’t working, I moved on to whispering it silently to

myself, low enough so the weird TA wouldn’t hear me because he was already watching me like a hawk. In short, I spent majority of my exam rewriting my response so any sentence wouldn’t require the use of the word “of.”

When I left my exam, I asked my roommate how to spell “of” and he looked at me like I lost my damn mind.”

“Nothing is worse than pulling an all-nighter in the library to finish a paper you were working on all semester and discovering that the university wiped your desktop, erasing your entire paper, and leaving no trace of it behind.”

“I can honestly say that I am the loudest sneezer you will ever meet in your life.

During one of my exams, I got that familiar urge in my nose to sneeze but I held it back because I have a very loud and obnoxious sneeze and I didn’t want to disturb anyone taking the exam. Wiggling my nose and rubbing it with my palm, I did virtually everything to hold it back until the girl in front of me flipped her hair and I got a nose full of her flowery perfume. Unable to hold it back, I closed my eyes and prepared for the worst. I sneezed so loud the TA dropped a stack of exams, the professor stopped everything she was doing, and the girl in front of my shrieked out of fear.

Let’s just say for the rest of the exam I kept my eyes on my own exam and refused to meet the TA’s eyes when I handed her my exam.”

over. Being the wonderful student I am, I decided to take a foreign language this year for the hell of it because one: I thought it would be exciting to speak another language besides English. And two, because I needed the gen-ed requirement; you know, being a 3rd year student and all, I’m kind of running out of time. Anyway, that’s besides the point but overall this semester was fairly kind to me; however, my professor, on the other hand, was something else.

As the semester was coming to a close, it was only natural for me to begin stressing over the final exam because it included an oral exam segment, which if I do say so myself, is more difficult than being able to read and write a language. This oral was different from the last because instead of it being individual, it involved a partner. Big shocker there. My partner was cool and we had a mutual understanding that we both wanted to do fairly good on this exam so we teamed up and choose a time to meet our professor to do the oral part of the exam.

This is where it all began.

At first, we were supposed to meet our professor, the Friday before final exam week officially began, at her office around five. My loyal partner and I showed up at five on the dot, but can you guess what happened?

I know what you’re thinking: The professor never showed up? That’s preposterous.

Well, let me do the honor and inform you that the professor indeed never showed up. My partner and I just figured that the professor was running a little late but after about thirty minutes of waiting I was ready to go home and go to sleep. Not wanting to wait around the empty deserted hallway in Phillips Hall, my partner and I shook hands and decided to leave together and just email the professor with our heads held high. Later that evening, I received an email from the professor apologizing for missing our exam and asking to rescheduled. I don’t know why the professor asked if we can reschedule. I mean, we kind of have to do the exam one way or another, it’s like ten percent of our grade.

Anyway, we rescheduled for a later time in the week, final exam week to be exact, and agreed to meet then. Now, as my partner and I walk to the professor office ready to get this over with, can you guess what happened?

I’m serious. No joke. This is not a drill.

Not knowing what to do, my partner and I both stood outside the professors like lonely lost

puppies debating life and wondering what our purpose in the world. After say an hour, I said fuck this shit and left. I emailed the professor and was like seriously, what is going on. As Friday approached and students were returning home for the holiday, I still hadn’t heard from my professor so being the adult I am, I packed my shit and went home.

But the story doesn’t end here

As I’m sitting at home watching basic TV because my family is too poor to afford real cable, I get an email from my professor apologizing about missing my oral exam again and asking if we can do it over the phone.

Can you guess what I did?

I picked up my phone and dialed my partner’s number then the professor’s.

I haven’t been on three-way since I was in high school.”

To conclude this collection for this semester, I want to thank all of the individuals who submitted their horror stories to me and I hope that maybe life will just be a little bit more merciful when it comes to you.

You guys definitely deserve it.