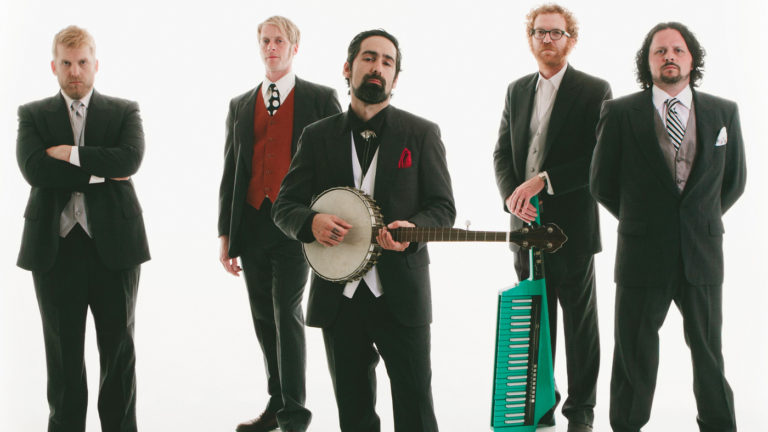 Blitzen Trapper made their way to Iowa City for a unique “stripped down” show with many covers and song-writing stories this past Tuesday night, September 20th. I was happily surprised with the size and variety of the crowd at The Mill, though almost everyone was in their mid-thirties or older. The Portland, Oregon based band brought along Canadian openers Kacy & Clayton, who started their set right at 8pm.

The namesake of the band, Kacy and Clayton, first took the stage with only a guitar and some microphones. The first few acoustic songs reminded me of a slightly-less folky version of the now-extinct Civil Wars. Kacy’s riff-filled melodies were paired beautifully with Clayton’s harmony and rhythm guitar.

Their style was very relaxed and informal, which was good for the music, though less good for their interactions with the audience between songs. Clayton asked the audience for a sewing kit for his new shirt, which already had a couple buttons pop off–unfortunately for the shirt, the audience was complete crickets.

Luckily, the band was unfazed by the lack of energy, and pulled two more band members up to the stage. The drummer and bassist were middle-aged, cool guys with beards and berets. I don’t remember the bassist’s name, but thanks to Clayton’s introduction I do remember that he hasn’t had a single cavity in his life. This goofy fact helped the audience engage slightly more, and the full band put on a lively set.

I’m not an avid fan of country, but I could definitely respect both bands’ talent. Plus, there’s just something about live music that’s always enjoyable.

Next, a man with a guitar and a harmonica took the stage–lead man of Blitzen Trapper, Eric Earley. He informed the crowd that this show would have a lot of story-telling, which he said “scares the **** out of [him] ‘cuz [he] doesn’t like talking.” I’m glad the show was more intimate, because it allowed me to really engage with each song.

I especially liked the songs “Furr” and “Across the River.” Almost all of the audience members sang along to Furr, which happens to be one of the band’s oldest and most successful songs. I really connected to the story for Across the River. Earley told a story from his high school days, when his friend Kyle’s dog jumped in a river. Despite the current, the boys jumped in after the pup. Soon enough, Kyle and his dog were back on shore while Earley was swiftly moving downstream. Thankfully, he didn’t die and wrote a sweet, nostalgic song instead.

Halfway through the set, the show had an abrupt stop by request of The Mill. A man fell off a bar stool and lost consciousness, so an ambulance had to be called. The band took the time as a smoke break and didn’t let it affect the energy of the show in any way.

After the band was back in their place, the rest of the show was a really diverse mix of Blitzen Trapper songs and covers. Each song seemed to be extremely nostalgic to the band and a majority of the audience. It was cool to witness people getting so into the music, but as a 20-year old I didn’t quite connect to the show in the same way.

I probably won’t listen to Blitzen Trapper often, but I’m definitely glad I had the opportunity to see them live. Plus I bonded with the keyboardist over our curly locks, so that was cool.