Tags: boom!, bubblegum pop, everything sucks, farewell, i don't wanna be sad, i don't wanna go to bed, i dream about you, juliet simms, kiss me like nobodys watching, no pads no helmets...just balls, nostalgic, opinion overload, P.S. I hate you, perfectly perfect, pop punk, problem child, simple plan, singing in the rain, taking one for the team, Vans Warped Tour, warped tour 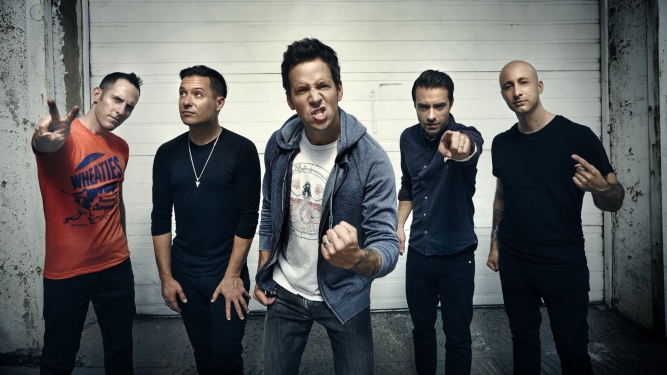 Simple Plan, a pop-punk band based out of Canada, has always been a band that I felt had been placed on the backburner of what people call “good music.” Simple Plan were pretty popular back in the 2000’s before it seemed like they suddenly dropped off the face of the earth in 2011. Back in my middle school emo days, I used to listen to them a lot when “Welcome to My Life” was all too relatable (but maybe I was just very dramatic). And now with the release of their new album Taking One For The Team, emo Jen is ready to make her long overdue reappearance.

“Taking One For The Team” starts off very promising with a strong and heavy guitar driven track “Opinion Overload.” A lot of their old pop punk (and modern day pop punk) influences are bleeding through. This song is basically a middle finger to anybody that tries to tell them what to do. It’s very catchy and has me excited for what the rest of the album has to offer.

The tracks “Opinion Overload,” “Boom!,” “Farewell,” “Nostalgic,” and “P.S. I Hate You” are all anthems that stay true to the pop punk genre. I close my eyes, and it felt like I was at Warped Tour rather than the Pentacrest lawn as I listened to these songs. They combine fast-paced punk tempos with pop-influenced melodies, the perfect blend for those that don’t particularly enjoy hardcore music but enjoy something heavier than bubblegum pop.

The tracks “Kiss Me Like Nobody’s Watching,” “Singing In The Rain,” “Everything Sucks,” “I Don’t Wanna Go To Bed,” and “I Don’t Wanna Be Sad” don’t really feel like they fit in this album. While the themes tie in with the overall themes of love, good vibes, and not giving a damn what anybody thinks, their melodies and tempos seem to fall more on the pop side of pop punk. They aren’t bad songs, but they are scattered throughout the album. They feel misplaced, pulling me out of my head, jolting me awake and making me conscious of the fact that the songs don’t flow from one song to the next.

The listeners are pulled in with the slower acoustic songs “Perfectly Perfect” (which honestly, I was hoping would be a play on their song “Perfect” from their debut album “No Pads, No Helmets…Just Balls,” but it turns out it is just a love song (*sigh*).

“Problem Child,” and “I Dream About You” are both melodic and almost sappy in a way. “Problem Child” is the song that most resembles the themes of “Perfect.” As we can see, the band is still struggling with their childhood and with accepting the past. “I Dream About You,” which features female vocalist Juliet Simms, brings an interesting pop dynamic to the album.

All in all, this album was only mediocre compared to their earlier albums. It feels very split between their roots of pop punk and wanting to evolve into a poppier sound. The songs jumbled together don’t feel like they make up an entire album, leaving the album feeling incomplete.