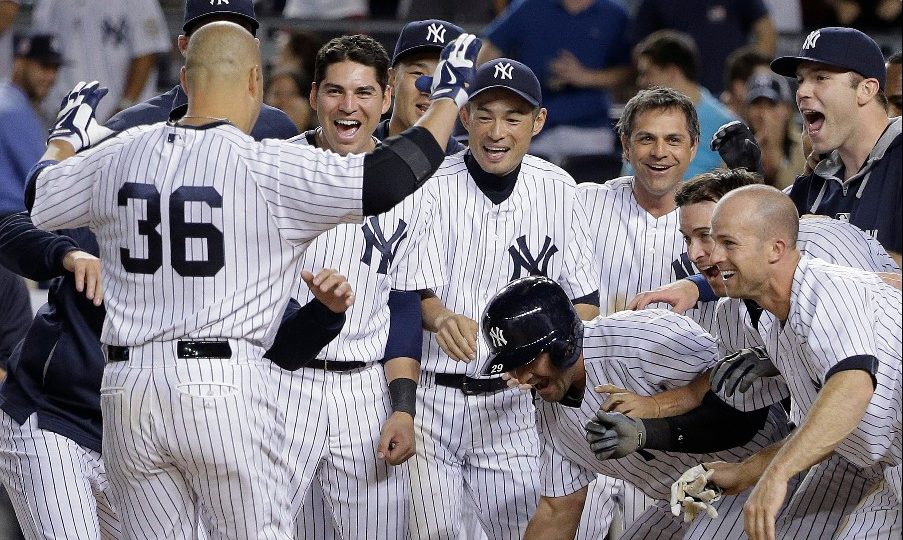 The New York Yankees find themselves in an unfamiliar situation heading into 2015. For the first time since I was born (1995), Derek Jeter will not be playing shortstop for in New York. The Yanks are made up of a talented pitching staff and experienced position players. They made a couple moves to help their cause heading into the new season. Lets take a look at the 2015 changes.

I used the word experienced rather than old in the intro but the words are interchangeable. Didi Gregorius is the only starting position player who is under 30 years old. The Yankees offense will struggle to hit and stay healthy in 2015. There’s no question that this team is just… different than the normal Yankee squad. There is still talent in the lineup, but it will be interesting to see if that talent will show. Alex Rodriguez is returning to the Yankees…. Okay I’m going to talk about A-rod for just a minute because I think it’s important. Why!? Why on Earth is this guy still allowed to step foot on a baseball diamond. In the last article I talked about Brock Holt who does everything right. Holt is a good teammate, he hustles, he puts his all into his work and most importantly he does it with integrity. A-rod, on the other hand, does not. He was blessed with a rocket arm, an athletic body and all the tools to be one of the greatest players of all time. What did he do with it? He spat on it. A-rod is decided that he is better than the system and has broken the rules on multiple occasions. He has no integrity and no respect for the game of baseball. The greatest moment of the 2013 season for me was when Ryan Dempster threw behind A-rod on the first pitch, and then drilled him on the second. Everyone on the planet knew that it was intentional, even the umpire. The umpire did not eject Dempster from the game, showing he thought A-rod deserved it. I’d do the exact same thing if I were a pitcher. It’s beyond me why Pete Rose is banned from the game yet A-rod gets to play. Something seems backwards here. I hope for nothing but the worst for A-rod and I’m not afraid to say it. He had his chance.. correction CHANCES, and he spat on them. The game will in a better place when he finally retires.

Lets get back to talking about the rest of the team. I think the pitching staff will be more effective than some think. It was announced today that Masahiro Tanaka will get the nod to open the season. This is the first time in 6 years that CC Sabathia will not be the opening day starter for the Yankees. Tanaka was outstanding in his rookie season finishing with a 2.77 ERA through 136.1 innings. An arm injury limited Tanaka in 2014 but the Yankees hope and believe it will not be a problem this season. Tanaka has an effortless delivery with a large repertoire of pitches. His split-finger is flat out filthy and will confuse hitters all year. It will be important that he stays healthy in order to lead this rotation in 2015. Michael Pineda will be the second best pitcher in the rotation and will try to capitalize on a full season. He missed a lot of time due to injury and suspension in 2014 but he was one of the most effective pitchers in the game when on the field. He finished with a 1.89 ERA through 76.1 innings of work. He has a mid 90’s fastball to go along with a nasty slider that he can put wherever he pleases. CC Sabathia finds himself as the third man in the rotation to start 2014. He hasn’t posted  a sub 4.00 ERA since 2012 when he finished with a 3.38 ERA through 200 innings. He has lost his velocity and movement on his fastball and slider. He came into spring training much heavier than the last and has also gained some of his velocity back. His fastball touched 96 MPH this spring, surprising everyone. It will be important for CC to stay healthy and keep his velocity to be effective in 2015.

The bullpen is led by Andrew Miller and Dellin Betances. Miller finished the 2014 season with a 2.02 through 62.1 innings. He is exceptionally tough on lefties. Betances was a breakout player in 2014. He posted a 1.40 ERA through 90 innings last season. Betances should be used as a closer in 2015 and will close games with ease. The addition of Miller gives the Yankees a deadly setup/closer combo.

Nathan Eovaldi will now be pitching in a hitter friendly ballpark. He struggled last season with the Marlins, finishing with a 4.37 ERA through 199.2 innings of work. (I’d be pretty upset to fall 1 out short of 200 innings… just saying.) Eovaldi has a live fastball but struggles to control it. He falls behind in counts often, giving the hitter a strong advantage. He will have to work on his control and secondary pitches but if he can improve in those areas, he will be a solid Major League starter. If healthy I expect:

Beltran has had one of the most solid careers in MLB history. He has a career batting average of .281 and a .491 slugging percentage. He struggled for the first time in 2014, finishing with a .233 batting average and driving in 49 runs. Yankee fans can only hope that last year was a fluke for Beltran. If Beltran is hitting .275+, he will bring the entire team up with him. He has a leadership quality that few players have. Put in simpler terms.. If Beltran rises, the team rises. If Beltran falls, the Yankees fall.

The Yankees will go as far their health will take them. They have a history of injuries and are a team filled with age. The pitching rotation should be strong and will be backed by a solid bullpen. The position players will have to stay healthy if they want a chance to contend in the AL East.