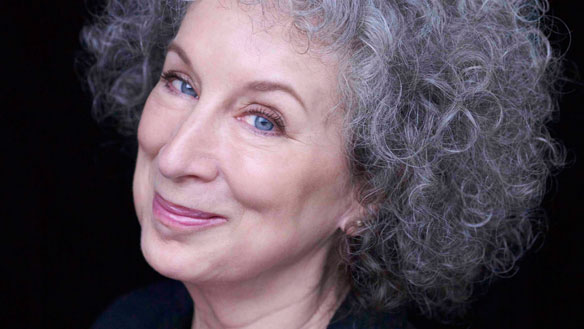 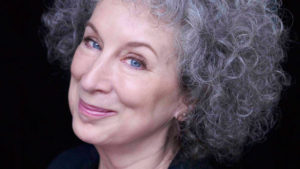 The Englert was at full capacity, and even though I lucked out by slipping in after that announcement, which meant I had to stand in the back the entire time.  The theater was a diversified pool of all ages and I wasn’t the only one standing along the outskirts of the theater.

Atwood, the author of The Handmaid’s Tale and dozens of other ward-winning pieces of literature, claimed to have no area of specialization.  So naturally, she talked about zombies, other monsters and non-humans in writing, where the science came from in her latest book, Mad Adam, the importance of story-telling, and hope.

Throughout her discussions, I began to wonder if I was at a lecture or a comedy show.  Jokes about cats, the internet, penguin mating, and her own hair were truly laugh-out loud experiences.  Intrigued by science, Atwood expressed a love for breeds of characters she could create with seamless logic.  In addition she addressed the question many people ask her, “why do you write”, with utmost rationale.

“Story-telling is part of the human tool kit,” she said.  “It’s what human being do.”

Finally, Atwood left the audience with the notion that there has to be hope in the world.  She, again very logically, explained hope is built into the human being as a means of survival—humans without hope would go extinct.

Satisfyingly surprised, I will certainly be attending lectures more often.  While I expected a dry discussion of literature what I got was a personality come to life on stage.  Margaret Atwood was just as comical as she was pragmatic, and I left the Englert Theater feeling both enlightened and entertained.