February 8th was the 2014 National South Asian A Capella Competition, otherwise known as Gathe Raho.  A Capella groups compete by singing Hindu-American song mash-ups.  Here are some reasons it was one of the best things that have happened so far this year and why you should go next year:

1. It’s a national competition of the seven BEST groups in the entire country, and University of Iowa hosts it in the Englert each year.  Talk about convenient.  It was just ten bucks and totally worth it.

2. The entire show is a phenomenal clash of Hindu and American culture.  Bollywood songs fused with Beyoncé.  Traditional saris are mixed with snapbacks.  The dancing is a combination of something you might see in a Bollywood film and something you might see in Step Up.  The best Hindi-English mash-ups of the night were an Imagine Dragons fusion, a Muse fusion, and Backstreet Boys fusion.

3. The crowd gets totally into it.  They chant their favorite team’s name.  They scream when the cute beat boxer has a solo, or clap along with the beat.  They form fan clubs. 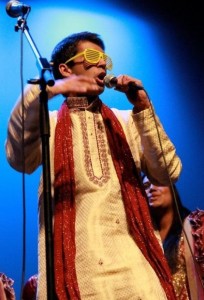 4. Yes, it does feel a little like you’re watching real life Pitch Perfect.  I mean, they have the pitch-pipe that they blow before each song and everything.

5. Just because it is a cultural event does not mean it’s exclusive.  The teams are made up of students of all different races.  And the Bollywood songs are completely rad, especially with how they weave into songs you already know really well.

6. This may go without saying, but a lot of these people competing have magnificent voices.  Honestly, at one point there was an angel on stage and he was singing Give Me Love by Ed Sherran and I almost died.

7. Get outside your comfort zone.  More than once I remember thinking, “how exactly did I end up watching the National South Asian A Capella Competition again?”  Attending an event like this really put into perspective how much diversity and culture we have here in Iowa City.  In my opinion, if you’re not submersing yourself into something different every now and then, you’re not doing college right.  Try to attend an event like Gathe Raho at least once.

Carnegie Mellon’s team, Deewane, won the competition and took home the prize of $3,000 while Michigan’s Maize Mirche team took home $1,000 for second.  University of Iowa hosts Gathe Raho every year, so plan on coming for the 2015 competition.  It’s an unforgettable experience.  And if you can’t wait till then, on March 1st in the IMU will be hosting Nachte Raho, an Indian Dance off contest. I’ll be there with my sari.