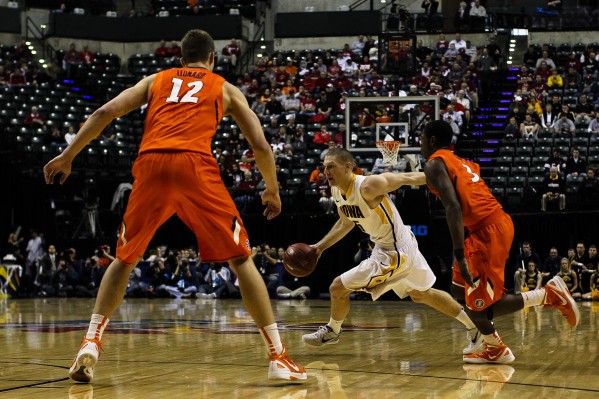 In the opening game of the Big Ten Tournament, the Iowa Hawkeyes had a chance to avenge a decisive conference loss — and won.

In its second game of the tournament, the Hawkeyes had the same opportunity, but were dominated by the Big Ten’s top seed, the Michigan State Spartans.

In Iowa’s opening game, senior guard Matt Gatens played like his Iowa career was on the line, because it was. The Iowa City native poured in 20 points, shooting 7-12 from the field.

It was also Gatens that keyed Iowa’s seminal rally. After Illinois center Meyers Leonard hit a jumper that put the Illini up seven with 14:14 to go, Gatens went to work. The senior hit a three-pointer, stole the ball, and slammed it home to cut the Illinois lead to two points. Gatens’ five points in 22 seconds began a 20-6 run, capped by a jumper by the captain, for the Hawkeyes that put Iowa up 57-50 with 9:19 to go.

Gatens said after the game he was driven by a desire to not have to take his Iowa jersey off for the final time just yet.

“I don’t want to go home,” Gatens said. “I want to keep playing. I don’t want to take this uniform off, and I think all the guys up here and in the locker room feel the same way.”

Gatens’ defense on Illinois’ Brandon Paul was another part of his performance in his first Big Ten Tournament win. Paul was held to four points on 2 of 11 shooting.

Iowa head coach Fran McCaffery, who has been outspoken in his belief that Gatens was a Big Ten All-Defensive Team snub, lauded Gatens’ defensive efforts.

“I could come up with a number of superlatives, but it’s the same effort every night,” McCaffery said. “I think he’s the best.”

Aaron White also supplied a much-needed second half for the Hawkeyes, scoring nine points and grabbing seven rebounds in the second half, 13 and 9 for the game.

The Hawkeyes rallied from a first half where it seemed that Leonard was unstoppable for Illinois. The center led Illinois with 10 first half points, and made five of his six field goals, most from within two feet of the hoop.

However, Iowa’s defensive effort stepped up in the second half, and while Leonard still scored eight points in the final half, he was less of a factor.

The game would prove to be the last for Illinois coach Bruce Weber, who was relieved of his duties Friday morning.

The Hawkeyes’ rebounding edge would flip on Saturday, as Iowa was outmuscled by Michigan State, 92-75.

Although Michigan State head coach Tom Izzo said he didn’t have a great game, Big Ten Player of the Year Draymond Green led the Spartans with 21 points, 10 rebounds, and 5 assists.

The Spartans dominated in the paint, scoring 44 in-the-paint points to only 20 for Iowa.

Gatens had a tough time against a suffocating Spartan defense, as the senior was held to 10 points in what may be his final game.

For the first roughly ten minutes of the first half, the Hawkeyes were able to stay right with Michigan State, as the game was tied at 22 at the under-12 media timeout. Zach McCabe, who knocked down three three-pointers in the span of five minutes to spark the Hawkeyes, led the early Hawkeye charge.

It was another underclassman, freshman Josh Oglesby, who picked up the scoring in the second half to keep Michigan State from completely running Iowa out of the building. Oglesby scored 15 of his 20 points in the second half, and shot 5-7 from three-point range for the game.

The Spartans, however, were too much for the Hawkeyes to handle. Adreian Payne scored 16 points and hit 7 of his 8 shots, Keith Appling made all of his shots for a 12 point game, and Travis Trice knocked down three of Michigan State’s eight three-pointers.

After the game, Iowa athletic director Gary Barta all but ruled out a CBI berth for the Hawkeyes, saying that Iowa’s goal was to be among the nation’s top 100 teams. Sophomore guard Devyn Marble said he hopes the team gets that chance.

“I think it would mean a lot to the team and the program,” Marble said. “Guys like Matt haven’t had the chance to play in the postseason yet, so hopefully we get chosen.”