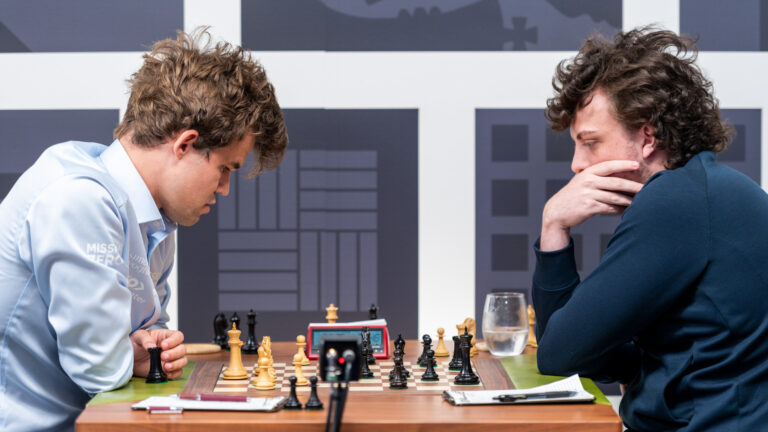 Chess is a magnificent sport. Like football, basketball, baseball, and other sports played at the highest level, there are always heroics. Some players, through their dominant play, are box-office. Their styles and strengths clash with opponents to create fireworks over the board.

Unlike most other sports, chess is 99% mental. Though some matches can last 8+ hours and be physically draining (imagine an 8-hour final exam), players are not measured by their physical abilities. The result? Chess is branded as a boring pursuit for nerds. Exciting words like “scandal,” “shocking,” “blacklist,” and “lawsuit” aren’t typically associated with chess.

Right now, these words are exactly what people associate with chess. To answer why that is, we need to meet the two players at the heart of chess’s greatest controversy in recent memory: Hans Niemann and Magnus Carlsen.

Hans Niemann is 19-year-old American grandmaster (the highest title in chess) and a self-taught prodigy. He has risen into the top 40 of the world rankings per FIDE, chess’ international governing body. Niemann’s recent vault into the world rankings has been scrutinized by many, with some labeling his recent rating spike as “suspicious.” Niemann has previously admitted to cheating in online Chess.com games at ages 14 and 16. He maintains absolute innocence in his over-the-board (in-person) career.

Magnus Carlsen, a 31-year-old Norwegian grandmaster, is the five-time defending World Chess Champion. He holds the record for highest recorded ELO rating of 2882 and is regarded by many as the greatest chess player of all time. Recently, Carlsen has announced his goal of reaching an ELO rating of 2900- a mark historically thought impossible in classical chess.

On September 4th, 2022, Niemann defeated Carlsen in an over-the-board tournament in St. Louis. Shortly thereafter, Carlsen withdrew from the tournament and released this cryptic tweet:

At their next game against each other, Carlsen resigned the game after one move, seemingly in further protest of Niemann. Although Carlsen had, as of yet, refrained from explicitly accusing Niemann of cheating, all signs pointed to his actions being accusatory. On September 26th, Carlsen released a statement that officially accused Niemann of cheating “more- and more recently- than he has publicly admitted.” In his statement, Carlsen intimated that he believed Niemann cheated in their over-the-board game in St. Louis but fell short of directly expressing this.

In the aftermath, Niemann’s reputation has suffered greatly. He was disinvited from the Chess.com Global Championship and all future Chess.com events. Carlsen and Chess.com, the most famous player and largest online chess website, respectively, hold significant influence in the chess world. Many other players and pundits have speculated on whether or not Niemann cheated in his victory over Carlsen, further propagating the scandal.

Remember the “beads”? That’s the leading theory as to how Niemann may have cheated- an accomplice relaying chess engine (computer-assisted) recommendations via vibrating signals from a…strategically placed apparatus. This is, in many ways too obvious to state, a ridiculous theory. It also happens to be taken seriously by many who believe Carlsen’s accusations and is their best explanation thus far.

Notably, Chess.com released a detailed report in which they analyzed many of Niemann’s games on their online platform. They agreed with Magnus that Niemann had likely cheated more often and more recently than his previous admission had suggested. However, they also concluded that there was no evidence that Niemann cheated in his Sept. 4th game with Carlsen.

Less than 7 weeks after that fateful game in St. Louis, Niemann filed a lawsuit against Carlsen and numerous other defendants in United States District Court. He levies five distinct accusations, including slander (defamatory oral speech), libel (defamatory written speech), and civil conspiracy. He is asking the Court for a “money judgment of…[no] less than $100,000,000.”

I have read the 44-page complaint. Here are some salient takeaways:

1) a false statement purporting to be fact;

2) publication or communication of that statement to a third person;

3) fault amounting to at least negligence; and

4) damages, or some harm caused to the reputation of the person or entity who is the subject of the statement.

The 3rd prong that mentions “fault amounting to at least negligence” is actually more involved than it sounds. Proving fault to such a standard involves an entirely separate test. Such cases require extensive fact finding- facts which will likely be difficult and expensive to establish.

There are two sides to every lawsuit. Either this is an attempt at blacklisting, or not. To me, it sounds like mere expression of personal beliefs. Granted, any smart person wishing to blacklist another would not use the term “blacklist” or anything so transparent. However, this seems more like protected speech.

If I had to guess, the parties settle out of court for no more than five or ten thousand dollars, and this never goes to trial. The requested $100,000,000 in damages, as well as inclusion of multiple defendants, seems like a positioning move with a settlement in mind. Niemann’s lawyers know that this lawsuit is an uphill battle. So, they threw in the proverbial kitchen sink and are hoping that it moves the damages needle. Nevertheless, nobody knows how this will play out. In this shocking scandal of beads and blacklists, it’s too absurd to predict the possible contingencies.

So, is this good or bad for the sport? I have absolutely no idea. Only one thing is clear: the chess world has not been this exciting in many years.

We can only wait for additional facts to fill in the gaps. The lawsuit, unsurprisingly, is free of “beads” references. But that has not stopped the scuttlebutt.

Ben is a first-year law student at the University of Iowa College of Law. He is an avid Lakers fan, chess player, and loves reviewing/writing about music and sports. He, too, has NO IDEA what “beads” are.