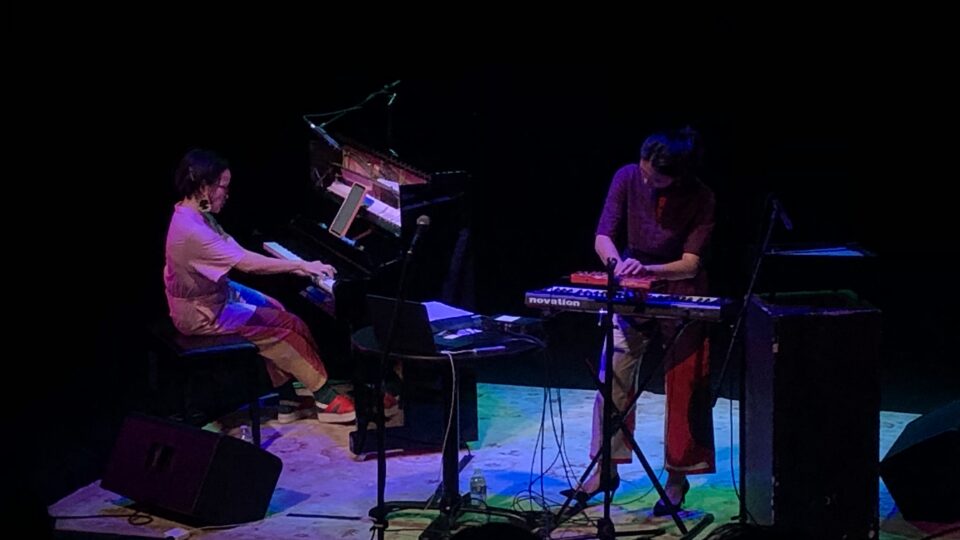 Chromic Duo’s interactive performance at the James Theater created an atmosphere unlike most classical music performances, making them a perfect fit for the third installment of the Witching Hour program.

A collaboration between the Englert Theater and Little Village Magazine, Witching Hour “welcomes artists and thinkers to push the boundaries of their respected crafts.” With classical music traditionally being a sit-and-listen type of performance, Chromic Duo provided a refreshing take by centering their performance around audience interaction.

The duo’s staple toy pianos and audio mixers sat onstage as audience members trickled in before the show. Accompanying the instruments was a poster board with the question “What identity do you hold?” Post-It notes and golf pencils were passed out to audience members to write down their answers.

Known for their playful performances and inspired by self-discovery, Chromic Duo played compositions of nostalgic sounds. The music encouraged listeners to either escape or embrace their identities.

The first composition resembled a song chosen for a film’s ending sequence. Music swelled in crescendos of hopefulness, adding clarity to uncertainty. The hazy pink stage lighting incorporated with the uplifting soundscape transported me to a state of ease, reminding me of the carefree child that I once was. And that’s what was so compelling about Chromic Duo’s show— you got to decide the story that fit the composition and let it take you closer or further away from your identity.

After two more compositions, Chromic Duo performed “Homecoming,” their fourth and final piece of the night. Inspired by their Asian-American identities, the piece delved into the violence towards Asian-Americans amid the 2020 pandemic. The piece included snippets of spoken interviews and poems, along with an augmented reality experience.

Audience members scanned a QR code at the beginning of the show, leading them to a scenery of floating lanterns. Although each person in the audience had their own interpretation of the performance, we were all brought back together through the shared AR experience.

Chromic Duo’s performance was a one-of-a-kind experience that allowed audience members to experience a new form of classical music performance— something we don’t get that often.