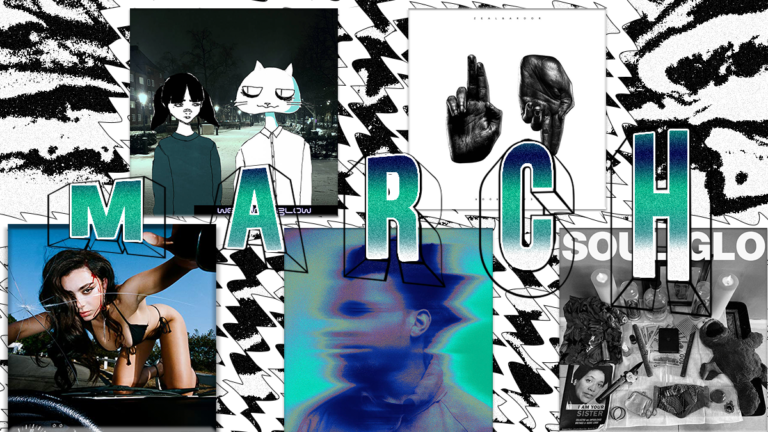 On Weatherglow, 5th-wave emo icons Weatherday and Asian Glow, masterminded by Sputnik and Gyungwon Shin respectively, team up to create a new high-water mark for the genre. While these recordings may sound comparatively hi-fi beside Weatherday’s Come In, and a bit closer in production style to Asian Glow’s Cull Ficle, the raucous, DIY ethos is present as ever. Dirty guitar textures blanket an atmosphere of shoegaze and pair it with vibrant riffs and intimate vocal performances. This duo’s comfortability in both crooning and screaming allows them to convey a full range of feeling while writing lyrics that sidestep cliche completely. No one else would sing lyrics like those on “Clockwalk Around the Ache”: “All of my penetrated spells were found to head to you through the neon signs / If we come to break right in time, no longer suffer from each other.” It is a loose poetry just barely audible under the scuzz of guitar and crashing cymbals. Most impressive is how they pull off something only the best emo bands can–they make melancholy really rock. A song like the opener, “Melt a Bed” showcases the variety of their strengths–from the starting get-up-and-jump riff, to the middle section of ambient, crackling synths–the band jumps between levels of energy with such ease that the song is barely more than three minutes–no big crescendoes necessary. “Look Alive, Sunshine”, meanwhile, has some of the catchiest melodies in either of the bands’ catalogs–a feat of its own. Weatherglow is an accomplishment that packs the brilliance of five genre-defining albums into one EP.

Denzel Curry has never been one to cling to a single style or sound. While he may be best known for his more energetic tracks, complete with jarring, horror-esque production and raucous delivery, he turns away from his signature sounds in favor of a more reserved sound. Many of the beats are much more relaxed than on Denzel’s previous albums, but they still cling tightly to the alien, foggy sounds that are a key component of Denzel’s musical reputation. While the sound may not be as striking, the beats are still filled to the brim with zest and still capture Denzel’s musical personality flawlessly. While he has never shied away from opening up to his listeners, the emotion and tenderness is particularly dense on this record. On the lead single, “Walkin”, he touches on his personal demons and expands on how this struggle is not unique to him, but is a struggle brought on to many by the system. He preaches over a simple yet smooth beat, with a graceful beat-switch in the middle of the track that he glides over with multiple flows. On “Ain’t No Way”, one of the album’s more zestful cuts, Denzel joins forces with 6LACK, Rico Nasty, J.I.D., Jasiah, Powers Pleasant, and Kitty Ca$h, all of whom add a unique element to the track in what is by far the most feature-heavy song on the album. On “X-Wing”, Denzel’s originality in his production blossoms, fusing angelic strings and piano melodies with classic trap 808s and drums. This direction of sound and theme may not have been what most fans, including myself, expected, but the direction Denzel chose is clear and executed with few flaws.

After working with some of the most acclaimed artists in the hyperpop hemisphere, such as the late SOPHIE herself, Charli XCX has returned to rip out the barely beating heart of the pop industry to take a nasty bite. On her latest release, Crash, Charli plays up the big popstar trope with lavish outfits, choreographed dances, and even bigger hair while the music follows suit, drawing heavily from the glam pop of the 1980s and millennium-age dance pop. This tongue-in-cheek incarnation of the “pop diva” stereotype is elevated by the undeniably catchy and commanding pop songwriting the singer consistently brings to her work. On tracks like “Beg for You” and “Used to Know Me”, Charli interpolates the classic 00s hit “Cry for You” by September and the 1992 track “Show Me Love” by Robin S. These odes to her so-called pop foremothers not only uniquely reimagine the tunes, but also imbue the record with a shot of pop gold from the past. While it veers hard into the campy realm of mainstream pop, this record also steps away from some of the heavier hyperpop work she has done recently, specifically on her last release in 2020, how i’m feeling now. Throbbing bass and erratic synths are replaced with nostalgic, shimmery keys and light-footed staccato beats on the tracks “Constant Repeat” and “Lightning” just to name a couple. Though, while she may be moving into a territory that some consider superficial, over-the-top, and predictable, Charli proves that she is anything but your run-of-the-mill pop princess. She is indeed the bloody queen of the pop charts.

To live in the US diaspora population, in my experience, is to be in many ways removed from the culture some would assume of you. It is to recognize you live in a deeply racist, nationalist country while also recognizing, with respect to people in destabilized countries, that much of the terror the US perpetuates is somewhere far away. Of course, this is in no way equal for everyone in the US diaspora (it helps to be white, for one!). On Diaspora Problems, Soul Glo meets these contradictions with wit and grace–and a whole lot of energy. Sonically, the band sits beside emotional hardcore acts like Orchid and Converge–but with an added undeniable sense of groove. As vocalist Pierce Jordan cascades between high register screams and low register rhymes, he reminds the listener how negligible the line between rapped hip hop vocals and screamed punk vocals has always been. Afterall–what hip hop fan could possibly deny “Driponomics” with Mother Maryrose for the banger it is? While the quickly screamed lyrics can be a bit hard to make out, they’re well worth a look-up. Jordan writes about emotional subjects with great humor. Jordan’s lyrics are less about being some dialectical literary dork that politically “dropkicks MGK” and more about being–and through being the inherently political nature of just living on appears. But outside of any lyrical content, the passionately performed music on its own packs more of a punch than your average hardcore record. Soul Glo’s Diaspora Problems is the most exciting punk album to come out in a long time.

There’s something to be said for musicians who ensure that a constant je ne sais quoi permeates their art; something that tells the listener, “Hey, you’re listening to my album!”. In the case of Zeal & Ardor, their commitment to creating a world through their music that asks, “What if enslaved people in America turned to black magic as a means of escape?” is right up that alley. The Swiss sextet’s newest self-titled album is both ambitious and insular in its sound with tracks like “Emersion”–a synth backdrop coupled with unintelligible death metal shrieks–and the blistering bare-bones black metal “Götterdämmerung” sharing space in this release and neither feeling out of place. Of course, the true highlights are when lead singer Manuel Gagneux brings out his blues-inflected vocals like on singles “Church Burns” and “Run”. Altogether it’s a dark churning mashup of the humid South and freezing Europe with something on it for just about everyone.