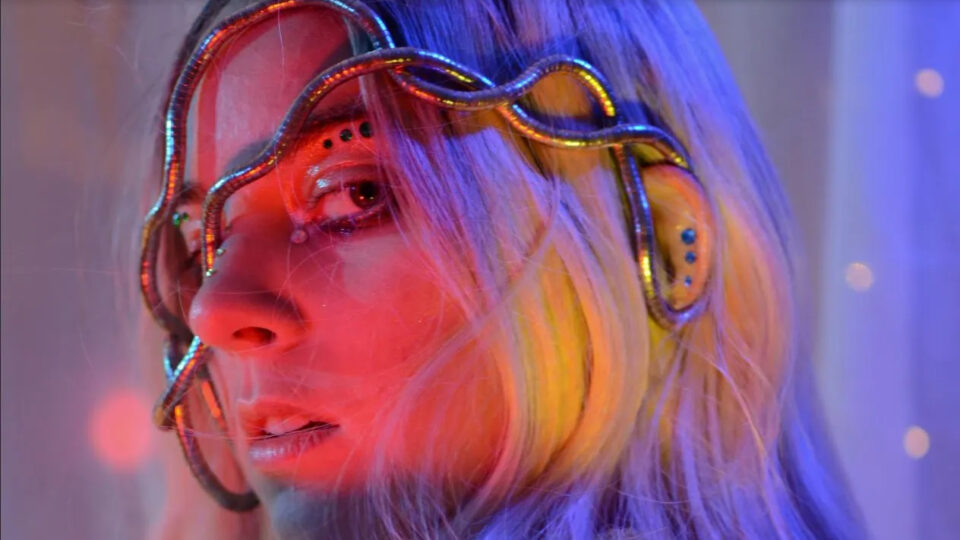 Going into the Eve Maret show, I had no idea what to expect. All I knew about Maret was her artist bio on the Witching Hour’s schedule: “a Nashville-based experimental artist and composer who employs a wide array of electronic media and techniques in her various disciplines.”

I arrived at Gabe’s almost an hour early, so I had plenty of time to take in the pre-show scenery. A combination of pink, green, and blue LED lights lit up the stage against the otherwise dark background.

Maret’s show was preceded by an eerie selection of techno music. The sinister-sounding scrapes, heavy bass, and garbled vocals nearly scared me out of the upcoming performance. But as Maret’s show drew closer, the music mellowed ever so slightly, easing my nerves.

To my surprise, at 8:59 p.m. Maret stepped out from right behind me and made her way to the stage. I didn’t realize that the person having a casual conversation with the man behind me was the artist that I had come to watch and review.

The blue light faded so Maret was surrounded only by pink and green. Her shirt had intricate geometric patterns, and her laptop was adorned with a butterfly sticker and another sticker that read: “You don’t hate Mondays, you hate capitalism.”

As soon as Maret began performing, any pre-show fears I had were immediately calmed. The winding synths were very pleasing to the ear, and the music pulled me into a trance.

Maret seemed like she was in a trance of her own, as she bobbed her head back and forth to her own sounds, working to find the right vibe. Watching her turn various dials on her synthesizer was like seeing a perfectionist at work. She made small, delicate movements focused on her craft.

In fact, instead of feeling like I was watching Maret perform for a crowd, I felt like the crowd was simply watching Maret in her own private creative space. The upper level of Gabe’s was transformed into a techno music studio within just a few minutes of Maret taking the stage.

Even if Maret didn’t seem to notice the crowd in front of her, the crowd responded well to her set. She effortlessly commanded everyone’s attention as the music swirled around us, causing some to sway their bodies or nod their head in response.

The bright, upbeat sounds eventually transitioned into a darker interlude, where the various sounds were centered by a heartbeat-like rhythm. Heavy bass shook the walls and floor, and mysterious rustling notes created a sort of sound tornado.

Maret then transitioned out of this interlude into a new, upbeat sound reminiscent of the beginning of her set. The transition out of the darkness was as smooth as the transition into it. She played with volume, at one point dipping the music low enough to hear the hum of the crowd. Someone took this moment to let out an encouraging “Whoop!”

Maret ended her show just as casually as she had started it. The crowd applauded enthusiastically, deeming her performance a rousing success.

I was so impressed by Maret’s set that I decided to purchase a copy of her 2018 project, “No More Running,” on CD. I left Gabe’s feeling like I had just discovered something very special.