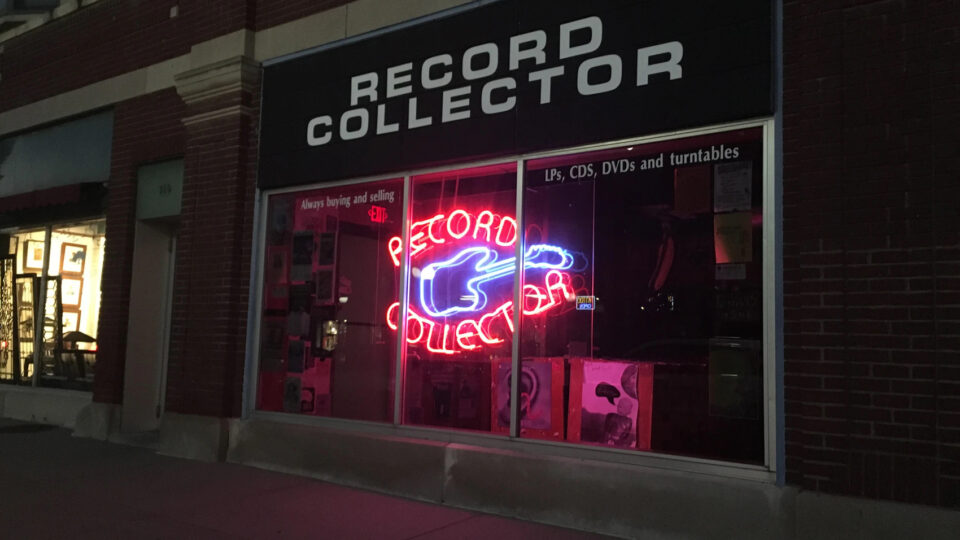 Bobby Larson’s long history with Record Collector began before he became co-owner of the store in 2017. He had shopped there since elementary school, but the exact grade is hard for him to recall. Larson guesses that his first time inside Record Collector was during either 4th or 5th grade, when the store’s home was inside the second level of a building on Linn Street that is no longer there today. “I remember being in awe of the place,” said Larson.

Larson describes his journey into music collection as a “natural progression.” He began collecting mainly because he grew up before the era of digital music, when buying a physical copy of an album or song was really the only way to listen to it on a regular basis.

Larson still remembers the first record he ever bought: Grandmaster Flash & The Furious Five’s single “The Message,” on a 12-inch vinyl. This purchase marked his entry into hip-hop, the first genre he really became a fan of. Larson credits hip-hop’s frequent sampling as his introduction to many other genres, such as jazz, soul, and more.

After shopping at Record Collector for years, Larson started working at the store around the summer of 2004 or 2005. It was during this time that he got to know his current co-owner, Alissa Witzke, and former owner Kirk Walther, who passed away from cancer in 2017.

Larson describes Walther as being “totally fanatical” about music. “He knew a ton about damn near everything,” said Larson. He credits the store’s character to Walther, referring to him as the “true face” of Record Collector. Walther was clear about wanting the store to continue, and while Larson says the transition was complicated, he is glad that he and Witzke were able to keep Record Collector running. Customers still come in frequently to share their memories of Walther, said Larson.

Larson’s daily duties include filing new orders, restocking products, cleaning records, and more. “People like to think that working in a record store is like a ‘dream job’, but honestly, you end up busting your butt a bit,” said Larson.

The store’s customer base often depends on the season, but overall, Larson believes that customer demographics are more diverse now, specifically in terms of gender. “It used to be, arguably, kind of a ‘boys club,’” said Larson. Age has always varied widely, ranging from kids and teenagers to adults in their late 70s and 80s, said Larson.

Larson says that vinyl is the most popular product right now, which has placed a lot of stress on the vinyl supply chain and driven record prices higher. He says the shortage began months before the pandemic when an essential factory in California burned down. Larson recommends buying used records amid the shortage, citing lower prices and good quality control.

Vinyl is Larson’s favorite musical format, but he’s not picky about how he listens to his music. He respects digital streaming services, calling them the “modern radio” and a good way to introduce yourself to new music, and Larson is all about finding something new. He listens to so many artists and genres that it has become virtually impossible for him to pick any favorite songs or albums.

“There’s just too many,” said Larson.