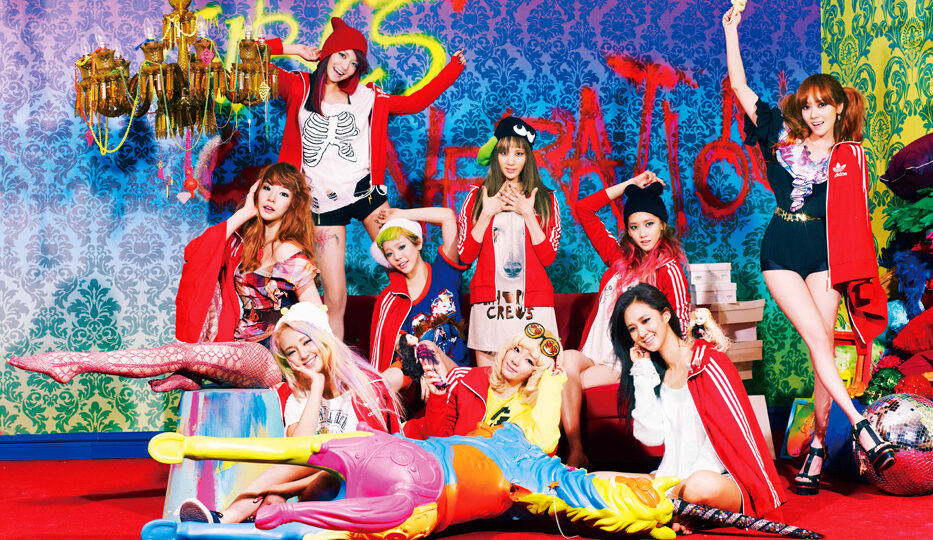 Coming into the K-pop scene fairly recently, I missed the heyday of SNSD (better known as Girls’ Generation in the West). I was still very aware of their influence even then. From 2009 to 2015, they were the most popular girl group in Korea by a long shot. The industry had been focused on boy groups for years and despite a few stumbles in the beginning, SNSD was able to open the door for many other groups. Basically, if you want to understand the modern culture of K-pop, especially girl groups, it would be to your benefit to listen to SNSD.

What follows is 5 singles (or title tracks as they’re known in Korea) that are the best encapsulation of what SNSD brings to the musical table. Along with these picks are three releases by members who have undertaken solo careers and by subunits (a group composed of members within the wider group, fairly common in K-pop). So buckle in, and dive into the world that S♥NE’s (that’s the name of the group’s fans, for those of you wondering) have fallen in love with for over a decade!

5. Into the New World has gone down as one of the best debuts in K-pop history, despite failing to chart at its release. Within this song, you can hear the evolution of K-pop from 90’s rhythms to the more experimental sounds of today. Plus, the chorus even has a little guitar lick, giving it a very cool power ballad feel!

4. All Night was SNSD’s last release before their hiatus in 2017, and even if it is truly their last song, the quality still remains. While the verses and buildup have a very standard “party” sound, the chorus is once again the star, featuring a mix of deep/tropical house beats that are undeniably groovy.

3. Catch Me If You Can might just be as dark as SNSD ever got. With a grimy electro undertone throughout the verses and a killer dance breakdown (don’t forget, music videos are extremely important here), Girls’ Generation successfully warped their sound while keeping it as poppy as ever.

2. Speaking of experimental, when I Got a Boy dropped in 2013, the K-pop landscape would never be quite the same. Everything from dubstep, electropop, and hip hop are thrown together in what is a melting pot of where K-pop was at the time. Some would go so far as to call it the “Bohemian Rhapsody” of Korea. In a weird way, it makes a lot of sense.

1. Gee. Simply the name alone would be enough to get a reaction out of any K-pop fan. For years, this song was K-pop in every sense of the word, and its SNSD at their poppiest. It’s the perfect distillation of the girl group sound, and I have yet to hear anything that can match its sheer staying power.

Throughout their career, SNSD has had two subgroups and multiple solo careers. What follows are my favorites from these that showcase the variety of talent this group has!

SNSD-TTS: This group was formed during a period when many of the other members had prior commitments such as TV shows or movie filming. The remaining three, which consisted of vocalists Taeyeon, Tiffany, and Seohyun, used this lull in activity to release music as SNSD-TTS (the initials of their names). While they were never my go-to unit to listen to, it’s hard to deny the power of their single Holler. The funky brass that underlies the whole song is nigh-impossible to remove from your head after listening, and the trio really gets a chance to show-off their vocal abilities!

SNSD-OH!GG: In late 2017, three members left the label, leaving the fate of the group shrouded. The remaining five members formed a unit as OH!GG, though they would only release one single before falling silent again. I’ve always been more fond of the B-side, Fermata. It’s a softer, more acoustic number that gives off a very cozy feeling, heightened by the vocals and quirky synth in the chorus.

As for solos, I picked three members whose careers have interested me!

HYOYEON: I think out of all the possible routes a K-pop idol can take once they decide to go solo, EDM DJ has never been on the top of the list. Nevertheless, Hyoyeon (or HYO depending on the release), seems to be at the top of her game as an electronica queen. Badster is simply one of the hardest trance songs I’ve ever heard and her collaboration with American artist 3LAU Punk Right Now wouldn’t seem out of place in any Western EDM festival.

TAEYEON: Leader of SNSD, Taeyeon has always held a spot in the top vocalists in the K-pop industry. Her music takes a lot of the same cues as Taylor Swift’s yet she makes them her own melodies. Her debut song I and later singles 11:11 and Fine are all great examples of this sound, and it’s one she proves to be a master at.

YOONA: While more famous as an actor, it’s her music that makes Yoona my personal favorite among the SNSD soloists. Ballads are one of my favorite trends in K-pop, and it’s where Yoona specializes. To You is a melancholy piano tune (done in collaboration with musician Lee Sang-soon) that’s perfect for staying in bed during a rainy morning. When the Wind Blows is carried by a mournful guitar that makes me want to lay in a field of flowers. If you want to be comforted, you can’t go wrong with Yoona!

I hope this guide helps in some way! Next time, we’ll take a look at SNSD’s “brother group” EXO, one of the best selling K-pop artists of all time!