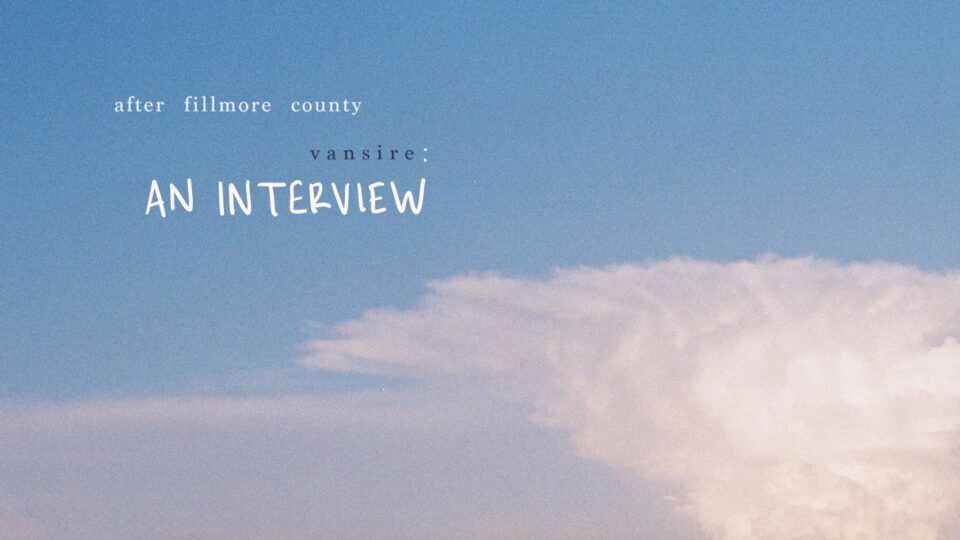 Tuning in to Vansire feels more like you’re dreaming than listening to music. Their music paints pictures, soundscapes that wash through synth loops, propulsive bass lines, and watery guitar arpeggios. Within these ambient, often dance-y textures, their lyrics offer an authentic view into relationships, coming of age, and escapist dreams all set over a backdrop of Midwestern geography and life in a late-capitalist state. Their new EP, After Fillmore County, explores feelings of place, protest, and uncertainty during the social fallout of 2020.

Formed in Rochester, Minnesota by high school band geeks Josh Augustin and Sam Winemiller, the dream-pop duo has garnered over 700,000 monthly listeners on Spotify. The two are now college seniors, Josh at Oberlin College and Conservatory and Sam at the University of Minnesota, still recording from their bedrooms. I caught up with Josh over college, activism, and their new release.

There are a lot of young creatives at the University of Iowa. Tell us about what it’s like to be a college student and a successful musician. How do you manage time between classes, recording, and touring?

Josh: Time management is difficult – touring at least remains a summer-specific activity for us. We’ve definitely had to pass up on some great gig opportunities because of school, like we’ll get offered something for SXSW and then it’s like, nah it’s a Wednesday in March and we have essays due. Ultimately though, I think it’s worth sacrificing some of those opportunities to have degrees. I’m lucky to be studying music at Oberlin so I’ve been able to kind of finesse the work such that sometimes I’m working with professors and focusing my academic time on Vansire. Other than that though, it’s just a lot of staying up late, a lot of logistical headaches, and many hours spent on homework and music work. Nothing particularly glamorous, I’m sure anyone could manage it.

Tell us about the inspiration for this EP. It seems like a portrait of adolescence in the Midwest, something Vansire explores a lot. Could you speak about the ways it might depart from your previous work? Does it have a thesis idea?

Adolescence in the Midwest is a good way to phrase it, though I think if that’s the through line of our discography, After Fillmore County finds us at the end of that loose narrative arc that ties together our past releases. Fillmore County, where we recorded most of this EP, is something of a symbolic stand-in for the mid-American ennui and subtext of escapism which was pervasive in our earlier work. We’re “after” Fillmore County in an attempt to capture a feeling of place and bring to life some kind of collective American experience, but that search is inherently flawed and can’t be realized from the narrow scope of our own lived experience. It’s also literally a question of what comes after living in this part of the world for so much of our lives, as we approach graduation and try to grapple with the uncertainties of the COVID era.

The band has a pretty active political voice on Twitter and there seem to be protest references and anti-capitalist themes working their way into your discography. Do you plan on using more overt messaging in your music in the future?

Previously we would sometimes post about causes and issues we felt passionately about, but coming out of the protests stemming from George Floyd’s murder this last summer, we’ve taken a more direct route in terms of voicing our beliefs about the complete abolition of police and prisons, the need to move away from capitalism, articulating different leftist beliefs we think are important to share, etc. I think our initial hesitancy back in the day stemmed from concerns over engaging in what might be viewed as empty virtue signaling – we don’t have a particularly big social media platform so whenever we used to post it would sort of be like, hm, is this really accomplishing anything other than positioning ourselves as a politically virtuous band? Like, we believe in what we’re saying, but all this is doing is sitting there and getting a couple hundred likes and it’s unlikely any information we’re sharing is new to anyone seeing the post. So it felt kind of self-serving.

But that perspective changed for us this summer in Minneapolis, where the immediacy of the protests hit us like, oh shit, they’re f***ing firing rubber bullets, people are getting tossed in non-socailly distant holding cells, these local organizations are in desperate need of money, we need to share that Minnesota Freedom Fund link, there are people who don’t have access to the food and medical care they need right now, etc. So I think our previous more cynical view gave way to this belief that we should always be hyping different causes and that there are ways to do it that maybe push and are not self-serving, articulating beliefs that might be unpopular with some segments of our listeners, disagreeing and arguing more directly on behalf of certain causes even if it means losing some fans, and just speaking authentically to what we can from our own perspective and what we’ve seen. Obviously none of this is to say we’ve “figured it out,” quite the contrary, we’re still learning a lot about abolition and allyship is an ongoing process of self interrogation and self improvement. But to the original point in your question, yes, more overt anti-capitalist messaging is always the goal nowadays.

For more on Vansire, commodification, and aesthetics in late capitalism, check out The Rest is Metamodernity, an essay written by Josh Augustin

How did the collaboration with Mick Jenkins happen? Central Time slows down and switches tone pretty dramatically during his verse–The Latter Teens has a similar shift. What inspired that ending to the track?

Before contacting Mick we already had it structured with the twelve bar half-tempo coda, and we knew we wanted someone from the midwest to rap on that part. Mick was at the top of our list and he got back to us super quick so it worked out really well. In terms of the construction of Latter Teens, I think it’s just a space we wanted to linger in for awhile longer, and we’re both suckers for a good ambient interlude so it felt like a logical opening statement for the EP.

You also work with Ivy Sole and FLOOR CRY in this EP, two artists that show up elsewhere in your discography. How did those collaborative relationships start?

We found FLOOR CRY’s work after our song Eleven Weeks was posted on the youtube channel TheLazylazyme next to a track of hers around the same day. We started talking after that and since then she’s become a great friend and frequent collaborator. Kind of similarly, I first heard Ivy Sole’s 2016 album on bandcamp shortly after it came out –  we were looking for someone to feature on the chopped and screwed section of the song Set Piece a few years later and her feature worked beautifully. Stoked we can have both of them on this project again.

What was the inspiration behind ending the EP with a callback to a track from your first album?

The back half of the album is something of a chronological retrograde, starting with ‘To Not Pretend’ (a song we dropped under a different band name in the year 2017). Generally speaking, the lyrics and general sound of Water Boils place us at a logical ending point for this EP, entering the winter and unsure about everything around you. The cyclical nature of life, relationships, places, weather events, etc. are all kind of a subtext on this EP and closing out with a slightly revamped sample of Water Boils felt natural to us. The final moments of the EP are the tail-end of that song being played on a reel to reel I recently purchased.

Has covid altered your creative process and/or environment?

I don’t think it’s really changed anything in terms of creative process or environment. We’re very used to working remotely and working in our bedroom, so nothing has really changed from that standpoint.

What made you speak out about how streaming services collect and distribute royalties to artists? Do you have any thoughts about other models for music streaming online that are better at compensating independent artists?

I think that’s twofold, the first part being complete disillusionment with how difficult it is for artists to make a living. Nearly everyone I know works a second job, it’s just impossible to make enough money off of these platforms. You have to be super notable, or tour constantly which is exhausting and currently impossible. And the second part is that most music listeners don’t realize how bad the situation is. Generally speaking most are aware that the payout rates are pretty bad, but like, they probably don’t realize their favorite artist is working two or three extra jobs to make ends meet. And even worse, the streaming services try to position themselves as “friends” of the artist which is a complete joke. In terms of a more equitable model, I think the only thing that would really work at this exact moment is that your DSP subscription costs ten times more than it currently does, and payout rates get higher for artists. That might sound untenable but it’s kind of astonishing that you can basically pay five dollars a month for infinite music any time you want. Also these platforms aren’t even profitable anyways, so I think something drastic is the only answer.

What do you have planned after graduation?

Tentative plan is I’ll head back to Minnesota and move in with Sam, and in the short run we’ll probably be working on new tunes. Most of my friends who just graduated are unemployed or struggling jumping between jobs so given the circumstances it’s really a pretty good option.

Vansire’s new EP, After Fillmore County, can be found on streaming platforms. Listen below