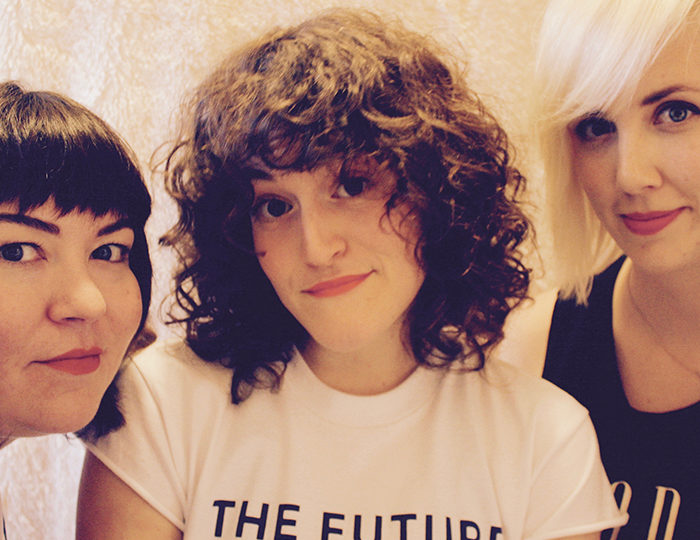 Upon arriving at Gabe’s entirely too early (8:30pm) for Younger’s performance (10pm), I started to get nervous that not many other people would show, as I was one of about a dozen people waiting around in the venue. Surely more than 13 people wanted to see Younger, a rock band trio of badass women, performs songs from their sophomore album Night Milk, right?

Luckily, I was indeed right, and just before artist Dana T. went on at a 9, the audience swelled with lots of people, crowding the upstairs of Gabe’s into a proper audience. Even more people came just in time for the start of Younger’s performance. I remained, if I had to guess, the youngest person there by several years, which was readily apparent as the other music goers all held beers and I held a cup of water (sigh). Water and all, the atmosphere was very fun and enjoyable, just as I expected it to be when listening to some women jamming out to their songs under the blinking lights at Gabe’s.

As I was reading about Iowa City-based Younger on the Mission Creek festival website, I found it funny that the band, composed of members Sarah Mannix on the drums, Amanda Crosby on the bass, and Rachel Sauter on guitar, “accidentally” wrote their first album as a sort of experiment, diving into what collaboration really means. I’m not sure how that happens in the first place, but I’m glad it did. Younger’s songs are simultaneously “feminine and tough” and tackle such topics as crappy experiences with men, frowned upon behavior, complicated relationships, and more.

What I noticed the most about Younger throughout their 35-ish minute set is their ability to maintain the initial energy established with the first song all the way to the end. Some other artists or bands may start strong, but then play a song that slows the room down, deflates the audience, and ruins the overall upbeat vibe. This was not the case with Younger – each song was lively and fast, fitting together cohesively, yet unique at the same time.

The very first song they played immediately reminded me of “Reputation” from the original Shrek soundtrack (side note: what a masterpiece that soundtrack was); awesome drums, strong female vocals and unapologetic lyrics. The audience, myself included, was compelled to jump around and bop our heads to the infectious song. I believe the second song they played was “Trash,” a crowd favorite for its funny lyrics and somewhat outrageous concept of using such an unappealing title. They later threw in a cover song, which I unsurprisingly did not recognize since they prefaced it with “this will show you old you are.”

The titles of their other songs are pretty straight forward, such as “20s,” “Art School,” and “Divorce,” highlighting the band’s upfront honesty about the topics they are exploring. Bold and energetic, Younger is yet another band to keep an eye out for as they promote their second album. Read more about them here.