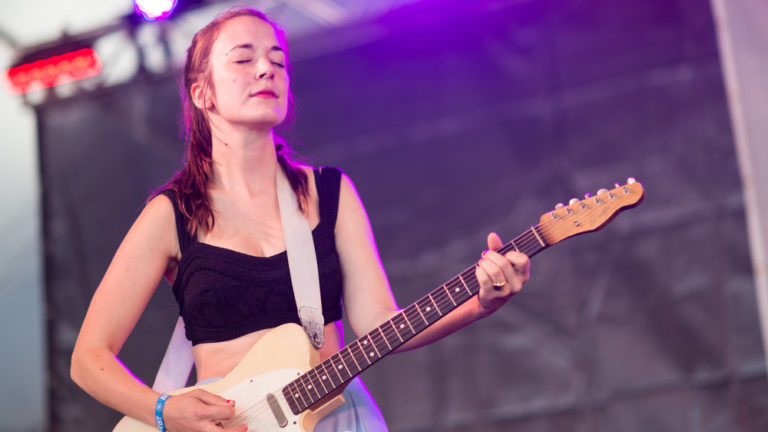 Going into this show I wasn’t too sure what to expect from the artists since they all had such diverse styles and came from different genres.

When Margaret Glaspy started her set after Sister Wife with my personal favorite song, “Emotions and Math, I knew it was going to be great.

The way that the stage was set up made everyone in the room feel relaxed. Glaspy and her current guitarist Julian Lage, were both seated in the middle of the stage with nothing but their guitars around them.

The mess of the instruments for the following band, Wye Oak, were halfway covered up, making the setting more casual and less like a huge theater.

Pair the intimate setting with Glaspy’s grungy yet meaningful lyrics and rock guitar, and everyone is in for a treat. The show lasted about an hour, but I could have easily sat there for the rest of the night listening to Glaspy effortlessly float from song to song.

I have a hard time describing what her voice sounds like exactly because there isn’t one person that I can compare her to.

Pitchfork describes her voice as a “nasally warble” but that would turn me away from her music, and I think that more people need to be turned onto it.

The singer-songwriter is a great lyricist, and in the intimate setting of the Englert, we are reminded of this. She has the sort of voice that makes you feel experiences you’ve never been through.

Though a lot of her music is relatable with not all of them being about a breakup or mushy love songs. “Somebody to Anybody” and “Before We Were Together” (which is from her new EP) are just two that come to mind.

Margaret Glaspy and Julien Lage compliment each other perfectly on their guitars, with Glaspy on electric and Lage on steel (mostly).

At one point in the show, Glaspy hands her guitar to Lage and they break into a few songs from the band they are in together called Rude Ruth.

It wasn’t the grungy simple rock that we were used to hearing from her but sounded just as good and I was glad to get a taste of more music of hers.

Like I said earlier, Glaspy has a new EP out featuring three great songs that sounded great live.

“One Heart and Two Arms” sounded off at times, but it was deliberate. After listening to it closer on Spotify, I realized that it’s subtle.

That’s another great thing about Margaret Glaspy, she puts on a great live show- from guitar playing to singing you know exactly what you are going to get, and it’s going to be good.