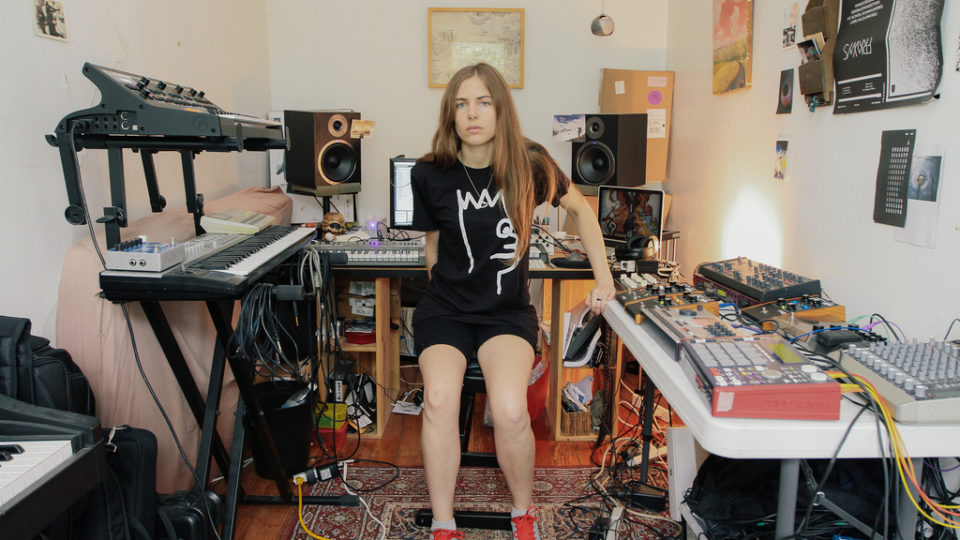 Before attending the Laurel Halo concert at the Yacht Club, I had only immersed myself into Halo’s recent album, Dust, and its polyrhythmic, distorted jumble of sound mixes partnered with Halo’s controlling, auto-tuned voice.

My number one question as I walked down into the Yacht Club’s packed, dark basement was how Halo would transfer her studio sound mixing skills to the stage?

Rather than playing individual tracks, Halo created a disorder of sounds that worked to create an atmospheric, ambient tone to the basement.  For the first ten minutes, Halo mixed together a disoriented drone sound as if she was starting the engine to a mysterious spaceship waiting for the crowd to come aboard for the ride.

The crowd walked on board, not really sure of the destination. Halo then began to mix in more sounds, foreshadowing the abundant amount of noises she had in store for the night.

But also, she took her seat in the captain’s chair and commanded the ship by projecting her voice throughout the basement.

I stood shocked at Halo’s vocals, not because of their sound, but after playing a ten-minute interlude I almost forgot she included her voice in her work.

She mixed in her vocals with the next atmospheric tone, which felt like she commanded the ship to a John Carpenter 1970’s horror film.

The noises were uncomfortable and daunting, as Halo’s auto-tuned voice closely resembled the possessed daughter in William Friedkin’s 1973 film, the Exorcist.

Halo then stopped the ship in Berlin, as she showcased her influences of the ambient mix of keys and horns that closely resemble Brian Eno’s solo work, and his efforts on David Bowie’s first album recorded in Berlin, Low.

Soon after, Halo slowly transitioned into her next blend of sounds that resembled Dust.  It started off with a continuous drum pattern, establishing the switch in tone. Then, Halo mixed in an assortment of sounds, ranging from noises of laughter, piano keys, synthesizers, and her auto-tuned vocals.

She closed her performance with the fan favorite, Dust’s “Moontalk.”  At this moment, the crowd starting bopping more back and forth, finally able to recognize a song from Halo’s unique medley of sounds.

Though soon after, the lights came on and the spaceship landed back home.  Halo took the crowd on a journey exploring new sounds, some from my perspective never before implemented into song; making Halo resemble the avant-garde.

I left the basement unsure where Halo will go next in her career.  If after creating three critically acclaimed albums with Hyperdub and collaborating with a plethora of other artists in the experimental, electronic field, she might continue tapping into the sounds of where no other artist has gone before; taking her listeners deeper into the uncharted territory of space.