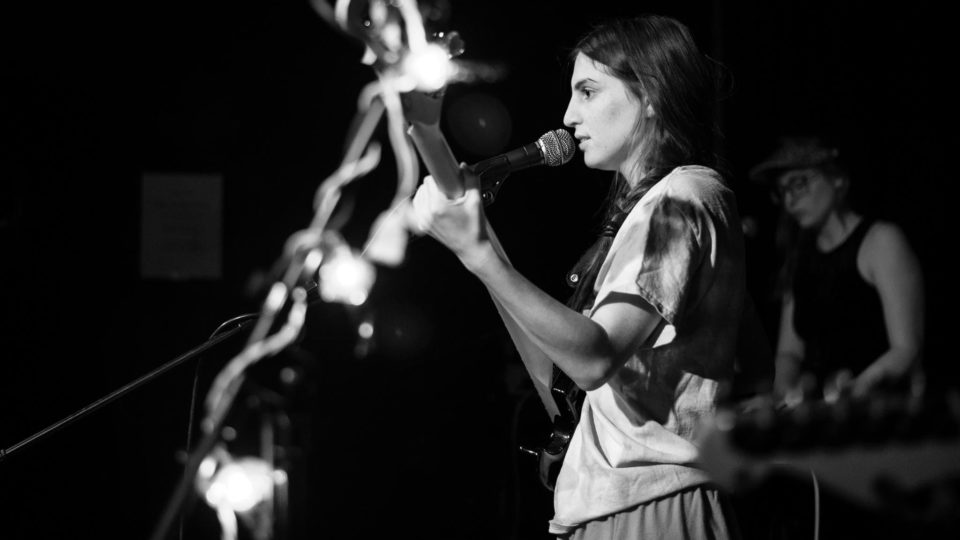 The upstairs of Gabe’s was stuffy and dimly lit save for faint strings of lights on the ceiling. The crowd hadn’t fully formed yet, as Hot Tang went on at 8:30, but for anyone in the crowd that early, they got a treat.

Three people. That’s all the band needs. Lead singer Megan Buick, who also played bass guitar, a piano and background vocals performed by Anna Kahn and a set of drums were all it took for Hot Tang to fill the room with dreamy, catchy, and infectious songs.

Reminiscent of Jenny Lewis, Beach House, and Sigur Ros, the beautiful harmonies are what carry Hot Tang throughout each song. The band has the unique ability to seamlessly weave sparse and simply catchy electronic piano and drums into something much more that ends up filling a room with people swaying their bodies back and forth.

Most songs started off slow, with soft instrumentation centered around Buick’s laid-back lead vocals until momentum was gained and the song blew up into a full-blown rollicking pop song. Buick’s vocals are undeniably unique, and the effortlessness with which she coasts across songs is impressive. Lyrically, Buick takes a less-is-more approach like artists such as James Blake, opting for simple turns of phrases that repeat and grow with the music.

One of the last songs performed on the night was “Secret Beach,” my personal favorite. The song built to a climax after Buick proclaimed, “I’m not havin’ any fun,” with a quiet backdrop until the whole band joined in and sent the song off on a high note. The dreamy soundscapes that Hot Tang creates are undeniably beautiful, and reminded me of a summertime drive in the sunshine with the windows rolled down.

The entire set performed by Hot Tang was infectious and filled with a great mixture of memorable lyrics and outstanding musicianship. Buick’s voice was fantastic live, and her laid-back delivery paired with the beauty of her voice was impressive.

The band’s latest release, titled Gone Fishin’, was released in 2017 and is available on BandCamp for $5. I’d highly recommend it for purchase, and also seeing the band live. The songs translate very well to a live setting and sound nearly identical to the studio versions.