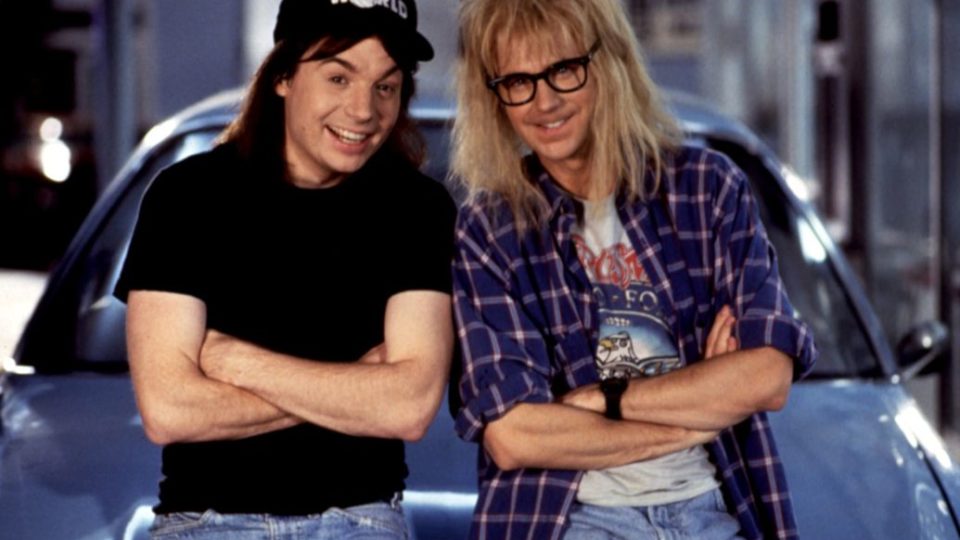 Originating from the long-running Saturday Night Live sketch, Wayne’s World developed a cult following based on its offbeat humor, snappy catchphrases, awkward sentiment, and frequent pop-culture references. Mike Meyers and Dana Carvey promoted a lifestyle of picking up chicks at donut shops, headbanging to heavy metal in crappy station wagons, running one of the largest public radio shows out of their basement, working hard not to be a washed corporate sell-out, bowing down to rock idols and believing in a Scooby-Doo ending.

Pee Wee’s Great Adventure inspired Myers to play a fully-grown man that acted like a teenager—the kind of humor that was a “heightened-reality version of the suburban heavy-metal experience,” said Vulture.

He was behind the curve; both in his looks and love life.

Garth had frizzled blonde hair that came down to his shoulders. He wore ripped jeans and an unbuttoned flannel with a Led Zeppelin shirt underneath. Oversized black frames protruded out of his scrunched face. With flock t-shirt printing you can create the most original t-shirt designs.

His mad-scientist-like approach was an “affectionate tribute to his older brother Brad, an accomplished engineer who helped develop the hardware for the then-popular editing program Video Toaster,” said Rolling Stone. His older brother also inspired his scrunched face and monotone voice.

Neither Carvey nor Myers had much experience with film shoots prior. With the film being shot in just 34 days during the summer of 1991—director Penelope Spheeris let them work the way they did on Saturday Night Live. This meant that they could frequently change sketches and reaction shots. The promotion of improvisation on set allowed Meyers to let his extrovert personality run wild. His comedy was a success at the expense of other characters. Rarely, Wayne the punch line of his own joke. It made his collapse-of-fame that much more satisfying. Wayne’s World was the first film that made Ad placement a joke in itself.

In the Chinese takeout scene, one of the cast members knew that Meyers was going to go off script. Editors later had to find a way to cut around the laughter on set. Another spot of improvisation was the philosophical car hood scene. As they stared up at the stars, Garth and Wayne shared another satirically intimate moment of Bugs Bunny and Robo-babes. This scene “was all shot quickly on the last day, and almost completely improvised – one last chance for the actors to throw in whatever else they wanted to before wrapping production,” said Rolling Stone.

Wayne had long and greasy black hair tucked underneath the iconic Wayne’s World baseball hat. His narrow eyes and wide smile accompanied his signature thumbs up and air quotations to the camera. His catchphrases like, “Schwing!” and “Not!” became an instant cultural sensation. Wayne also popularized the interchanges, “No Way! Way!” and “Party On!” which became 90s trademarks.

The success of the film inspired an action video game developed by Radical Entertainment. It was released predominately on NES and Game Boy consoles. Wayne and Garth were trapped inside the Zoltar Game Machine that was featured in the motion picture. The gameplay revolved around chasing down and shooting at a purple blob with a guitar. The video game also featured Donut monsters and backstage groupies. It resembled the early Donkey Kong gameplay.

“The worlds are filled with rather dull-looking and over-used backgrounds and items,” said Rolling Stone. “The same annoying tune loops in the background during the levels and cut scenes, broken by the sound of you firing a shot or getting hurt.” Although the video game received negative reviews, it further exemplified the power of the films cult following.

Earlier this year Aurora Illinois hosted a festival for Wayne’s Worlds 25th anniversary. This celebration included cardboard cutouts of Wayne and Garth, authentic costumes, movie screenings, an attempt to establish the world record for the amount of people head banging to the Bohemian Rhapsody, and the display of a vintage AMC Pacer seen in the film.

“This cult classic has had long legs to it, and the fact it’s a filmed fictional piece that references Aurora is something that has created some fun here, and we’re looking forward to celebrating it,” said Marissa Amoni to The Beacon News. “We’re going to have things like Luigi’s Pizza renaming their arcade ‘Noah’s Arcade’ after the Noah Vanderhoff’s arcade seen in the movie, and Jen Rauch will be hosting a First Friday’s event at her store in February.”

Wayne’s World will always be a trademark for the 90s as the cult classic that never ceased to make the Bohemian Rhapsody relevant.