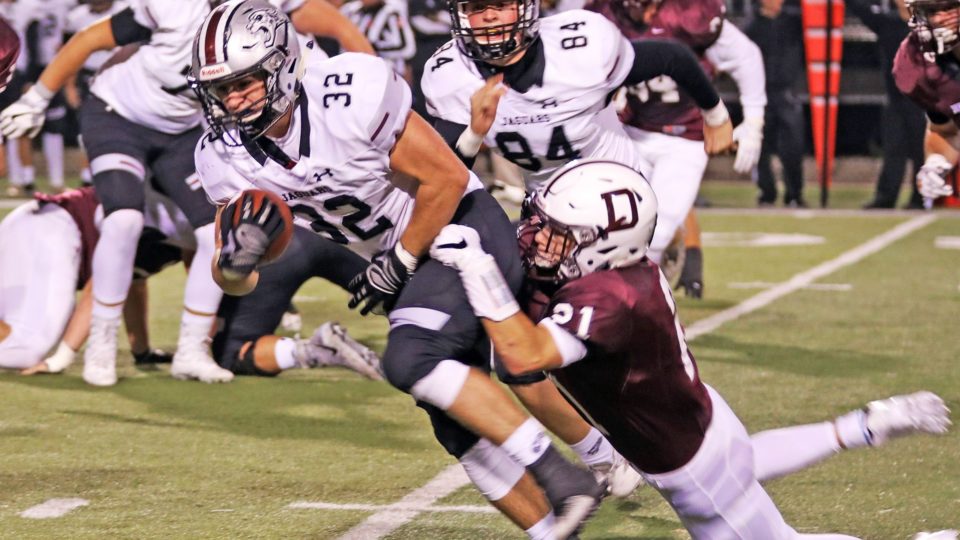 Defending 8-man state champion Don Bosco, Gilbertsville is back in the playoffs again, flaunting a perfect 9-0 record led by senior quarterback Wyatt Swavel.  Swavel has been a dual threat machine for the Dons, passing for 966 yards and 19 touchdowns and rushing for 781 yards and 16 touchdowns. The Dons will have more competition this year as on the other side of the state, the Audubon Wheelers are putting up dazzling numbers offensively. The Wheelers have a dual-threat quarterback of their own in senior Tyler Riebhoff. He has passed for 806 yards and 14 touchdowns and rushed for 1,015 yards and 24 touchdowns as the director of the explosive Wheeler attack. These two teams appear to be on a collision course to meet in the UNI Dome come championship week.

It’s the usual suspects once again in the Class A playoffs as the field of teams is led by Council Bluffs, St. Albert, Wapsie Valley, Fairbank, Gladbrook-Reinbeck, and Algona, Bishop Garrigan. Many believe that the Falcons of St. Albert are the favorites to take the Class A crown behind the dynamic duo of quarterback Kyle Barnes and running back Luke Waters. Barnes has passed for 1,238 yards and 20 touchdowns this season, and Waters has rushed for 422 yards and 11 touchdowns on the year. Another team expecting to be right with the Falcons are the Warriors of Wapsie Valley. The Warriors are led by the senior running back duo of Colin Schrader and Jake Kuhlman, who have combined for 1,492 yards and 17 touchdowns. Wapsie Valley will be tested right off the bat, taking on defending state-champion Gladbrook-Reinbeck in the first round. A third team to look for are the West Sioux Falcons, who are led by another dynamic duo of sophomore quarterback Hunter Dekkers and senior running back Jake Lynott. Dekkers has passed for 1,404 yards and 23 touchdowns while Lynott has rushed for 1,848 yards and 25 touchdowns, and leads all of Class A in rushing yards.

For the first time in a long while, Class 1A seems to be up for grabs this year. The 1A field is led by the undefeated teams of West Lyon, Inwood, Van Meter, Pella Christian and West Branch. Iowa City, Regina will also be up with the best with their two losses to 3A foes Cedar Rapids, Xavier and Solon. Regina will be led by senior running back Isaac Vollstedt, who has accumulated 773 yards rushing and 13 touchdowns on the year and 276 yards receiving and two receiving touchdowns. The other team to look for in Class 1A is the Van Meter Bulldogs, who are led by a deadly backfield duo of quarterback Blake Fryar and running back Carson Rhodes. Fryar has passed for 1,228 yards and 20 touchdowns and Rhodes has rushed for 1,498 yards and 17 touchdowns in leading the Bulldogs to a 9-0 record. A third team to look out for in 1A is the Bears from West Branch, led by quarterback Beau Cornwell who has passed 1,970 yards and 20 touchdowns. Cornwell’s play has been a big reason in why the Bears were able to claim another district championship this season with a 9-0 record.

Boyden-Hull/Rock Valley will once again be the team to beat in Class 2A as they defend their state championship from a year ago. The Comets will be led by dual-threat quarterback J.T.  Van’t Hul, as he has passed for 1,396 yards and 18 touchdowns and rushed for 839 yards and 16 touchdowns, leading BHRV to another district title. The biggest challenge to the Comets reign comes from the Mustangs of Mount Vernon. The Mustangs are led by senior quarterback Drew Adams, the state of Iowa’s all-time leader in total offense. Adams has passed for 1,807 yards and 29 touchdowns en route to leading Mount Vernon to an 8-1 record. A third team to keep an eye on will be the Cascade Cougars, the only 2A team with an undefeated record. The Cougars are led by junior quarterback Harris Hoffman, who has passed for 1,486 yards and 17 touchdowns leading the Cougars to a district championship.

The most parity in Iowa high school football may lie within Class 3A. Four teams enter the playoffs undefeated: Dallas Center-Grimes, Solon, Seargent Bluff-Luton, and Cedar Rapids, Xavier. The field also includes a first-round rematch of last years state championship game between Pella and Webster City. The favorite for most will be the Mustangs of DCG, led by senior running back Tanner Epple, who has rushed for 918 yards and 12 touchdowns along with 252 yards receiving and a touchdown. The east side of the bracket will be a showdown between Solon Spartans and Cedar Rapids, Xavier Saints. The Spartans are carried by sophomore quarterback Cam Miller, who has passed for 1,446 yards and 21 touchdowns to lead Solon to another district championship. Xavier’s team is carried by the three-headed rushing attack of Brady Stovie, Quinn Schulte and Jax Junge. The three have combined for 1,491 yards rushing and 18 touchdowns. The 3A playoffs will be nothing short of exciting.

Another year, another bracket where Dowling Catholic is expected to win it all. The Maroons are going for their fifth consecutive state title and have plenty of firepower to do so. Led by the three-headed monster of quarterback Blake Clark, running back Jayson Murray and receiver Sam Ignoli, the Maroon offense leads 4A with 4,663 yards of total offense and show no signs of slowing down. Another team to watch is the Ankeny Centennial Jaguars, who handed Dowling their lone loss during the regular season. The return of quarterback Chance Gibbons from injury will be a big help for the Jags along with their deep stable of running backs who have amassed 2,373 rushing yards during the regular season. On the east side of the bracket Iowa City West looks to make a return trip to the state championship following their loss to Dowling in the final a year ago. The Trojan attack is carried out by senior quarterback Evan Flitz, who has passed for 2,157 yards and 24 touchdowns in West’s undefeated regular season. This year may show the best chance for a team in 4A to interrupt the Dowling dynasty.