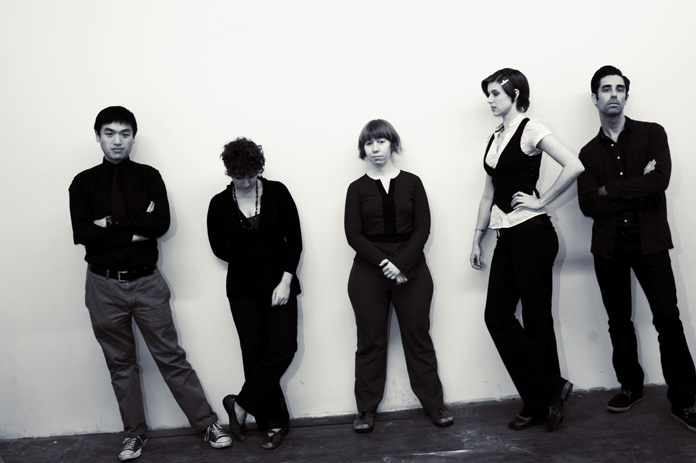 Today, FilmScene, Iowa City’s year-round resource for awesome films, kicked off the Witching Hour festival with a screening of Adam’s Run–a video opera produced by the group Rhymes with Opera, followed by a Q and A with the director and two actors.

Rhymes with Opera is a New York-based group consisting of three opera singers and two composers. Through smaller, more intimate performance settings and innovative experimentation, they bring opera as an art form to a new level.

I had no idea what to expect from this screening, other than the fact that it involved opera. Since I tend to space out during ordinary movies, I had grave doubts about my ability to stay awake in something that involved opera, the ultimate boring experience, according to some.

Adam’s Run actually made opera an enjoyable experience. It’s a dystopian comedy and tragedy, set in around 2020, an unnervingly imminent time frame. After a trippy title sequence of neon laser beams and television static, the film opens with a television producer narrating the fatal

feud between a nihilistic weathercaster and overly religious televangelist amidst an apocalypse.

In “The Existentialist Weatherwoman,” a meteorologist, with a perpetual smirk on her face and martini in her hand, apathetically comments on how the mid and southwest are still burning up and the east coast is being drowned in torrential rains. Casually sitting up on the upper right corner of the screen is a countdown to the end of the world.

Meanwhile, an environmental televangelist urges viewers to repent of their sins and help him build giant ark, in anticipation of another great flood.

Naturally, these two personalities butt heads over their slightly different attitudes about the apocalypse. But once they meet at the ark construction site at Adam’s Run, their plans and feelings go awry.

Apart from the engaging plot, the structure of Adam’s Run itself is fascinating. The entire film consists of “footage” from television shows, cameras left on, and the narrator’s own show– “400 Hours from the End, with Dana Daring.”

Thus everything we see is literally through some lens: at one point in the film, the first encounter between the meteorologist and the minister is filmed through two cameras, one from each of their shows.

Each camera presents a different visual perspective of the situation, particularly through color. The evangelist’s camera casts a dismal blue hue, while the meteorologist’s has a more flippantly orange cast.

I thought that these simultaneously portrayed perspectives spoke to the pliability of the worlds presented to us through various media–an issue especially pertinent in our day.

Of course, Adam’s Run is still entirely an opera–except for one part, which resembled a grunge music video. Though it is very much NOT your average movie in this sense, the dystopian plot, the nifty editing, the shifts in perspective and commentaries on our relationship with television and the weather, all combine to make you forget that this is an opera.

Even more impressive, during the Q and A session, the director mentioned that they completed this movie within a few months, and the filming within a few days.

This clash between old and modern art forms redefines two different art forms, and brings a new (and fresh) twist on the dystopian narrative.

This was just the first of several events showing how art is being pushed beyond its limits; check out what else is happening in Witching Hour here.