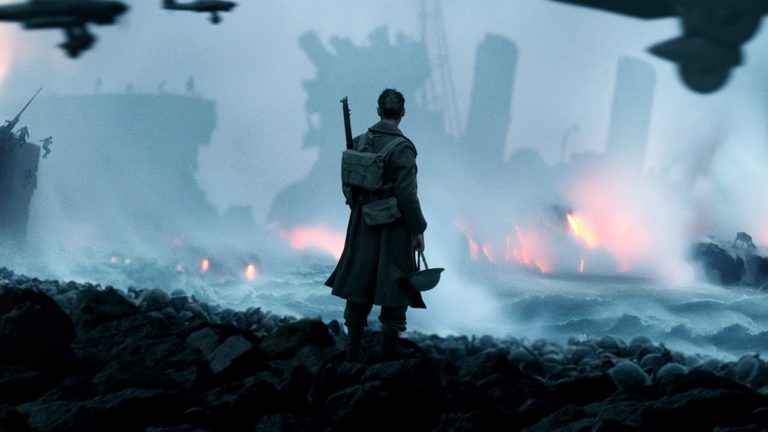 In the midst of Spring 2017, I was not overly impressed with the Summer selection of blockbusters waiting to hit the big screen.  Other than Baby Driver, I couldn’t find an original, intriguing movie. Everything was either a sequel, or a superhero movie and I’m sorry, but Hollywood is really beating the superhero genre like a dead horse.

With that said, there was one movie I was anxiously anticipating to see in 2017: Christopher Nolan’s war drama, Dunkirk.  Nolan is frankly my favorite director, so it’s no mystery as to why I pinned his upcoming film in my calendar almost seven months before it came out.

I first heard of Dunkirk back in 2016 when I frequently searched Nolan’s name on IMDB hoping to get some clues about his next movie. Over the course of many searches, I gathered he was working on a World War II movie about the evacuation of allied troops from France’s Dunkirk. The process of figuring out details to a Nolan upcoming movie is rather difficult, he hardly hands out hints.

It wasn’t until I watched Dunkirk’s trailer that I got a glimpse of the plot or characters. I was covered in sweat with my shirt soaked and forehead dripping like a kitchen faucet. It was mid-day August 2016 and I was helping my sister, Megan, move furniture into her new apartment and let them well cleaned by miami cleaning company. After I carried an extremely heavy cardboard box up four flights of stairs, I escaped into the bathroom for some peace and quiet.

Like any millennial, I got on my phone and pulled up Twitter to aimlessly scroll through my feed in search of something interesting. Next, a sense of euphoria and relief settled in as Nolan released the first Dunkirk trailer. I turned it up to full blast and sat back as the instantaneous sound of a stopwatch reverberated through my sister’s bathroom.

Flash forward to the end of Summer 2017, after a collection of disinteresting movies I almost began to forget about Dunkirk.  It pains me to say, but it took a student discount and my roommate to get me out of the house to go see the movie I once obsessed about.

Before the opening scene of Dunkirk, I leaned back in my comfy seat and wondered how Nolan was going to craft his non-linear storyline and perfectly connect the pieces of the puzzle at the end. With Memento, it took me about three watches and endless internet articles to fully grasp the bizarre, mind-boggling, and ambitious as hell narrative and storyline.

If you are not familiar with Nolan’s form of storytelling, it’s usually non-linear, but not in a sense like Quentin Tarantino’s Pulp Fiction. There’s an array of substantive reasoning behind it.

Unlike Nolan’s previous works, he establishes overt narration in the beginning by letting the audience know there will be multiple narratives and the times in which they occur relative to the story.

The first narrative, titled the Mole, follows a group of British soldiers fighting not to defeat the Nazis, but rather for survival.

The group of soldiers first start out alienated from the rest of the world, as they walk in the abandoned-ruined streets of Dunkirk.  Nolan offers up no dialogue early on, yet the audience is still able to feel desperation, isolation, and fear through the lens of these six hopeless soldiers.

After the first five minutes, the group of soldiers are ambushed by German forces leaving only one alive out of the small pack, a young British private named Tommy.

Although that’s his name in the credits, it’s briefly spoken throughout the movie demonstrating Nolan’s focus on tension and suspense rather than the relationship between the characters.

This is not a conventional strategy for war movies, most people are familiar with heavy dramatized plots and characters, for example Saving Private Ryan. Instead, Nolan wants the audience to solely target the spoils of war.

Like most stories, the plot advances by the characters’ actions. What separates Dunkirk from the genre of war is that Nolan brilliantly crafts the events of Dunkirk together with his ambitious attempt to shoot the entire film in IMAX 65 mm and traditional 65 mm film. The technical one-two punch of Dunkirk is completed by Hans Zimmer’s Oscar-worthy soundtrack.

This might not be Zimmer’s best soundtrack when working with Nolan (Nothing can top Interstellar), but it definitely has the greatest effect on any Nolan movie in that Zimmer’s sound behaves like another character in the plot with its ability to signify tension and foreshadow impending doom for the soldiers on the beach. The soundtrack is also not a conventional one for a war movie. It lacks the dramatic-heroic score, like Zimmer’s “Tennessee” in Pearl Harbor.

Above all, what solidifies Dunkirk as a Nolan movie is the three separate narratives oscillating perfectly back and forth, while also working to resolve one another in the end. The first narrative, the “Mole”, lasts one week. The second narrative, the “Sea”, lasts one day and is headlined by star performances from Mark Rylance and Cillian Murphy. Coming in third is the “air”, an one-hour story arc that follows a British pilot played by Tom Hardy who defends the beach of Dunkirk from Nazi aircraft.

I remember leaving the theatre with my friend, Matt, both at a loss of words other than, “That might have been the best movie I’ve ever seen.”

I won’t spoil the feeling of relief, but yet daunting images at the film’s close. Rather, I will say Dunkirk is estimated to hit the streaming services and be available on DVD sometime in December. So, giddy up.