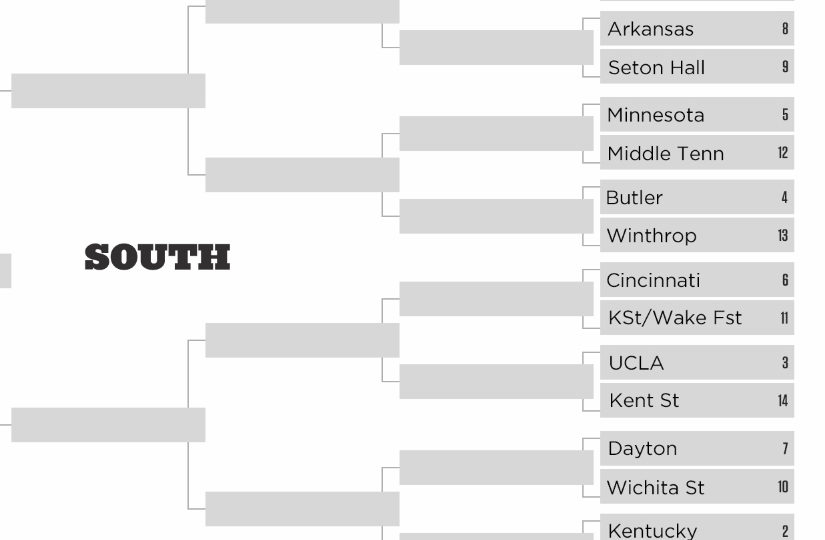 This is the final piece of our NCAA tournament breakdown, and I believe we saved the best for last. The top four seeds of the south regional have more collective talent than in any other regional, which should make for some very entertaining basketball. Let’s get to it.

North Carolina- The Tar Heels are about as talented of a seven loss team as you’re going to find, and they are more than deserving of a #1 seed after winning the brutally competitive ACC regular season title. North Carolina accumulated ten wins this season against NCAA tournament opponents, and that didn’t happen by accident. The Tar Heels score a ridiculous 85 ppg by possessing multiple scoring options, with four players scoring over 12 points a contest. The defending national runner up has more experience than anyone else in the tournament, as all four of their double digit scorers are juniors or seniors. Led by 6’8 junior forward Justin Jackson, the Tar Heels have a relentless inside out offensive attack as they shoot over 36 percent as a team from three and they get to the free throw line over twenty two times a game. Another major advantage that the Tar Heels have is size and depth. Even though only one player on the team averages more 5.7 rebounds a game, they lead the nation in rebounding. North Carolina is a very well rounded team with no obvious holes, which makes them a very tough team to beat in this tournament.

Kentucky- Despite the Wildcats list of household recruits and numerous nationally televised prime time games, this Kentucky team seems to have less fan fair then they have in previous seasons. Some of that has to do with Calipari bringing in new faces every year before fans can become fully acquainted with the “older” ones, but I think it’s mostly because the SEC is generally the worst of the power five conferences and they struggle to draw the eyeballs of casual fans. Regardless of popularity this Kentucky team is, for lack of a better word, awesome. Just like North Carolina, they average over 85 ppg, they dominate the boards average about 40 rpg, and they have four players that average over 12 ppg. The biggest difference is North Carolina’s big guns are juniors and seniors with final four experience, Kentucky’s are freshman and sophomores with one foot already out the door awaiting the NBA. Calipari has taken a young group to the promise land before, and he has a chance to do it again this season.

UCLA- The Bruins are the most dangerous three seed in this entire tournament.  I talked about how explosive North Carolina and Kentucky are offensively, neither of them are quite as explosive as UCLA who leads the country at 90.4 ppg. The Bruins do it by sharing the basketball, as they also lead the country in assists and have six different players in double digits. Led by polarizing freshman phenom point guard Lonzo Ball, the Bruins have a nice mix of youth and experience that help them win 29 games this season. The Bruins don’t defend or rebound as well as UNC or Kentucky, so they will have to rely heavily on Lonzo Ball’s guidance of the offense if they want to advance to Phoenix.

Wichita State- The Shockers lost four year legends Fred Van Fleet and Rod Baker to graduation  this season, but they were still able to rattle off a 30 win season and both the regular season and conference tournament title in the Missouri Valley. However, despite being ranked in the top 20 in most polls they only received a #10 seed. The main reason they were seeded so low was they lack a good out of conference win while coming from a one bid league, but also they don’t have a notable, proven playmaker that convinced the committee that they can win big games. Despite their deficiencies on paper, the Shockers proved they can win on the court with a combined team effort. Nobody on the roster averages more than 11.8 ppg or 26.2 minutes, but they still averaged over 82 points a game while finishing 14th in the nation in total defense and fifth in the nation in rebounding. It will be a tall task for the Shockers to win more than one game in the tournament given their draw, but match ups won’t stop them from putting their best foot forward.

Cincinnati-  Mick Cronin and the Bearcats had an excellent 29-5 season out of the American Athletic Conference, and they were rewarded by the committee with a #6 seed. The Bearcats play absolutely swarming defense, as they finished 4th in the nation in defense. However, they failed to score 70 points on 13 different occasions this season. What is even more shocking to me than that stat is they are 30th in the country in assists but only 127th in the country in scoring. That stat tells me that Cincinnati doesn’t have nearly enough playmaking ability, which will probably cost them in the first round against a Kansas State team that just scored 95 points against Wake Forest.

Middle Tennessee State- The Blue Raiders of Middle Tennessee State come in as the pick to click among #12 seeds this year after winning 30 games, including a blowout over Vanderbilt and nearly beating VCU. Their draw against the over seeded Minnesota Gophers is the most favorable draw of any #12 seed, and their top 3 players combine for 47.6 points a contest. MTSU vs Minnesota just screams 12 over 5 upset.

FR PF TJ Leaf, UCLA- At just 19 years old, Leaf is already better than either of his older brothers ever were at UCLA. He’s ranked by ESPN’s Chad Ford as the 12th best NBA prospect in the world and he leads the highest scoring team in the nation in points per game. He’s extremely efficient, shooting 61 percent from the field and 45 percent from three. His consistency and efficiency are essential to UCLA’s success.

JR PG Joel Berry II, North Carolina- The biggest piece missing from North Carolina’s runner up finish from last season is point guard. In his first full season as the Tar Heels primary floor general, Berry has played very well averaging 14.8 ppg and shooting 42 percent from three. However, his assist to turnover ratio is slightly worse than 2-1. He will need to cut down the turnovers for UNC to be at their best.

FR PG De’Aaron Fox, Kentucky- Fox is just one of those athletes where statistics just don’t tell the whole story, you just need to see him play multiple times before truly grasping how special he is. While his game might not transfer well to the NBA because of his inability to shoot from the perimeter, he can be just as effective on any given night on the college level as potential opponent Lonzo Ball.

FR SG Malik Monk, Kentucky- Fox’s backcourt mate is the arguably the most dominant scorer in the country. He scores over 20 a game and shoots it over 40 percent from every spot on the floor. His 47 points in a December win against North Carolina was the most impressive individual performance in college basketball this season, and there is no reason he can’t put up performances like that in the biggest games of this tournament.

JR F Kelan Martin, Butler- The powerful forward leads the #4 seeded Butler in scoring at 16 a game, and he was the driving force a team that finished runner up in the deep Big East conference. This might be Butler’s best team in the post Brad Stevens era, but it is up to Martin to lead the Bulldogs against the regional’s top dogs.

While I believe double digit seeded Wichita State, Kansas State, and Middle Tennessee State will pick up first round upsets, this is probably the one bracket where the top #4 seeds all advance to the sweet 16. The top four in this regional are just too darn good. While Butler handed #1 ranked Villanova two of their three losses, the Wildcats style of play is more comparable to Butler than North Carolina’s. The Tar Heels have too many athletes, they should be able to handle Butler without too much trouble. The UCLA vs Kentucky rematch will as fun as any game in the tournament, but I don’t think Lonzo Ball and company will be able to just outgun Kentucky. Kentucky is harder to defend now then they were in December, when they still put up 92 in a loss. Kentucky will get revenge in this matchup (sorry Lavar).

That leaves us with an elite eight rematch of a game that Kentucky won by a score of 103-100. While North Carolina is talented and has much more experience, the young Wildcats are very battle tested after playing out of conference games against North Carolina, UCLA, and Kansas. If there is a freshman duo capable of taking the down the ACC champion, it’s Fox and Monk. The Wildcats will be going back to their third final four in four years.