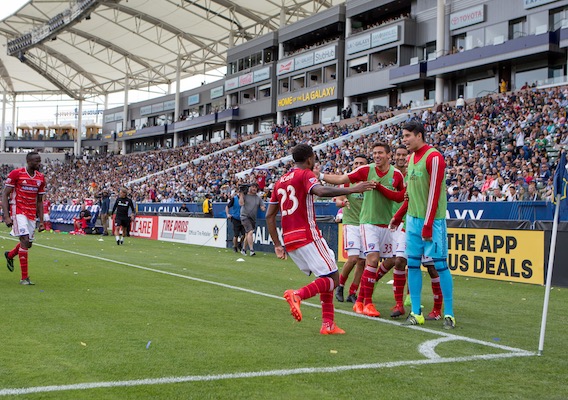 (Disclaimer): Opinions expressed are my own. For full coverage of Major League Soccer, visit mlssoccer.com

The old adage is that setting a good first impression is important, and while first impressions don’t say everything, they left food for thought in Major League Soccer this weekend. Here’s what we witnessed on national television during the opening weekend in America’s top-flight soccer league.

The Season Kicked Off With a Bang (Portland Timbers 5, Minnesota United 1)

Minnesota United kicked off its MLS existence by traveling to Providence Park in Portland, Oregon; a venue deemed the best in the league by FourFourTwo in 2015. “The Loons” made it just fourteen minutes of keeping the Portland Timbers off the score sheet, before Lawrence Olum got just enough contact of the ball off his foot to score via a free kick. It was the first goal of the 2017 MLS season. The Timbers had to wait until the second half to double the lead, but once that time came by, Diego Valeri made it 2-0 just one minute into the second frame. Christian Ramirez scored Minnesota’s first MLS goal in the 79th minute, collecting a pass and placing a shot low in the right corner from the edge of the penalty area. However, the rout got started after Fanendo Adi was taken down in the box by Minnesota defender Vedem Demidov to earn a penalty kick. Valeri’s penalty kick was just out of the goalkeeper’s reach, making it 3-1 late in the match. Adding insurance, Darlington Nagbe led a counter attack in the first minute of stoppage time after a loose ball was miss-controlled by Minnesota. Nagbe found Adi wide open in front of goal, who decked the goalkeeper, fooled an onrushing defender by delaying his shot, and finally shooting into an empty path for an impressive goal. But 4-1 wasn’t good enough as Adi decked a defender two minutes later, dashed toward goal, and scored two minutes after the previous goal to cap off a 5-1 win.

Minnesota hosts Atlanta, the other expansion squad, in its next game, while Portland will play at the LA Galaxy next.

Atlanta United played its first MLS game in front of a passionate 55,000 fans at Bobby Dodd Stadium. Unfortunately for the hosts, they gave up two unanswered goals in six minutes and were reduced to ten men in the eighty-eighth minute after Carlos Carmona was shown a red card.

But boy was the crowd electric when Atlanta scored the game’s first goal.

In the 25th minute, Tyrone Mears whipped in a cross that drifted over the center of the box and found Yamil Asad, who drove a low shot to the left post that the keeper was just late to get to.

The lead lasted for quite a while, but things went south starting in the76th-minute. Daniel Royer headed in a corner kick to tie the game. In the 82nd minute, Mike Grella delivered a cheeky pass to Kemar Lawrence, who sent a low-cross to Bradley Wright-Phillips. Defender Anton Walkes got his foot to the ball, but put it in his own net, giving the Red Bulls the 2-1 lead. In the 88th minute, tensions boiled as Felipe was fouled and went down. Midfielder Carlos Carmona intentionally stepped on him in frustration, leading to the red card.

The New York Red Bulls held on to win 2-1 and will host Colorado on Saturday.

Orlando City FC won a nerve-racking contest in their first game at their new soccer specific stadium. The city’s passion for soccer was on display at Orlando City Stadium, filling into what I think will be one of the toughest places to play on the road.

The game started with a scary sight for the team known as “The Lions”. Star player Kaká strained his left hamstring in the 11th minute. This was an injury that team coach Jason Kreis later deemed as potentially serious.

But Orlando got their goal in the 15th minute, and it was only fitting that team headliner and Canadian-international Cyle Larin scored their first goal in the new stadium. Larin got free at the far post to head home a Giles Barnes cross and send the crowd to pandemonium.

The home-team’s defense had work to do, and was sometimes bailed out by goalkeeper Joe Bendik. But despite facing seven shots on goal and only putting up one themselves, it was a day of purple reign in Orlando with a 1-0 win.

Orlando City Stadium also has forty-nine rainbow-colored seats inside its stadium dedicated to the victims of the Pulse Nightclub shooting last summer. Each seat memorializes a victim of the shooting. Each seat also has a stamp with a heart and text reading #OrlandoUnited. The team installed the seats in Section 12 due to the pertinence of the fact that the incident occurred on June 12th.