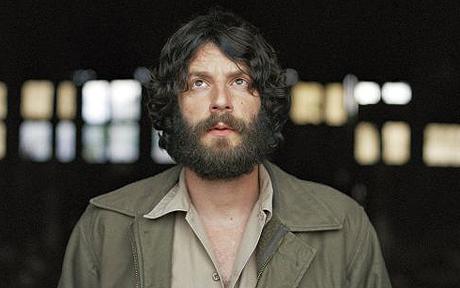 Are you looking for something spicy to complement your Fetty Wap playlist?

Well, this probably isn’t the album for you. But if you are looking for some laid back, structurally sound tunes for a peaceful night in, you’re reading the right album review.

Ouroboros is Ray LaMontagne‘s sixth album, and was released on March 4, 2016. Ouroboros is the follow-up to Supernova, which was released in 2014. LaMontagne’s new album combines his usual breathy tones and gentle, yet driving, beats. It’s the same-old, same-old for LaMontagne, with a bit of electronic play, but Ouroboros is still good.

It should be noted at this point that the term “breathy” will most likely be used often in the following article. After all, Ray LaMontagne is one breathy dude.

The record is divided into “Part 1” and “Part 2,” which were intended to be played as two cohesive pieces. LaMontagne wanted Ouroboros to operate like a vinyl record– one half fully played, and then flipped over to the second half. Both parts hold the easy-going vibes that any Ray LaMontagne listener is used to.

The record opens up with, “Homecoming,” a first glimpse back into the super breathy voice and soothing rhythms that define Ray LaMontagne. First things first, this track is LONG. We’re talking eight and a half minutes long, the length of two, if not three, full songs long. This song could be described as a whimsical, spiritual journey through springtime. A LONG, spiritual journey. (But a fulfilling one.)

The second track of Ouroboros is “Hey, No Pressure,” which was originally released as a single. LaMontagne’s rock undertones are more visible here than in the first track– we get some super smooth electric guitar and bass thrown into the mix. ‘Ol Ray’s usual breathiness is transformed into an edgier breathing gap between each word, which adds some nice variation to the record thus far.

“The Changing Man” is the third track of the record and opens up with some really sick guitar, which carries through the majority of the song. There aren’t many vocals here, but this adds to the mystery of the track and of Part 1 in general.

“While It Still Beats” closes out Part 1 of Ouroboros and feels slightly more intense than the previous tracks. Rest assured, there is still some super breathy stuff in here, but LaMontagne also adds a deeper undertone. This intensity fades into nothingness towards the end of the song, bringing Part 1 to an almost angelic close.

Part 2 of Ouroboros opens up with “In My Own Way.” This one is also a doozy in terms of length, closing out at around six and a half minutes. The track as a whole is pretty laid-back and easygoing, with a few instances of some grimy electric guitar. The gentle guitar line carries through, and since it is combined with LaMontagne’s simple vocals this track is soothing to listen to. Apologies in advance, but this could be LaMontagne’s most breathy track yet.

The second track of Part 2 is entitled “Another Day.” This track will make you want to spin dramatically in an open field. The opening lyrics are Spring is here / Spring is past / The sounds of summer settle in / The snake slips through the grass. “Another Day” comes off light-hearted and easy to listen to.

“A Murmuration of Starlings” comes up next and kicks off with some really neat guitar work. In fact, this track is almost entirely guitar work. It’s a non-vocal, with some tasteful drums and synth thrown into the mix. As a cohesive part of Ouroboros it blends well, and flows almost like an intro into the next track.

Ouroboros comes to a close with “Wouldn’t It Make a Lovely Photograph,” potentially the best track on the record. This is the summation of all previous elements: Ray at his most breathy, smooth guitar, and gentle, yet driving drums. This is the best possible track to end an album of cohesion and harmony.

Ouroboros is reminiscent in the sense that it draws inspiration from vinyl record culture, and yet there is more reminiscence somewhere in this album. It’s almost indescribable, but this record feels like LaMontagne is calling to older roots.

So, what have we learned here? Ray LaMontagne is one super breathy dude. His signature vocals cannot be matched. In combination with his easy-going guitar work and gentle beats, LaMontagne’s voice has made a cohesive, beautifully simple record that will withstand the tests of time.

Check out your old pal, Ray, on Facebook and SoundCloud.