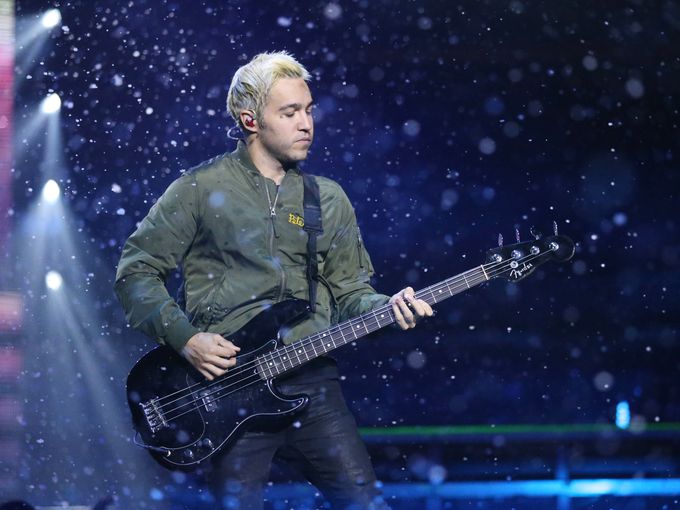 WARNING: Fall Out Boy is my favorite band so this will be a tad biased. Enjoy!

The year is 2007. I’m sitting in the back of my dad’s truck gluing on fake nails that were painted black with silver skulls on them, making my sister put my hair up in a pony tail for me. We arrived at the arena in Denver, Colorado, where we were seeing Fall Out Boy, a band I have heard on the radio a couple of times. This was my first concert ever, and I had no idea what to expect.

The year is now 2016. Fall Out Boy have reigned my number one favorite band for 9 years now, and this is the fourth time that I’m seeing them live. My sister, Amanda, and I arrived at the Wells Fargo Arena in Des Moines, Iowa, and this time I knew all too well what to expect.

Thousands of people gathered to welcome Fall Out Boy to our beautiful state, their first time being here since 2007. All sorts of people were here: parents who brought their children to see their favorite band, punk angsty teens with half shaved heads and pink hair, girls dressed up in sundresses, and hardcore fans decked out head to toe in Fall Out Boy gear. Fall Out Boy used to have a certain niche, but now that their music is getting more radio play, more and more diversity is added in to the FOB family.

Amanda and I found our seats high up in the nosebleeds of the arena. I wasn’t particularly thrilled about being so far away from the stage, considering I’m the type of fan that loves to crowd surf, mosh, and stand in with the crowd. These nosebleeds consisted of the people who weren’t really big fans of any of the bands, but were just there because it was either something to do, they were with someone who wanted to go, or they are a broke college kid (aka me). We settled in our seats after buying some merch and a slice of pizza. The stage wasn’t too far, and we could hear the bands just fine.

The first band to come out is a band named PVRIS (pronounced “Paris”), an up and coming electro-pop/post-hardcore band from Massachusetts. I’ve seen PVRIS before when they opened for Mayday Parade in 2014 and again at Warped Tour in 2015.

Every time I’ve seen PVRIS live (and this time was no exception) their vibe has been so exuberant. Their frontwoman Lynn Gunn is known for her remarkable vocal chords that can hit some deep, forceful tones as well as a softer side. All band members stand out, but Lynn Gunn keeps the crowds energy up by talking between songs and getting the crowd to interact with them. PVRIS fuels the crowd with adrenaline, keeping them pumped up for the bands to come. Their all too short 6 song setlist consisted of their biggest hits off their album White Noise: White Noise, St. Patrick, Smoke, Fire, You and I, and My House.

Up next was Awolnation. Now, to be completely honest, I’m not really a fan of Awolnation, an alternative dance/indie rock band. I found a set list of this concert beforehand and listened to the stuff I knew they were gonna play, and I was not looking forward to it. When the lights dimmed and fans started screaming, I sighed and sat back in my seat, planning on just waiting it out.

I wasn’t blown away by their performance. But, I’m a sucker for live music. While I probably won’t listen to their music on my own time, I was enjoying myself. The lead singer, Aaron Bruno, sent a lively energy through the arena that echoed throughout. He appeared to be barefoot (I could be wrong considering how far up we sat) and danced all around the stage. He danced like no one was watching, and sang his soul out. Their entire set had a very spiritual vibe and it was easy to listen to. For their set, it was easy to forget all of my problems and just simply enjoy music. Their 9 song set list included Run, Hollow Moon (Bad Wolf), Not Your Fault, Windows, Kill Your Heroes, Woman Woman, I Am, Burn It Down, and their most famous tune, Sail.

Finally, it was the moment we were all waiting for. The trumpets from the intro of “Irresistible” echoed throughout the arena, and Patrick, Pete, Joe, and Andy all took positions on stage. Fans all across the arena (including myself) belted the lyrics back to them as each of them ran around on stage and onto the v-shaped catwalk extending into the crowd. They then threw it back to “Sugar, We’re Going Down”, a hit off of their 2005 record From Under The Cork Tree. Out of the 4 FOB concerts I’ve been to, they always know how to shake up their setlist and incorporate new and old songs. Their 22 song set list contains 8 songs from their 6th studio album American Beauty/American Psycho (Irresistible, The Kids Aren’t Alright, Novocaine, Fourth of July, Uma Thurman, American Beauty/American Psycho, Jet Pack Blues, and Centuries), 4 off of their 3rd studio album Infinity On High (Hum Hallelujah, “The Take Over, The Breaks Over”, This Ain’t A Scene It’s An Arms Race, Thnks fr th Mmrs), 4 from their 5th studio album Save Rock and Roll (The Phoenix, Alone Together, Save Rock and Rolle, My Songs Know What You Did In The Dark), 2 off of their studio album Folie a Deux (Disloyal Order of Water Buffalos, I Don’t Care), 2 off of their 2nd studio album From Under The Cork Tree (Sugar We’re Going Down, Dance Dance) and 2 off of their first full length album Take This To Your Grave (Grand Theft Autumn/Where Is Your Boy, Saturday).

Throughout the show, the guys all moved around onstage, tossed their pics into the crowd, and rocked out. They always throw epic concerts, and this one contained a lot of blue and white confetti, beach balls, and fire.

They slowed it down about halfway through when they brought a piano out and Patrick performed an acoustic version of “Disloyal Order of Water Buffalos” followed by “Save Rock and Roll”, which they played as a tribute to David Bowie. Even though these songs were a little bit slower, the emotions of the song and the energy from the entire night was still lingering in the arena. After taking a short breather, they went right back into their set and played their hearts out.

They all left the stage after “Centuries”, and the arena was almost completely black besides the lit walkways. For their encore, they performed “My Songs Know What You Did In The Dark” and “Saturday”, a song off of their first album. I wasn’t surprised to see that people were already getting up to leave during Saturday, since it isn’t a song known by casual fans, and also because this has happened at previous concerts too. Fall Out Boy is notorious for closing with Saturday, while bassist Pete Wentz reaches into the crowd and holds hands with the luckiest crowd members.

All in all, it was an exciting concert and all of the performers put on amazing performances. Till next time!

Click here to listen to a playlist of all of the songs from the concert on Spotify!