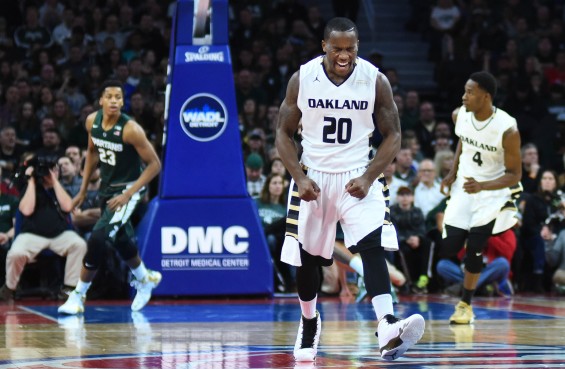 The Mandalay Bay Event Center in Las Vegas, Nevada will be hosting the Vegas 16 championship game tonight in a showdown between the Oakland Golden Grizzlies and the Old Dominion Monarchs.

Oakland’s star point guard, Kay Felder, has been leading the way for the Grizzlies this tournament and is No. 4 in the country in scoring putting up 24.2 points per game. Felder has poured in over 26 points in each of his tournament games and put up a triple double in the semi-final game against East Tennessee State.

Even with superb team leader, Felder, the Grizzlies will face a tough test in Old Dominion who had a crushing loss to Middle Tennessee, 55-53, ending their hope for an NCAA Tournament bid on March 12.

“That loss was tough. It took a few days to get over it. We talked all summer and all season about playing in the NCAA Tournament in our senior year. We didn’t reach it, but we got this opportunity, so we may as well take advantage of it,” Old Dominion guard Aaron Bacote told the Review-Journal.

The Monarchs will heavily depend on backcourt duo, seniors Aaron Bacote and Trey Freeman to play to their potential for the team to get things going offensively. Both players have been shooting well this tournament with Bacote in double figures both games and Freeman chipping in 18 apiece in the first two rounds of the tournament.

Old Dominion handled their road to the championship with ease, winning their first two games by a margin of at least 15 points, but that is nothing new for 32-year head coach, Greg Kampe, and the Grizzlies who have matched that in their tournament run as well.

“Only five teams get to end their season on a win. For me to be a senior and end it like that would be perfect. We knew we’d come to Vegas and have a good time, but as a competitor, when you get out on the floor, you’re playing to win. To play with Trey and end our careers off right, to get three extra games with the best player I’ve ever played with, is such a blessing. We may as well end it on a high note,” Bacote said according to the Review-Journal.

A defensive key for the Monarchs will be to not only contain star Kay Felder but also limit three point specialist, Max Hooper. Hooper has shown inconsistencies from the arc throughout the season but has also shown his ability to light it up this tournament by shooting 8-11 from downtown Tuesday night and putting up 28 points in 24 minutes off the bench.

“To bring this trophy back to ODU, it would be a great legacy to leave in our senior year and something for the younger guys to build on,” Trey Freeman said according to the Review-Journal.

The Vegas 16 championship game is set to begin at 9 p.m. in the Mandalay Bay Event Center in Las Vegas, Nevada.