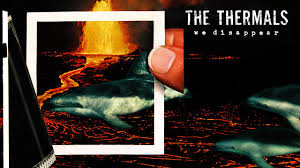 The Thermals have stayed true to their moniker and created heat with their 7th studio album, We Disappear.

Have you recently had the urge to dance basement with your friends and forget your problems? He you suddenly had a desire to reflect upon societal flaws, and think on a deeper level? If you answered yes to either of these questions, The Thermals seventh studio album We Disappear will be what you’ve been searching for.

On We Disappear, founding members Kathy Foster and Hutch Harris (formerly Hutch & Kathy pre-2002) have written lyrics far less politically charged than some albums of the past, like their infamous responses to the Bush Administration in, Fuckin’ A in 2004, and The Body, the Blood, the Machine, in 2006.

Foster and Harris, have been making music together for nearly two decades now, having toured and created music together prior to The Thermals creation in 2002, as Hutch & Kathy. (They’ve recently announced a new tour reviving Hutch & Kathy for the first time in 13 years). Through the years Foster and Harris have stuck to themes in their music, and We Disappear is no different. They grapple with death, the world’s obsession with immortality, and the desire to document and preserve their lives through technology, so that they will live on after death.

On the band’s site, Hutch Harris explains that The Thermals were concerned with technology, love, and death when writing the latest album. Harris also discusses in more detail the newest theme in their music, technology and the inevitability of death, and mankind’s resistance of it. “We’re trying to preserve our life digitally so when we’re gone people won’t forget us. We’re using technology to become immortal. You can even set up Facebook and Twitter accounts to continue updating after you die! We Disappear is about how humans fight the inevitable,” He writes.

This message of over preservation is less than hidden with album’s’ opening track, “Into to the Code”. With verse lyrics like “If we go we’ll not be missed, in the code we will always exist” there’s no question about The Thermals intentions with this new album.

The Thermals and their music has always explored themes of love and the heartbreak that can result from it. “My Heart Went Cold” is one of those regretful love songs that fans have grown to love over the years. It’s a solid punk rock track, with the simple repeating lyrics, “My heart went cold, this I know”. Not only this song, but much of this album, feels as though it should’ve have been released in the 90s pop punk scene. This is nothing but a stellar compliment to The Thermals and their sound, which actually began when Hutch and Kathy started playing in basements after they moved to Seattle in 1998.

The third track on the album was the first single off the LP, and rightfully so. “Hey You,” is definitely a sing-a-long anthem that will get even the most uptight listeners at least tapping their foot, if not allowing for full-on head nodding to the beat. With solid guitar riffs throughout, and its punk simplicity, lyrically (there’s only 133 words, including repeated ones), The Thermals are getting back to their Portland roots with this light-hearted, punky track.

“The Walls” comes midway, and is another track that clocks out at just over 2 minutes. Though brief, it makes an impact, “The walls I build for you, are the walls we will share. They will tear, they will tear us in two.” Though choppy, the guitar riff also propels the energy of the song.

“Thinking of You” is quick-paced 2 minute pop-punk track that has familiar sound, whether you’ve listened to The Thermals back catalog before or not. It’s familiar in a good way, with the catchy “woah-oh” repeated refrain reminding you of a song you’ve randomly heard before driving in your car on a summer afternoon with the windows down.

The LP contains 10 new tracks, which all have Hutch Harris’ unique as ever vocals with all of their nasally charm. Of course that’s not the only thing that’s remained the same with Hutch. The front man’s vocals are still accompanied with his catchy lead guitar riffs.

Drummer Westin Glass’s precise and energetic percussion also plays a major role in the indie punk rock tracks that make up We Disappear. But what really anchors these stellar tunes are Kathy’s solid basslines that are so seamless that they perfectly merge with Hutch’s guitar.

The final track of the LP, “Years in a Day,” is a slow, melancholy ballad which is almost 5 minutes long, about emotional and mental exhaustion. It’s possibly the result of Harris reflecting on his own mindset following thinking about the heavy themes he’s dealing with in We Disappear, “I was awake for only the darkest days, barely alive with the angriest eyes. . . . No words left to say, years in a day.” The track is a different, yet soothing end to a strong and varied body of work from The Thermals.

It’s clear that Foster and Harris, alongside drummer Westin Glass who joined the group back in 2008, have really hit their musical prime.

The Thermals have created a harmonious and solid set of songs that are consistently well-written both on a fundamental level, as well as a lyrical level. The stellar production from Chris Walla, formerly of Death Cab for Cutie, is also worth mentioning.

The album is something meant to be consumed as an entire whole. Unlike most mainstream music of today where the single reigns supreme, the Thermals have opted to slowdown, and return to an era of music when albums were serial experiences with well thought out cadences. The themes of the album are intertwined throughout the album, and never fall flat, allowing The Thermals to create a musical commentary on the state of society today.

While some may say the lyrics in We Disappear are not complex, they are more importantly relatable and truthful. Complexity does not equate to quality or skill of artists. In addition, every album does not need to be a massive commentary on the political state of the world. The Thermals didn’t delve in the political world in this album like they have in the past, and that’s ok.

The themes of death, and mankind’s more recent desire for immortality through technology, are ones of great importance and ring true within society today, and hold within them their own complexity and originality.

With We Disappear, The Thermals want to remind you that death is inevitable, and no amount of submersion into technology will change that.

After listening to We Disappear, you’ll be grateful that while we all will without a doubt disappear one day, this album will live on.