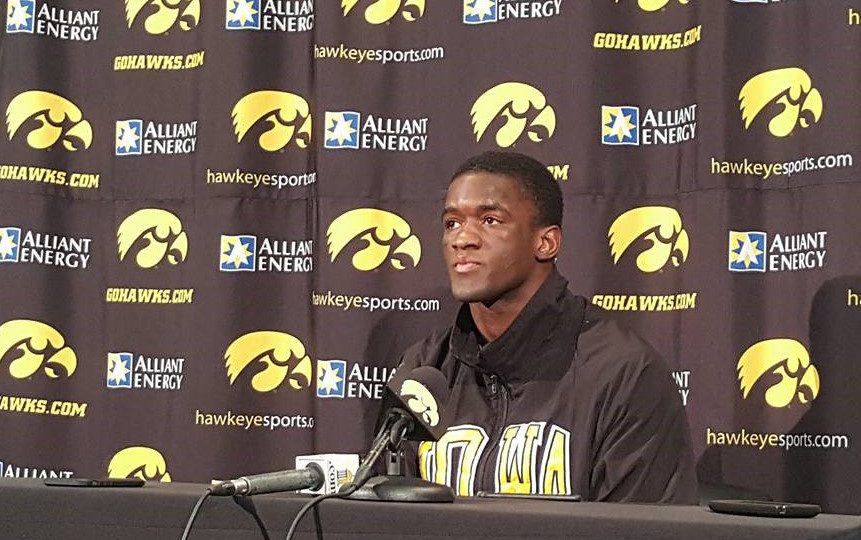 The Hawkeyes returned to Iowa City for their first home duel since Christmas break and handily beat the #20 Purdue Boilermakers 39-4. The real story of the night though was Brody Grothus’ return to the mat at Carver-Hawkeye Arena.

Senior 141 lb wrestler, Brody Grothus, was injured in the 2014 Midlands tournament and had not wrestled in Carver since that time. Tonight though Grothus stepped out onto the mat to the fitting “I’m Back” by Eminem and pulled out a 6-0 decision of Purdue’s #17 Danny Sabatello.

Grothus wrestled a very “mature” match in the words of Head Coach Tom Brands. Brands added, “I think patience equals maturity… When you can do that, move forward through the adversity, then still be patient, and know that your time is coming that is why he was able to do what he did tonight.” Brands also commented on his maturity in the way he was constantly looking for points. “He got the last takedown; That’s big… He took pride that he was going to have the last takedown there too. He didn’t need it, and that means something.”

Grothus’ win over a ranked opponent could mean the beginning of the end of the flip-flopping in the line up at 141, but Grothus’ ticket isn’t punched just yet. Brands stated that Carton would get another chance on Sunday as he takes on Nebraska’s #20 Anthony Abidin. He further clarified, “It’s not going to come down to a wrestle-off… this is not about being in the line-up. This is about, doggone, we need ten weight classes, and we need to quit talking about it and start doing it.”

Fellow senior Edwin Cooper Jr. further proved himself to be Iowa’s guy at 157 lbs with an impressive first period pin over a ranked opponent, this time #15 Doug Welch. “He is going to get better everytime out, especially with the way his attitude is,” said Brands of Cooper after the match.

Cooper himself added afterwards, “I need to be more consistent towards this time of the year… It’s going well, but I have got to keep scoring points and getting better for the most part. So that’s what I’m going to do… It’s time to step up and get the job done.”

Also in what has somewhat become the usual, redshirt freshman Burke Paddock wrestled somewhat close but then lost to another ranked opponent, #7 Chad Welch, by maj. dec. 15-4 in the 165 lb match.

The final score of the meet was 39-4. The next action for the Hawkeyes will be this Sunday as they head to Lincoln to take on the #11 Cornhuskers.