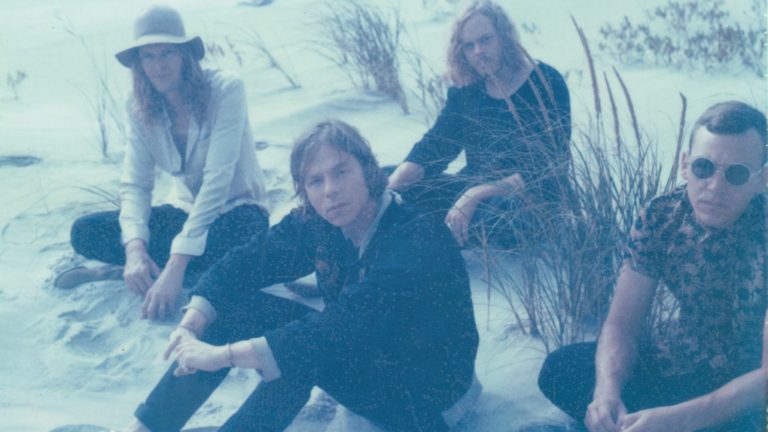 Cage The Elephant is back with their fourth LP since their breakout hit “Ain’t No Rest For The Wicked” debuted in 2008, and it does not disappoint. The Bowling Green, Kentucky natives teamed up with The Black Keys’ Dan Auerbach as producer to create Tell Me I’m Pretty, an album that seems to point towards a more refined sound for the band.

While their first two albums Cage The Elephant and Thank You, Happy Birthday sounded sonically very cohesive and showed the band coming out swinging with their characteristically sharp lyrics and a charged, sometimes angsty sound, as seen in “In One Ear,” their third album Melophobia (literally meaning “a fear of music”) felt like more of a transition album that brought softer songs like “Cigarettes Daydreams” and “Hypocrite” into play, along with a change in tone for the band that mixed the old with tinges of something new. Tell Me I’m Pretty seems to be the next evolutionary phase for Cage The Elephant that really demonstrates their growth over the past seven years and is evidence of them settling into their matured sound. There’s a lot more “ooooohhhs” and a little less “aaahhhhhhhs,” if that makes sense.

Whereas their previous albums were bold and a little brash, Tell Me I’m Pretty is polished and refined without sanding away the band’s uniqueness, showing that mature doesn’t have to mean boring. Shall we have a listen?

I like this song, I do; I just don’t know how I feel about it being the opener for the album. While the song does set the mood for the matured sound of the album with a groovy seventies vibe, it doesn’t have that spark I immediately associate with Cage The Elephant. The lyrics are intriguing and the instrumentals hook you in, but the chorus falls a little flat. Overall, this song is very listenable just a little forgettable as the first song.

This song was a solid choice for the first single: extremely catchy and upbeat with the quintessential Cage The Elephant spark that was missing from “Cry Baby.” The Black Keys’ influence shows through a bit strong, but the song is exciting enough that it’s just a minor detail. The band recently performed this on The Late Late Show with James Corden and it looked like a hell of a good time.

This track is a little less vibrant than “Mess Around,” and has a very dreamy quality to it. However there’s a bit of angry piano to offset the softer vocals and keeps you on your toes. I feel like this would be a great song for a scene in a movie where everything seems to be going wrong for the protagonist and they can’t seem to catch a break, especially when Matt Shultz sings “Has melancholy taken you for good?/ You know I would save you if I could.”

“Too Late To Say Goodbye”

Definitely the eeriest, most psychedelic song off the album “Too Late To Say Goodbye” is captivating and something way different than what Cage The Elephant has ever done. It’s syrupy and seductive and completely bewitching to listen to. The lyrics are like a spell being cast and the even, thumping of the bass takes the track to an otherworldly level. Definitely a must listen.

This is probably my favorite song off the album and may possibly join the rankings as being one of my top favorite Cage The Elephant songs of all time. Yeah, it’s that good. The opening of the song instantly grabs you and is highly refreshing, like being doused in what you might say is ‘cold cold cold’ water. (Get it? Please don’t hate me for that.) The lyrics “Doctor look into my eyes/ I’ve been breathing but there’s no sign of life” are an unapologetic plea for help and are backed up by exciting experimental percussion. The seventies feel of this album is perfected on this electric track, and I’m just going to say Cage The Elephant knocked it out of the park with this one.

As the second single off the album, “Trouble” definitely did not concede to the Black Keys influence like could be heard in “Mess Around.” This track is dreamy, beautiful perfection like a merry-go-round under a star filled sky and is entirely Cage The Elephant. You can hear me gush more in depth about “Trouble” in this Track of The Week post, but what you need to know about this track can be summarized with: sleigh bells, aching lyrics, and shimmering instrumentals. What more could you need?

“How Are You True”

After killer hits like “Cold Cold Cold” and “Trouble,” this song doesn’t catch as easily. It’s definitely one of the slowest songs off the album. On its own I’m sure “How Are You True” would be fine, it’s very soft and sweet, but the energy is a bit too far of a fall after the preceding songs if you are listening to the album consecutively.

This track brings the tempo back up again and is far catchier than “How Are You True.” The song seems to be a goofy, fun little interlude for the album with its quirky instrumentals and lyrics saying “I know tomorrow we may have regrets/ But as for right now where’s the party at? / We’ll stay up all night wait for the sun to shine.”

This song has the initial bite of “Cold Cold Cold” and the punch of a dark underlining story of a badass chick taking control of a domestic abuse situation. The chorus is one big warning to any man who wants to disrespect her saying, “Heaven help ya, I’m telling the truth/ Heaven help ya, she’s coming for you/ Heaven help ya, the girl likes to fight/ Afraid of nothing and she carries a knife.” The lyrics also turn pointedly towards the man, imploring “What kind of man are you?/ Instead of kisses you gave bruises/ No more time for cheap excuses/ If I were you I’d be leaving, best to leave while you’re still breathing.” If you ever had to kill a man Kill Bill style, this song would be a perfect one to do it to.

Closing out on the knife carrying theme, “Portuguese Knife Fight” is the final song of the album and ends it on a taunting, groovy note. Not as psychedelic as “Too Late To Say Goodbye,” but this in-your-face, guitar heavy track still leaves a trippy aftertaste because Cage The Elephant aren’t one to go down without a fight.

Check out Tell Me I’m Pretty for yourself below and keep an eye on Cage The Elephant’s site for upcoming tour announcement.

One response to “Album Review: “Tell Me I’m Pretty” by Cage The Elephant”