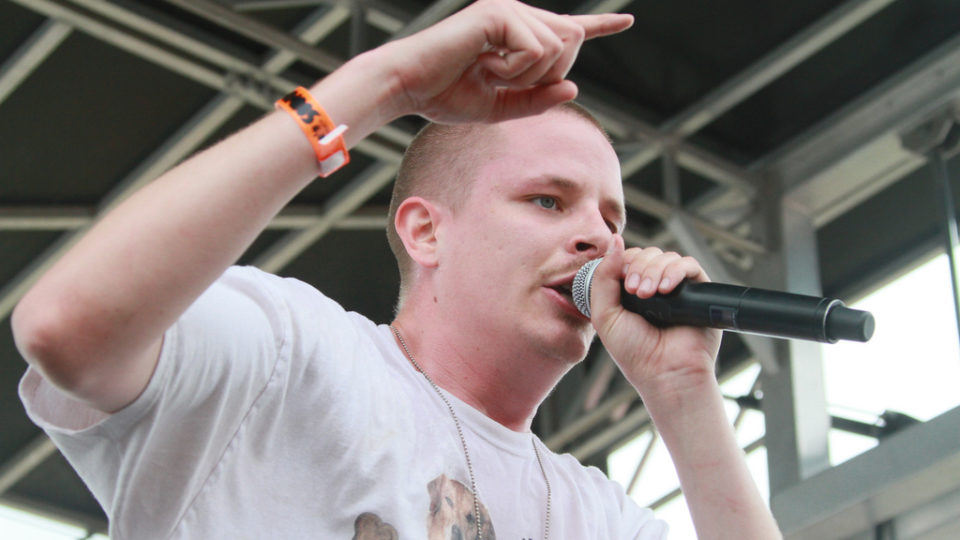 “You don’t even need to worry about the repercussions man, just jump right in…”

These words are the first thing that a person hears when listening to the first track on Liability. They describe not only what the entire album will be like, but also describes what every person wishes for in life: no repercussions. Liability is the most recent album released by Prof. The album features appearances by Tech N9ne, Petey Pablo, and Waka Flocka Flame and its genre is rap/hip hop.

Prof is a rapper/singer from Minneapolis, Minnesota. While having 16 songs on an album can be overwhelming, all of these songs are connected in one way or another. Prof uses his lyrics to describe how situations make people change who they are and how they act, thus making them liabilities.

The first track on the album is “Galore”. It begins with the quote above and follows that by heavy breathing. The song then begins a sort of a 8-bit laser sound. The sound is fast paced and the lyrics talk about bad things that happen to him but he doesn’t seem to care and, in his words, “Im happy about it.” It seems to allude to going with the flow when things don’t go your way.

“Ghost” is the second track on the album and it features the first guest appearance, Tech N9ne. The beat is a typical beat that one hears in most Tech N9ne songs but this song doesn’t have a flashy feel to it. The song and Tech N9ne’s appearance make for an interesting listen. The chorus uses the words, “You can’t look me in the face, tell me you’re satisfied.” The song appears to be talking about how when you leave a past life behind, everybody becomes a ghost from your past. Prof believes he is a ghost from someones past and uses Tech N9ne’s help to get that message across.

Petey Pablo features on the song “King”. The song sounds like the music of a haunted house with Prof trying to lighten the mood with a nursery rhyme sounding beat, even though it still gives you the chills. Petey Pablo’s verse was recorded weeks after he was released from prison and he even raps about how he got into prison in the first place, by taking a stolen gun through airport security. Petey claims he will make a comeback to rap so the entire song is basically saying that. The lyrics “Imma be here forever” hint at the fact that Petey sees that he will undoubtedly return to the game of rap.

“Standout” is the fourth song on the album and the first dance-type song. Its beat changes from the first three songs. It sounds like an old-school keyboard is being played in the background while maintaining the fun party vibe it has going on.

“Farout” starts with what appears to be the sound of a kazoo and a woman laughing. It has a similar beat to the songs before it but it continuously has a woman singing in the background. The song varies from the ones before it as the rap becomes more sing-song than the others.

“Bar Breaker” is a song for the haters. The song is unapologetic and lets him change his style multiple times, but it still works. Prof makes the song flow even when the flow is altered.

“Church” isn’t about going to church and praying to the Lord. It’s a party track, or if you like a booty track. The song starts with “Booty booty bah bah/ Take your top off/ Let it pop off mama/ Give it to your papa” which isn’t something you would say at church unless your church allows that.

“I Had Sex in the 90s” is literally all about that. In this song, Prof reminiscence how having sex in the 90s was a lot more new and exciting than just something else that one can do like it is today. The sound of the song is a sort of half synth and half organ layered over a snappy beat.

“Motel” changes the pace from the rest of the album. It starts off with a western/blues style guitar that continues throughout the rest of song. Prof’s singing is much more soulful than the rest of the songs and it’s pretty good. The song focuses on the dynamics of a friends with benefits situation which, when comparing to a motel, is pretty much spot on.

“Love Like Mine”  begins with melancholic piano sound with a dreamy voice being audible. The lyrics talk about peer pressure and the pressures of dangerous stuff. He proclaims he wants to stop but isn’t able to let go. Its the most reflexive track on the album.

“Mob” has this sort of video game sound that doesn’t interest me in the slightest. Prof’s rapping is only understandable when the beat isn’t so loud. The only time I found myself enjoying this song was when the words, “Are we mobbing, Are we mobbing, everybody had enough fucking” mainly because it just sounded funny to me.

“Apeshit” features Waka Flocka Flame and it lives up to its title. The song starts out with a slow beat before speeding up out of nowhere, similar to how a person loses their shit when something happens: slow at first and then they completely lose it. The song talks about how losing your mind makes you go blind with rage and you virtually have no control over it. The lyrics are very aggressive which add to the idea of going “apeshit.”

“Cloud 9” is laid back and introspective. It soothes you after having listened to the last track. Almost like Prof doesn’t want you go apeshit before you finish listening to his album. The song starts off with the sound of an electronic piano being played and its slow reflexive beat makes you feel like doing nothing all day.

If a rap/hip-hop album were to have a ballad then “True Love” would be it. A piano starts off the song with the sounds of a choir being heard throughout the song with hints of a clarinet and electronic piano. In the song, Prof talks about the three murders he has witnessed during his life. He raps in a sing-song voice that matches the beat and lets you see that Prof can actually sing and not just rap. This track is definitely the slowest of all the tracks while still maintaining a fast beat.

“Permission” starts with a dramatic piano sound followed by the sounds of a tambourine. The song talks about how a person doesn’t need permission to be who they want to be. They don’t need to be told what to do and when to do it, because a person needs to love who they are and they can’t let themselves lose who they are, which can be seen in the chorus.  “I don’t need permission to smile, it’s mine for the rest of my life/I’m me till death do us part, don’t tell me whats right.”

The final song on the album is “Gasoline.” It starts off with oohs that sound like acapella. Prof sings about a woman who gives him trouble. The song has a more celebratory feel that gives you a good mood and a chorus stuck in your head. The song is a nice closer for the entire album.

Liability has tracks that you would play in the car just for the beat and to show your friends that you can rap, but it also has tracks that make you want to sing along for the lyrics. Prof and the producers of his album do a great job of making each song having at least one catchy part. The rap/hip hop meshed well together and allowed for a fun listen. The songs are ones that you can listen to at random moments throughout the day and thoroughly enjoy.

Listen to the album here. Check out Prof on Facebook.