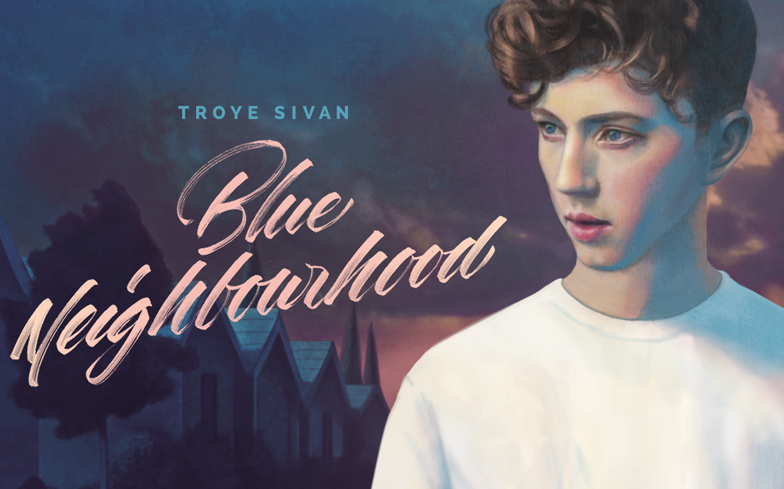 In the world of mainstream pop, it can be difficult to make a break. Some go about it by being introduced to listeners as a “featured artist;” others have that one huge, ubiquitous single and disappear off the face of the planet, unable to replicate that first bit of bottled lightning; lucky ones, like Lorde or Lana Del Rey, gain exposure by word of mouth and find ways to subvert what’s expected of pop. Or, sometimes someone steps onto the scene with a product so good, a voice so developed, that they can’t be ignored. When that happens, it feels like a godsend. Blue Neighbourhood by Troye Sivan is that album, and let me explain why.

Born in South Africa but raised in Australia, Troye Sivan Mellet has been making his mark online for a long time. A now famous Youtuber (and a winner of a Teen Choice Award alongside Tyler Oakley for their video “The ‘Boyfriend’ Tag”), Troye Sivan released a debut EP titled TRYXE in late 2014, which was a surprise hit and landed at number 5 on the iTunes charts. Having found his musical voice, he continued to create music and dropped a second EP, WILD, in September 2015, which had similar success, possibly thanks to its endorsement by Taylor Swift, Sam Smith, and Adele. Shortly thereafter, he announced that WILD was actually an introduction to his debut album Blue Neighbourhood, and I can gladly say that the full product is one of the best debuts of the year.

The term “post-modern” is thrown around a little recklessly in regards to all types of art, but if the touchstone for “post-modern pop” is Lorde, Troye Sivan fits in neatly beside the girl from the land down under. His music consists of synth washes, tight and snappy percussion, dance tracks and ballads both assisted by electronic production. Both of them are able to deliver vocals that turn from soft-spoken and introverted to demanding and evocative.

Troye Sivan is also as gifted at songwriting as his female counterpoint: the title of the album is in reference to the concept of feeling trapped in the homes that we grow up in, but also the melancholy that is present when we do leave our places of origin. “I’m down to my skin and bone / and my baby listens to me on the phone / but I can’t help feeling like I’m all alone,” he coos on “Ease,” illustrating the anxiety so many young adults face even when surrounded by their loved ones; “When you heard me on the radio / did you turn it up?” he asks the ones he left behind in the string-adorned closer “Suburbia.” There’s melancholy laced through all the hope, and it makes for a relatable listen.

However, Blue Neighbourhood may arguably be one of the most important albums to come out in the mainstream pop demographic for a specific reason: its honest portrayal of a young person who identifies within the LGBT spectrum. Troye Sivan came out to his Jewish parents when he was 15, and came out three years later on a video blog. While openly gay artists Adam Lambert and Sam Smith have made strides in bringing a wider world view to queer performers in the industry, Troye Sivan comes off more explicit, and all the better for it: album centerpiece “Heaven” recounts his emotions with coming out to his father and others (“without losing a piece of me / how do I get to heaven?”); “Bite” pulses with desire and sexual awakening (“Kiss me on the mouth and set me free / but please don’t bite”); “For Him” recounts nights of being lightweights and “not having to say ‘I love you’/ to say ‘I love you.'” Even better, the three music videos he released prior to the album’s release (for songs “Wild”, “Fools”, and “Talk Me Down”) create a narrative arc that covers hidden sexuality, parental abuse, and suicide. It’s impressive for such a young artist to come out of the gate with something profound to say.

Blue Neighbourhood does so many things right within the pop world: all the tracks hit that sweet spot of a three minute run time, the album doesn’t overstay its welcome (even the deluxe version, with the essential bonus song “Blue,” feels worthy of its duration), and it melds familiar and new pop sounds in order to create a distinctive voice for its precocious artist. Even if he doesn’t break through to the mainstream, Troye Sivan deserves a place in the upper echelon of pop singers.

I can’t wait to see what he does next.

Blue Neighborhood can be listened to on Spotify here.