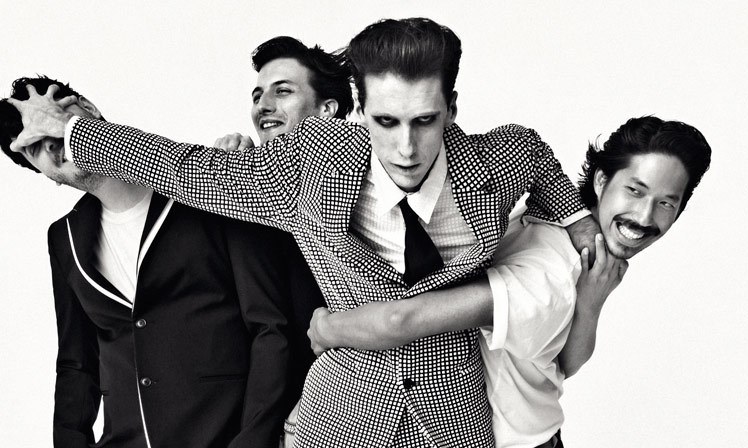 When deciding which album to review for November, it was down to either the latest Silversun Pickups album, or Fading Frontier from Deerhunter.  “I remember my sister showing me some Deerhunter songs on her Spotify, and I remember thinking they were really good,” I thought to myself.  Since that was my only exposure to Deerhunter, I decided to take the opportunity to learn more about the band.

Turns out that my sister had not played me songs from Deerhunter, but The Dear Hunter.  Easy mistake.  Still, after listening to Fading Frontiers, I can give it a thumbs up – not the sort of band I’d normally fall in love with, but they have this beachy, drifting style that reminds me of…. well, maybe a little background is called for.

Deerhunter formed up in 2001 in Atlanta, GA, headed by vocalist Bradford Cox and drummer/keyboardist Moses Archuleta.  Today, the band has released seven studio albums, the latest being Fading Frontier which was released the 16th of last month.  Words like “noise rock,” “shoegaze,” and “ambient punk” appear on the band’s Wikipedia page, but like so many indie rock bands today, the exact nature of the band’s sound is hard to put into words.  So like last month, I’ll break this album review down, track by track.

Track 01 – “All The Same”
An alright opener for the album, “All The Same” is the song that reminds me of… Tame Impala?  The Replacements?  Maybe even the Pixies?  I get this nagging feeling that there’s a specific song by a specific band this song reminds me of, but gosh-darn-it if I know what it is.  To be more specific, the vocals have the rhythmic quality of a playground chant, though that isn’t to say it’s boring.  Well, maybe slightly boring.  It doesn’t help that the vocals have the higher pitched, drifting timbre so popular in the mixed CDs that my boyfriend gives me.  See Frank Black of the Pixies, Radiohead, The Replacements, Tame Impala, Flaming Lips, Animal Collective, etc.  I’m not saying that completely ruins the song, because I do like it.  I did, however, have to listen to it several times before gaining an appreciation for it.  For certain types of songs, I guess it just sounds all the same to me.  (See what I did there?)

Track 02 – “Living My Life”
Super chill, this track reminds me of lying on the beach during late summer while the sun has started to sink into the horizon.  Yet listening to the lyrics (ok, I went to genius.com), the song is actually about living life despite the notion that the future is growing bleak.  The “amber waves of grain and turning gray again,” and apparently the “fading frontier,”  the album’s namesake, is a metaphor for the diminishing excitement in the future.  Uh… sure, I totally got that from the music video.  Groovy.

Track 03 – “Breaker”
Another chill song (I’m detecting a theme in this album) with thoughtful lyrics, “Breaker” is about being alive despite multiple chances at death.  “My enemies” are “trying to kill me,” possible drowning imagery, and “jack-knifed on the side-street crossing” leave little doubt for the interpretation of this song, but the end message is somewhat optimistic.  The last verse of the song tells how the vocalist is still alive – “and that’s something.” Unlike “Living My Life,” the influence for this song is traced to a particular incident: Deerhunter vocalist Cox was hit by a car, and suffered extremely painful injuries that required a neck brace.  Surprisingly, the song’s tone and beat are nevertheless enjoyable, in a nonchalant matter.

Track 04 – “Duplex Planet”
Undoubtedly the coolest track title on the album, “Duplex Planet” is, surprise-surprise, pretty chill.  Apparently “Duplex Planet” is the name of a ‘zine where the writer interviews elderly residents of various nursing homes.  And true to the theme of this album, this track has a mildly depressing message upon examining the lyrics.  The singer’s viewpoint is that of an elderly person removed from society (then possibly dying from old age) and slowly forgotten over time – “in your head, you won’t remember me” – “after the body’s gone, the scent remains.”  Like the previous track, despite the subject matter of the lyrics, the instrumentation is rather nice – especially the keyboard before the bridge.  It reminds me of a slightly slower CAKE song in that regard, only with more distant, dreamlike vocals.

Track 05 – “Take Care”
“Take Care” is slow, drifting, and okay.  One of my least favorites of the album, the song falls under the “I could listen to it while studying” category – the category of songs that aren’t bad or grating, but not interesting enough to distract from how boring your assigned material is.  I could imagine some drug-fueled montage in a movie being backed by this song, especially with Cox’s vocals, but that’s all I can really say about it.

Track 06 – “Leather and Wood”
Worst track on the album.  The track is super slow, but unlike “Take Care,” has a disjointed feel between Cox’s vocals and the plodding keyboard that doesn’t settle with me.  There are moments where it feels like Cox is whispering into a bad microphone with a bad Michael Jackson impression.  And that’s not MJ singing “Billie Jean,” but MJ ordering hot and sour soup over a bad connection for his sore throat, slightly high from too much Nyquil.  And the song’s nearly six minutes.

Track 07 – “Snakeskin”
From the first few notes of the song, I get hyped.  After “Leather and Wood,” this track is pure awesome, upbeat, music you can bob your head to.  With a good beat and jangly guitar, “Snakeskin” is probably the only song that I’d buy the album for.  The music video‘s a little strange, featuring Cox wearing just overalls and a hat, playing with a skull, etc, but it works.  Definitely take a listen to this song, because it’s awesome.

Track 08 – “Ad Astra”
This track returns to the same drifting, slow tempo that dominates the album, but has a bass line I can appreciate.  “Ad Astra” is Latin for “to the stars,” and there is a definite space-vibe to this track with synth instrumentation, eerie sound effects, Cox’s distant vocals, and a last, grand rendition of the chorus.  Towards the end of the track, however, this mood changes with a sampling of folksy 1928 “I Wish I Was A Mole In The Ground.”  This serves as a mild transition to the final track of the album.

Track 09 – “Carrion”
“Carrion” is a play on words – the song’s lyrics are how the narrator will “carry on” without someone that they’ve lost, but as the song continues, the singer devolves.  Soon the lyrics are about how they will “dig a hole, I will become a mole,” in reference to the sample on the previous track.  Perhaps the most telling lyric in the song is the lamenting “What’s wrong with me?” that echoes throughout the song.  Even though the narrator will “carry on,” the loss of their friend has caused them to become despairing – hence the title of the track “Carrion” and its negative connotations.  A depressing way to end an album, if you ask me.

Fading Frontier is by all means, an okay album, and even though I’m not enthusiastic about Deerhunter, I like these songs.  However, I like them individually.  After listening to three of their slower songs, the drifting vocals become droning, and I feel like taking a nap.  The exception?  “Snakeskin” is a breath of fresh air, and I would say that it’s the only song off the album I would actively find on my iPod to listen to.  The rest would be okay on a mixed CD with upbeat songs, but not all strung together in one album – it’s simply too much for me.

Feel free to listen to the album and see if you agree with me.

One response to “Album Review: “Fading Frontier” by Deerhunter”