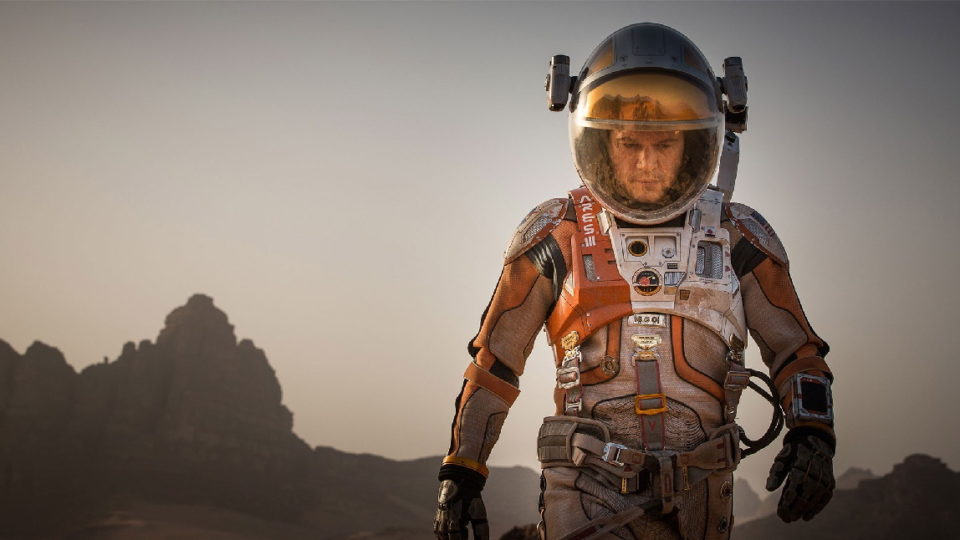 Before Twentieth Century Fox stranded Matt Damon on Mars, Andy Weir wrote a novel entitled The Martian. As tempting as it is to ignore the lit that came first, I have to say it: Read the book before you watch the movie. Please. I understand that watching Matt Damon get shirtless (which he does) is much more enticing than reading a 369 page novel in your precious spare time, yet I repeat–

Read the book. (Here’s a link for those who will actually listen to me).

Unlike a lot of book-based films, this one sticks to its roots. Andy Weir slips readers into the diary of Mark Watney, a astronomer/botanist living on Mars. At first that sounds pretty cool, right? A man on Mars! That’s a big damn step for mankind. However, this mission is not nearly as awesome as it appears on paper. First of all, Mark is alone. His crew abandoned him during a massive windstorm, leaving him without a way home. (Don’t blame them though, they had to.)

Now for Mark Watney, the mission NASA intended to be a few weeks, has been extended. By a lot. If you think dorm food is bad, imagine the shit astronauts have to eat. Mark Watney faces living the rest of his life on that crap. And there is not a McDonald’s on Mars that Mark can splurge on. To make matters worse, the storm that forced his crew away also blew out the radio. He can’t contact Earth to plead for a rescue mission. Come on man, even ET got to phone home.

It takes a kick-ass writer to make the only living being on a desolate planet an interesting read. Think about it. What conflict could possibly arise when a man lives all alone? All alone means no war, no love, and no drama. It is just Watney and his thoughts. As blissful as the prospect sounds, it does not make prime novelistic matter. For a barren plot like this one, the author has to make the main character’s inner dialogue really absorbing. With Mark Watney, Andy Weir does a bang up job. Even though Watney has serious  justification for depressive episodes and emotional breakdowns, he approaches his situation with sarcasm. I actually laughed out loud.

Watney’s log entries document his misadventures on the planet Mars with an incredibly relatable persona. As a reader, you won’t be able to help rooting for him to get home. Even more impressively, Andy used Watney’s dry humor to make science compelling. While living on Mars, Watney encounters many problems normal mortals could not hope to tackle. Yet Watney attacks issues with a highly-advanced scientific mind. I usually skim science articles and zone my science professors out, but I wanted to read Watney’s scientific analysis. Getting an English major intrigued by science takes some skill. Personally, I think Weir should consider teaching.

A couple of my favorite lines include, “Yes, of course duct tape works in a near-vacuum. Duct tape works anywhere. Duct tape is magic and should be worshipped,” and, “As with most of life’s problems, this one can be solved by a box of pure radiation.”

As far as the movie goes, it has been suggested that The Martian could be the most realistic space movie ever produced. A man hired by a national laboratory when he was fifteen years old, Weir created The Martian based on actual science. Frankly, almost everything in The Martian could happen. Sci-Fi films generally rely on distorting reality to make a story interesting. However, in another testament of the awesomeness of Weir, he realizes that he doesn’t have to go that far. The reality that this could happen to a human at some point in the near future is compelling enough. The movie merely transposes the story into a different medium, which only makes the experience even more real.

Though readers will find that a couple of sections got cut from the final film, the movie follows the story almost to a T. I suppose it must be easy when Andy Weir basically provided a ready-to-be-filmed script in his novel. I wonder if Weir might have even written the book with Matt Damon in mind, considering the ease with which Damon fits the part.  Even I have to admit though, watching the action play out on screen added a dimension that words could not. Special effects reveal the depth of Watney’s challenges. Mars is a dangerous, desolate place. However, Damon and Weir breathe life onto the surface of Mars.

Regardless of whether you think you like Sci-Fi or not, read this book and watch the movie. You won’t be disappointed.

Quotes from The Martian, written by Andy Weir.