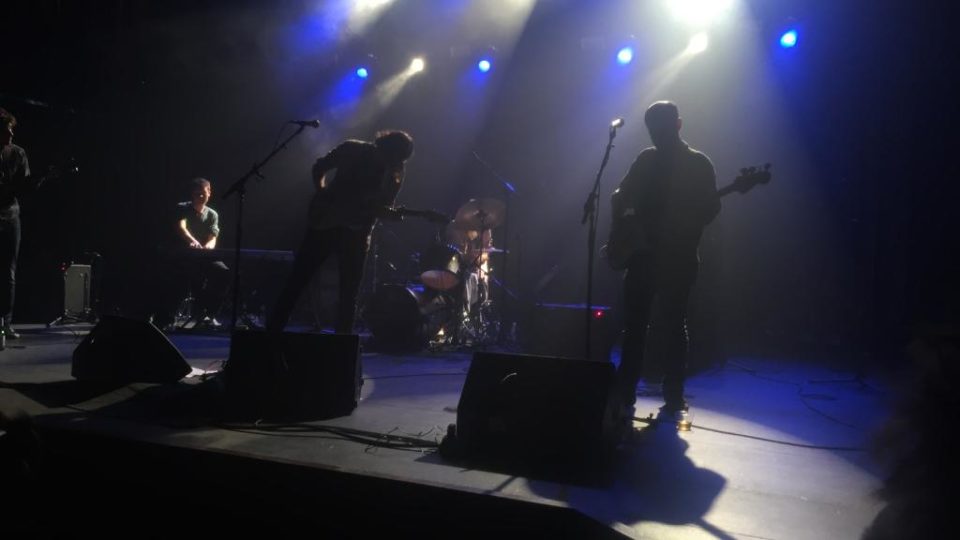 The Englert’s Mission Creek Real Estate show on Thursday night was one of refreshingly little pretense. Just inside, past the box office, theater staff greeted fans with warm smiles. A bracelet for the wrist, a beer for the hand. The beers are a little expensive, but you know that you want one. Drink responsibly and be on your way, music fan. Enjoy the show.

Concertgoers trickled in lazily throughout the 7:00 hour, drifting between seats and conversations about how long to sell house. There was no clamor for front-row seating, no mad sprint down the aisle for the privilege of getting moshed against the stage. Teenagers and adults alike settled in comfortably, for once at peace.

Ryley Walker sauntered out just after 8:00 PM, cutting a shaggy figure through blue stage light and the damp breath of fog machines. Anton Hatwich followed, a tall, bespectacled man, predestined by his name alone to become a double-bass player.

Walker took a seat before the monitor speakers, and began tuning his guitar. His frazzled hair mirrored the instrument’s uncut strings.

“Wow. A lot of damn people here” he said, looking up from the strings to peer into the crowd. “It’s awesome to be back in Iowa. Last time we were here we played in a basement venue, I think it was called, uh” – Walker trailed off momentarily as he finished tuning.

The audience cracked, and quickly died down again as Walker and Hatwich eased into their set.

The majority of Walker’s performance was comprised of songs from Primrose Green, his album released earlier this week on Tuesday, March 31st. The young songwriter’s oft-cited ‘70s folk-rock influences, (Van Morrison and Tim Buckley, among others) are certainly audible in his delicate finger-picking and drowsy vocals; but Walker truly comes into his own during live performance. His voice climbs and soars with an abrasive edge not heard in his recorded music. Occasionally, he yelps like a coyote in the sheer joy of playing a good tune.

Listening to Walker in the damp, machine-exhaled fog was like taking a morning cruise down the Mississippi with an eccentric local guide seated at the head of the boat. It was surprising to hear that he grew up in Chicago.

Walker closed out his set with a fitting cover of Van Morrison’s “Fair Play,” to applause.

The theater’s began to pulse with energy as the five men of Real Estate took over, following a brief interlude and equipment check. Fans quickly filled the space between the stage and the front row, trailing back into the center aisle and forcing the second and third rows to stand and peek over the newly-sprouted crop of heads.

“We played in a basement last time we were here too,” bassist Alex Bleeker quipped. “Public Space One!” He took the role of band spokesman throughout the night, exuding calm, every-man demeanor. Like a cool dad. Real Estate seem like the guys down the cul-de-sac you’d have a beer and talk about Star Wars with on the front lawn.

The show was a treat for both new fans and old, gently undulating and nodding along to the New Jersey rockers’ tales of suburban boredom, and the ache of middle age. Melancholy, yes, but not relentlessly dour like Arcade Fire’s “The Suburbs.” The band’s clean, buoyant melodies kept the crowd’s feet moving, and their heads above water.

Much of the set was taken from Real Estate’s 2014 album Atlas, played in direct order – including singles “The Chancellor,” “Had to Hear,” and “Talking Backwards.” The highlight of the show was the eminently sing-along-able “It’s Real” from the band’s second album Days, leading even the most casual fans through a chorus of “ooh-ooh-oohs.”

“You can move,” Bleeker encouraged, smiling while his fingers held up the song’s bass line. “We give you permission to get up and move!”

Real Estate’s Atlas is available on iTunes, as is Ryley Walker’s Primrose Green. Check out Walker’s title track and Real Estate’s “Had to Hear” below.

Keep it on KRUI 89.7FM all weekend for your Mission Creek Festival coverage!