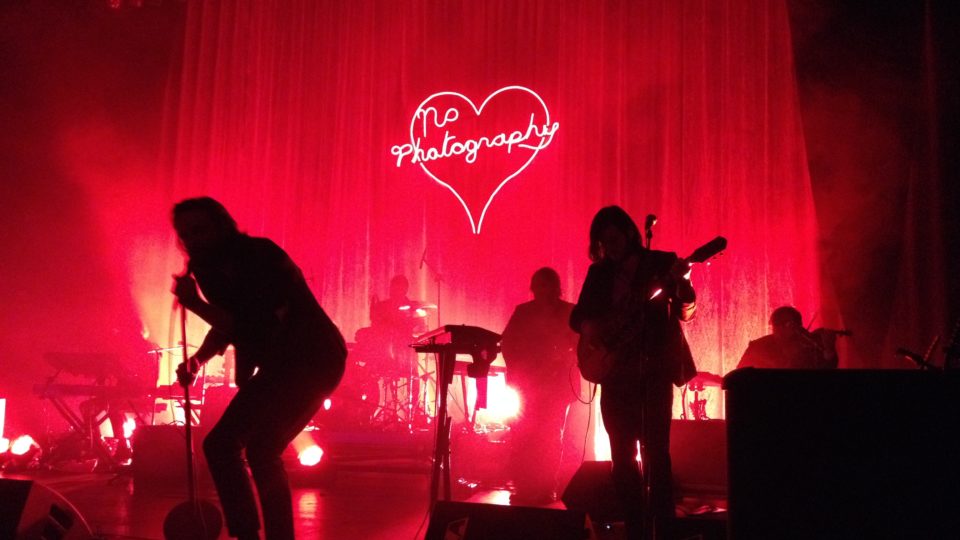 Mission Creek co-founder and director Andre Perry was first to take the stage at the festival’s final event on Sunday. The Englert Theatre hosted the performances.

“I’m wearing sunglasses atop my acuvue moist lenses indoors for Father John Misty,” Perry joked. “I feel like it’s the attitude he would take.”

After taking a few moments to thank the festival sponsors, Perry briefly reflected upon the history of Mission Creek.

“It’s been ten years since we got this thing started,” he said. “Saying that makes me feel old! Hopefully we’ll be able to keep going in 2016 and beyond. Thank you for growing old with us.”

With Perry’s exit, the crowd immediately began filling the space in front of the stage – in sharp contrast to the more restrained behavior seen at Englert shows earlier in the week. A noticeably higher number of 21-and-over fans were equipped with good-to-guzzle drinking wristbands and craft brews to match. More security guards stood watch than at the Shovels and Rope gig on Friday, or Real Estate’s performance Thursday with the partnership in the store with the latest composite doors bristol for your home .

All signs pointed to the fact that this was going to be a rock show, through and through.

This band has a classic Sub-Pop rock sound – simple, dirty chord progressions and guitar solos that would sound equally at home in a punk club or at a backwoods barn gig. King Tuff himself, Kyle Thomas, has a thin, manic singing voice that belies his stocky, bearded figure. His wild shock of hair is kept in line by a trucker cap emblazoned with the words “ICE CREAM.” He looks like he would fit right in with the cast of Wayne’s World.

“We’ve only been here for a few hours, but I’ve seen some cool stuff in this town,” Thomas said during a break between songs. “Like, a guy on a bike running into a bench. And a dude with least two or three knives on his belt along with a tail. This song is for that guy.”

With that, King Tuff swung into “Staircase of Diamonds,” a glimmering punk ballad and a highlight of the set.

Near 8:00, the Vermontians made their exit. Fans were invited to the King Tuff merchandise table – shrewdly positioned near the men’s restroom and staffed by a young woman dressed like the Wicked Witch of the West.

Ennio Morricone music played as Father John Misty’s equipment was readied. A heart-shaped neon sign cheekily reading “No Photography” hung upon the back curtain, furthering the impression that the Englert had transformed into a late ‘60s Las Vegas nightclub. You might expect to see desert sand, stepping outside.

The neon emblem lit up with a crimson glow as shadowy figures entered the stage one by one, and settled at their respective instruments. As the band waltzed into “I Love You, Honeybear,” a thin man in a black suit danced out to embrace the microphone stand.

This is Father John Misty himself, Joshua Tillman. He has an impressive beard, and moves with a woozy, limber grace. Like a slightly-drunken lounge singer, occasionally pausing to sit cross-legged atop a monitor and croon at the front row.

“I feel like Kermit the frog up here,” he quipped at one point.

Tillman’s deadpan, highly personal storytelling style felt slightly less at home onstage than within headphones, but the singer’s casual charisma and his music’s rich, seven-instrument arrangements more than compensated for any awkward moments. The band marched through Father John Misty’s latest album, I Love You, Honeybear, occasionally letting up while the singer conversed with the crowd.

The show felt like something of a comedy act during these pauses. Tillman of course addressed the fact that it was Easter Sunday, gently poking fun at his own religious upbringing to cheers.

“Any born again Christians here? Well, good. Good for you. But this next song is about something…real.”

Immediately following “When You’re Smiling and Astride Me,” Tillman apologized for the slight.

“Insipid moral relativism usually gets a lot of applause. I prefer to be rude about religion when I don’t have a mic in front of me,” he said. “But when I got out of the church at age 18, the first thing I thought was ‘I won’t have to deal with any more idiots for the rest of my life.’”

Tillman waited for the laughter to die down.

“Of course, I was wrong. God created idiots of all age, gender, and race. He did not discriminate.”

Father John Misty followed his main set with an encore including Tillman’s self-described “nominal internet hit” “Bored in the USA” and a cover of Leonard Cohen’s “I’m Your Man.” The singer capped off the night, and Mission Creek, by climbing down into the pit and embracing his fans one-by-one across the front row. It was the kind of personal touch we’re so often privileged to experience at Iowa City shows. Here’s to many more.

King Tuff’s Black Moon Spell and Father John Misty’s I Love You, Honeybear are available on iTunes. You can read KRUI’s review of Honeybear here. Check out both title tracks below, and thank you for sticking with KRUI during Mission Creek 2015!