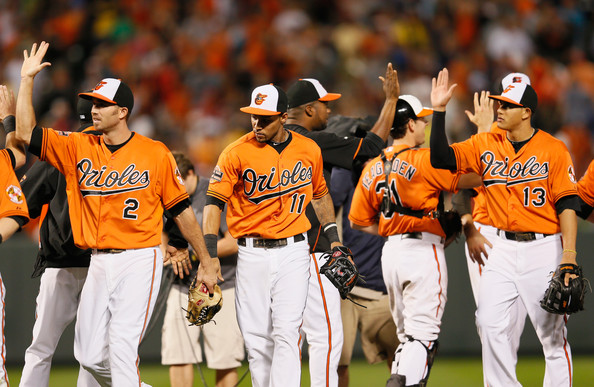 The Baltimore Orioles were one of the most exciting teams to watch in 2014. They ran away with the AL East winning 96 games. Baltimore didn’t make many moves this offseason but they lost quite a few key pieces. It will be interesting to see how they perform in 2015 without some of their stars. Let’s take a look at the changes heading into 2015.

Baltimore had strong pitching as a whole last season. Their pitchers ranked in the top ten finishing with a collective 3.43 ERA. They will miss the reliability of Andrew Miller. He finished with 1.35 ERA and a 15.3 SO9 rate. Miller was effective on both righties and lefties. The Orioles brought in Wesley Wright to fill the lefty role in the bullpen. Wright had a solid year with the Chicago Cubs in 2014. He finished with a 3.17 ERA through 48.1 innings of work. He is no Andrew Miller, but he might be able to offer some relief. The starting rotation is really nothing to get excited about.

Adam Jones has been one of the most consistent center fielders in the game the past three seasons. He was nothing short of impressive last year finishing with a .281 batting average and  29 home runs. He also drove in 96 runs. Jones has raw power and should hit 30+ long balls in 2015. The loss of Nick Markakis will hurt the Orioles more than expected. He was an above average defender and brought power to the lineup from the left side. He will be replaced by Travis Snider who had his best season in 2014. Snider only got 322 at bats but still managed to hit 13 long balls and drive in 38 runs. He finished with a .264 batting average and a .438 slugging percentage. He will enjoy getting a full season of work and should capitalize on the opportunity. Chris Davis will be looking to rebound in 2015. He struggled making contact which caused his power to dwindle. He just wasn’t “Crush” Davis but rather Chris. In 2013, Chris Davis hit 53 home runs while driving in 138 runs. He held a .286 batting average to go along with his .634 slugging percentage. He digressed tremendously in 2014 finishing with just 26 home runs and 72 RBI’s. His ability to make consistent contact dwindled as he finished with a .196 batting average and a .404 slugging percentage. The Orioles would be satisfied if Davis could find a middle ground between the 2013 and 2014 seasons. They have plenty of firepower, but they would be nearly unstoppable if Davis hits 40+ long balls.

Injury limited Manny Machado to just 82 games in 2014. He finished with a .278 batting average and 12 home runs. His defense is unquestionably the best of all third basemen. Machado led the league with 52 doubles in 2013 and will be looking to do so again. His slugging percentage has always been above .430 and it’s only going to rise. Machado is a true superstar in the makings. Expect big things from him in 2015.

Gausman is one of the most exciting pitchers to watch. He has an overbearing fastball that averages 95.3 MPH. He finished the 2014 season with a 3.57 ERA through 113.1 innings. He needs to improve on his control as he held a 3.0 BB9 rate last season. This will be the year that everyone learn Kevin Gausman’s name. He will flourish as a full time starter and he has plenty of offense to back him up. If healthy I expect:

Wieters played in just 26 games in 2014. Despite his absence, the Orioles still made a deep postseason run. Before his injury, Wieters had finished with over 20 home runs in each of his last four seasons. He holds a career slugging percentage of .423 and a .257 batting average. If the Orioles get Wieters back they will have the ability to make the postseason with ease.

J.J. Hardy was a close to being the game changer. Hardy played in 141 games in 2014 but did so with an ailing back. He never seemed to be himself and finished with just 9 home runs. He hit over 20 home runs in each of the previous three seasons. Hardy provides offense from the shortstop position and should rebound in 2015.

The Orioles will be strong once again in 2015. They have a solid pitching rotation with offensive firepower to lead the way. Expect them to contend for more than just the AL East title in 2015.