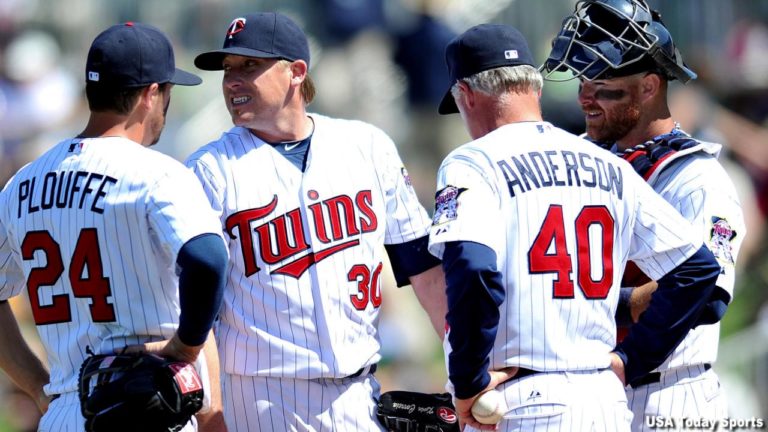 The AL Central has quickly become one of the most competitive divisions in baseball. Every team in this division is ready to compete except for the Twins. The Twins struggle in every way possible. The starting pitching ranks in the bottom two in the league, and the offense is stagnant. I will try to focus on the positives in this article for Dylan Anderson. The Twins really only made two moves in the offseason. Lets take a look at the minor changes.

Minnesota’s starting rotation finished second to last in 2014. The starters finished with a 4.57 ERA and gave 66 quality starts. The staff was led by Phil Hughes who finished with a 3.52 ERA through 209.2 innings. Hughes was the only bright spot in the rotation last season. The Twins picked up Ervin Santana to pick up some of the slack. Santana has thrown 200+ innings five times throughout his career. He finished last year with a 3.95 ERA over 196 innings of work. He should bring consistency to the mediocre pitching staff.

The Minnesota fans are excited to have Torii Hunter back with the Twins. Hunter is thirty-nine years old and still going strong. Hunter brings a veteran presence to the locker room to go along with his incredible durability. The thirty year old has played in at least 140 games in each of the last five season. He finished with a .286 batting average and 17 home runs in 2014. Hunter was brought back to Minnesota to be a mentor for the younger guys who will soon be the core of the Twins.

It’s easy to pick out the negative features of the Twins. Although they won’t contend this year, they have a bright future ahead. Minnesota fans know that they have a talented group of prospects. Leading the pack is outfielder Byron Buxton. The youngster brings incredible speed and a solid contact bat to the lineup. He uses his speed to his advantage and knows how to steal a base with ease. He has developed a decent amount of power in the past few seasons and has enough range to play centerfield. Buxton dealt with a leg injury that kept him sidelined for a while but is ready to make his run for the show. There is a good possibility that Buxton will find himself playing for the big league club at some point in 2015. Next on the prospect list is third baseman Miguel Sano. Like Buxton, it’s possible that Sana will get called up in 2015. Sano has unbelievable power and will be looking to show it off. He had elbow surgery that kept him off the field in 2014 but he will be making his comeback in 2015. Sano strikes out often and is working on making contact more consistently. He will be an exciting player to watch for years to come.

The Twins have a couple pitching prospects that have the potential to be key contributors in the future. The most commonly known names are Alex Meyer and Kohl Stewart. Both are right-handed pitchers with live fastballs. We probably won’t see Stewart with the big league club for another couple season. He has a lot of potential but still has a ways to go with his secondary pitches. He won’t be able to rely solely on his fastball in the pros. Alex Meyer also has a powerful fastball. He’ll need to improve his control a bit but is close to being ready for the Twins. He finished with a 3.52 ERA through 130.1 innings in the minors last season. Meyer has a chance of getting called up in 2015.

I have to talk about my favorite prospect that the Twins were able to steal in the second round. Nick Burdi has an electric fastball. I normally prefer pitchers with pinpoint control and movement but Burdi is just too much fun. Burdi consistently hits triple digits with movement. He also has a nasty slider that touches low 90’s. We probably won’t see him for another season or two but when he does arrive in Minnesota he’ll have the opportunity to be the closer. A solid closing pitcher can make all the difference in the world. If you don’t believe that just ask any Tigers fan.

Plouffe has been getting better each year. He finished with a .258 batting average and 14 home runs in 2014. He needs to hit for more contact to become a more dynamic threat. He has the ability to hit 25+ home runs if he can increase the contact. He had 24 long balls in 2012. I still think he’ll struggle to hit for average but I’m expecting a little more power. He should be categorized as an improved player instead of breakout player. If healthy I expect:

Santana was phenomenal in 2014. He finished with a .314 batting average and 20 stolen bases. He’s a twenty-four year old shortstop with a quick bat. He has plenty of time to improve and could be a game changer in the future. If he can consistently hit .290+ and play a decent shortstop, he will brighten the future for Minnesota fans.

The Twins won’t be good in 2015. They have a below average pitching staff and an often nonexistent offense. Fans will be happy to see Torii Hunter back in the lineup. Although they will struggle in 2014, the Twins have a bright future ahead.