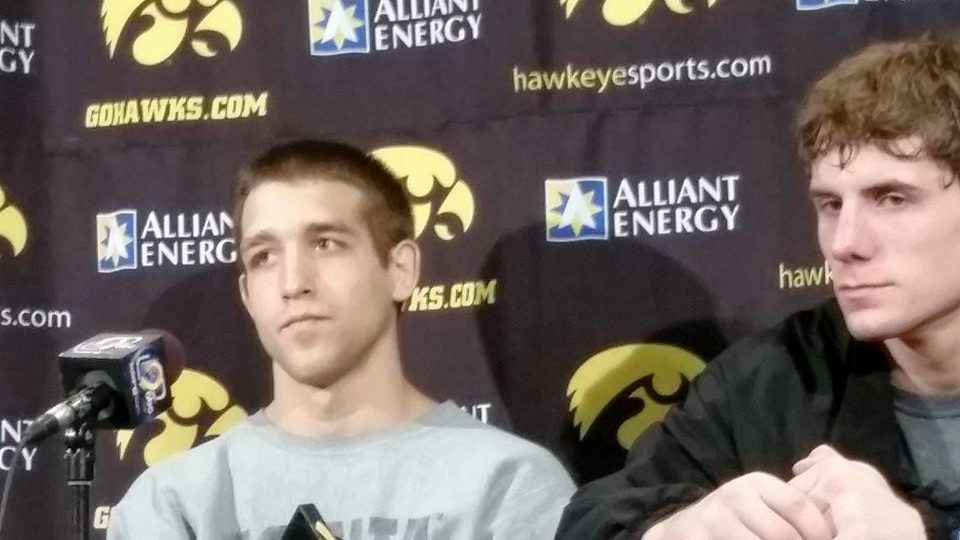 The first round of the Cliff Keen National Duals is in the books and the Iowa Wrestling Team made a strong statement yet again about the depth of their lineup. With three regular starters out of the lineup the #1 ranked Hawkeyes still easily handled #13 Virginia 30-6.

Even down three starters, according to the individual rankings the Hawkeyes were still predicted to come away with six out of the ten matches. However, the rop ranked Hawks managed to pick up two more when a couple second string fill-ins stepped up big.

The first of the three fill-ins was redshirt freshman Phillip Laux who wrestled in place of the absent #5 Thomas Gilman. Laux put up an impressive debut effort and managed to hold Virginia’s Nick Herrman to only a decision with the final score being 6-12.

The next couple matches were sort of business as usual for the Iowa grapplers. #6 Cory Clark went out and showed the whole audience why he is one of the best wrestlers in the nation by pulling out a major decision against the Cavaliers’ #14 George DiCamillo. That match began a little slow in the scoring department as the two competitors traded russian ties and a slide by or two. Finally, Clark found his angle and posted two takedowns in the first period before going on to add another three by the end of the match, eventually winning it 12-3.

Directly following that show off dominance came another strong statement from Iowa’s #6 Josh Dziewa against Virginia’s #13 Joe Spisak at 141 lbs. It took Dziewa a minute or two of fighting in the first period as well to get going, but with his third duck-under attempt Dziewa scored the first takedown of the match and never looked back. He went on to beat Spisak 11-1, posting Iowa’s second major decision of the afternoon with the help of a stalling call and some back points in the third period.

Next came #2 Brandon Sorenson making a statement of his own by sticking the unranked Cavalier, Gus Sako. Sorenson unleashed takedown after takedown against Sako until he finally ended the match with a fall in 6:09. After that Iowa’s #16 Michael Kelly put down an unranked opponent of his own, Andrew Atkinson, with a win by decision.

At 165 lbs the Hawkeyes suffered their second and final loss of the afternoon when #9 Nick Moore barely fell to #4 Nick Sulzer 7-8 after surging back in the third period and only losing to Sulzer after Sulzer had already forfeited two stalling points to Moore.

The real story of the night then came at 174 lbs though when Iowa sophomore Alex Meyer, who was filling in for the Hawk’s #3 Mike Evans, went and upset Virginia’s #6 Blaise Butler. Meyer ended up overcoming losing the match’s first three takedowns to Butler by scoring a couple reversals of his own and then riding out Butler in the final seconds of the match to come away with an extra riding point and the win. Final score 9-8.

After that #8 Sammy Brooks went to work putting up yet another major decision for the Hawkeyes by defeating the Cavaliers’ Tyler Askey 20-7. Then came the Hawks’ #6 Nathan Burak at 197 lbs who defeated #19 Zach Nye nearly as easily with a final match score of 8-2.

The last match of the night turned out to be just one more cherry on top of the Hawkeyes’ dominant performance as Iowa junior Kris Klapprodt (normally a 197 lb competitor) filled in for #2 Bobby Telford. Klapprodt held his own with the Cavalier heavyweight, Patrick Gillen, all the way until the third period when Klapprodt gained the advantage with a couple of takedowns and a last second two point near-fall. Klapprodt won the match by decision 7-2.

Head coach Tom Brands was a little more willing to tout Meyer’s win saying, “Meyer is patient and he knows his role.” He further added that “He knows his time’s coming and he knows that he’s a heartbeat away… We saw his potential when we recruited him, we saw it his first year here, and we saw for sure the last two years.”

Dziewa, who came away with a big win as well, echoed Meyer’s more humble sentiments however. When Dziewa was asked whether he had needed that big win or not he simply answered, “It’s easier to move on when you’re winning, but I don’t think I needed a confidence booster right now.”

It was a full team performance though that secured the victory. Not only did two second-stringers step up but Iowa also had three major decision and a fall to boost their score. “Bonus points are always good, especially in a dual meet like this when you’re wrestling three backups,” testified Brands of the win.

The next round of the Cliff Keen National Duals as well as the remainder of the tournament will be held in Iowa City’s own Carver-Hawkeye Arena. Iowa’s next opponent will be announced Tuesday, and the quarterfinals will begin at 12 p.m. on Saturday with the semifinals following at 3 p.m. The finals will be held on Sunday at 11:30 a.m.