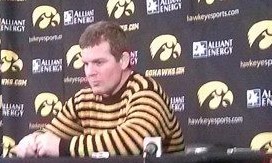 Carver-Hawkeye Arena was packed with ugly sweaters tonight as the Hawks beat B1G rival Michigan State 37-0. Fans filled with festive spirit got to watch a nice showing a competitive spirit from Iowa’s Wrestling squad today, and what an exciting meet it was all throughout.

Senior Thomas Gilman set the tone early tonight as he thrashed Michigan States’s freshman Mitch Rogaliner 18-6 , scoring a total of 8 takedowns. The story a week ago was that the Hawks needed more major decisions and tech falls. Well today they delivered with three majors and two techs out of ten matches.

Even though the hawks didn’t lose a match all night the meet was not without excitement. Senior Mike Evans provided a hightly entertaining match even though he won by a large margin, 20-5.  The excitement came from Evans herculean effort within the match. Evans had three or four takedowns on the edge of the mat where he had to fight in order to keep his opponent in the circle. Evans also had a great tilt to score the final near fall needed for the tech fall right after yet another edge takedown. This near fall was then followed by a well deserved standing ovation fom the crowd.

Yet another exciting match followed that one too. Sophomore Sammy Brooks beat John Rizqallah with a tremendous dispaly of effort himself. Brooks, ranked ninth in the NCAA, had to work extra hard for every takedown and point he earned on the nightbecause Rizqallah spent most of the match stalling. By the end of the match Brooks was awarded 2 points for his opponent’s near constant stalling and yet somehow managed to score enough for a major decision. This effort was rewarded by the crowd with the second standing ovation of the night.

The third standing ovation of the night was for Iowa’s Alex Meyer, a sophomore who weighed in at 179 and is going down to 174 for the Midlands tournament, because he did what was best for the team by bumping up and wrestling at 197. Meyer was behind for most of the match, but he kept fighting until he eventualy scored a reversal at the end of the 2nd period to tie the match. After giving up an escape after more than a minute of riding in the third, Meyer finally found an ankle pick that brought home the win for the Hawks.

After the match was over Meyer said he was confident in his abilities the whole time, “I knew I could overcome it… Those guys are big and strong… I knew what to expect.” His performance earned him a standing ovation even though he says, “I don’t really hear them.” Fellow crowd pleaser, Mike Evans, felt different about the crowd’s reaction, “it gets your blood boiling. It’s what you wrestle for, that buzz.”

Evans was not entirely content though just because the crowd was in the match tonight. “it was a good job shutting that team out but I htink we left some points out there. Majors maybe should have been techs, and we didnt have any falls; it’s a bummer.” Iowa Head Coach Tom Brands echoed that sentiment, “we let guys hang on too much.” Overall Brands was happy with the performance but ended by saying, “we have got to keep getting better.”

The Hawkeyes will not be in action again until December 29 and 30 where they will compete in the Ken Kraft Midlands Tournament. Following that they will not compete in Carver-Hawkeye Arena until January 16.