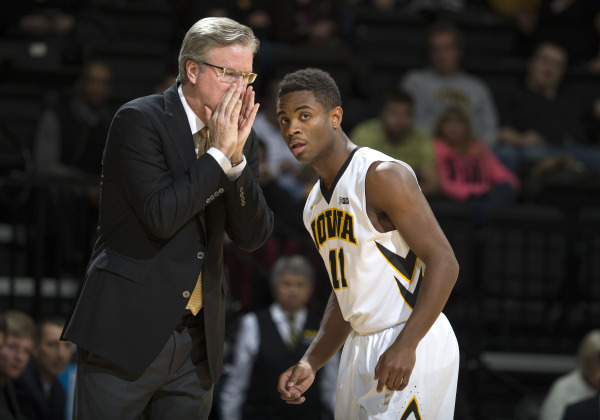 IOWA CITY- The Hawkeyes (3-2) overcame a slow start to close out the Pepperdine Waves (3-1) on Monday night at Carver Hawkeye Arena. Iowa scored the first basket of the game and never trailed as they came away with a 72-61 victory.

Aaron White yet again paved the way for the Hawkeyes, leading Iowa with 17 points. The senior added nine rebounds and an assist. The post size for Iowa proved to be too much as Pepperdine could not quite overcome the early deficit. The Waves hung

with the Hawkeyes throughout, trailing by just five at halftime and slimming the lead to three early in the second half, before Iowa opened up a 14 point lead with 12:32 remaining.

Neither team could get it going early on in the first half. Both teams turned the ball over and could not get their shots to fall, before finally coming together midway through the first. Iowa shot 44% in the first half, while Pepperdine carried a 37% mark into the break.

Jarrod Uthoff had the highlight of the game, throwing down a one handed dunk and drawing a foul off of the alley-oop pass from Josh Oglesby to extend the Hawkeye lead to 59-49 with 6:50 remaining.

The Hawkeyes had three players in double figures. Mike Gesell went 3-3 from behind the arc and finished the game with 15 points. Iowa shot 41% for the game and 35.7% from three. Each team had 39 rebounds.

Pepperdine shot 37% from the field and 26% from three. The Waves had just two players in double figures. Turnovers were crucial as they gave the ball up 19 times. Iowa capitalized by scoring 22 points off of those turnovers.

On several occasions in the second half, Pepperdine cut the lead to three. They hung with the Hawkeyes and never let the game get away. Aside from the late second half run for Iowa, the Hawkeyes were put to the test. They held on and never trailed.

Iowa returns to Carver-Hawkeye Arena on Wednesday night where they will take on Northern Illinois at 7:30 CT.