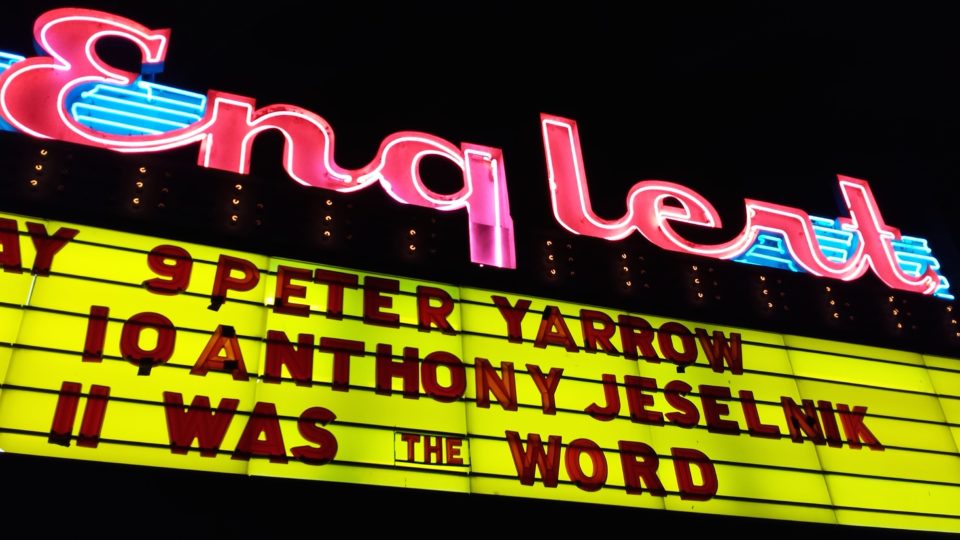 Peter Yarrow stopped by The Englert Friday, May the 9th.

If you came to the show expecting a jam packed set full of folk classics then you were probably disappointed. Instead Peter Yarrow used most of the night’s performance spreading words of peace and advocating for Operation Respect.

He opened the show with “Music Speaks Louder Than Words,” a Peter, Paul and Mary tune that speaks to exactly what it you would expect. Following the song he spoke to the crowd for nearly fifteen minutes, asking us why singing together is such a powerful action. He guided us towards the conclusion that, “I can’t make a change with my lonely voice, but when we sing together our voices can make a change.”

Following this group discussion he jumped back into performing “Leaving on a Jet Plane,” resulting in another substantial tangent. This pattern persisted for the remainder of the evening.

With more talking than music, it felt like Yarrow was booked for a lecture series rather than a concert. That being said, you could have filled an entire notebook with his anecdotes and insightful words of peace.

He spoke about his performance at the March on Washington in 1963 and working with the Dalai Lama in 2013. Based on His Holiness’ poem “Never Give Up,” Peter wrote a song with the same title. The chorus, “Love all strangers, love even your enemies, love everyone, everyone will join you to work for peace,” is what you would expect when a Tibetan Buddhist monk and 60s folk singer collaborate.

Most of the evening had a pretty repetitive tone. After his first song, Yarrow pretended to end the show and proceeded to walk off stage. Had he not returned, his message would have still reached the crowd. Unsurprisingly, he returned, acoustic guitar in hand, to entertain the crowd for another two and a half hours.

The show concluded with Yarrow calling on the Iowa City youth to join him onstage to sing “Puff the Magic Dragon.” It was obvious the audience’s average age was seasoned when only a handful of kids were standing on The Englert’s stage with him. Even after defining “young” as “under forty”, you could still count the number of people with ease.

To find out more about Peter Yarrow, his music, and Operation Respect, check out his website.