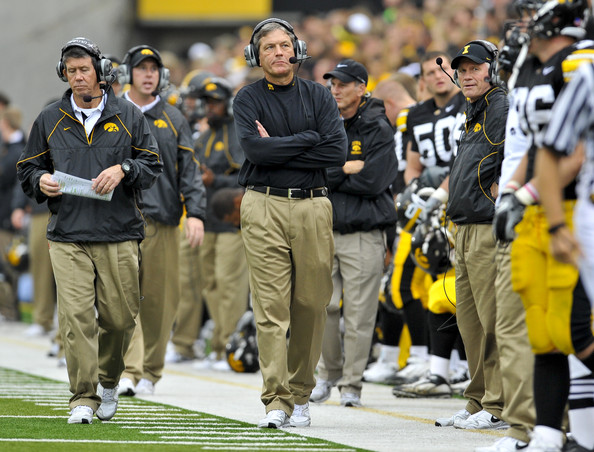 In what can be described as a nice teaser, the Iowa Hawkeyes took the field at Kinnick Stadium for their annual Spring Game on Saturday. On a picturesque day in Iowa City, the Iowa offense defeated the defense 46-31 in front of approximately 10,000 fans.

At the day’s conclusion, it seemed like a mix bag for both sides of the football, showing the Kinnick Stadium crowd a new wrinkle or two. With Jake Rudock manning the starting offense and CJ Beathard running the second string for the first half, both quarterbacks gave the fans something to cheer about.

Rudock threw a 54 yard touchdown to tight end, Ray Hamilton, who raced down the far sideline, bulldozing a would be tackler and carrying Jordan Lomax into the end zone. Hamilton’s strength brought the crowd to its feet, loudly cheering an excellent display of tight end athleticism.

That play was preceded by Beathard, who made his best throw of the day down the seam of the defense, a pass that zipped between the corner and safety into the waiting arms of #18 Derrick Willies for a beautiful 40+ yard touchdown.

The Hawkeyes defense showed good pursuit of the football the entire afternoon. Quinton Alston, the middle linebacker who is counted on to fill the void left by James Morris, had a great day in coverage. His best play came in the 2nd when he hammered Damon Bullock in pass coverage, separating the ball from the man and forcing an incompletion. The senior, Alston could be heard chirping on the defensive sideline, shouting instruction and encouragement to the entire defensive side of the football.

Desmond King, fresh off of his outstanding Outback Bowl performance in January, also played well for the defense. Wearing a road, white jersey, King snatched an interception out of the air in the first quarter, making a play on a deep ball intended for Kevonte Martin-Manley. Defensive Coordinator, Phil Parker, moved around his top corner for most of the afternoon, lining him up against the speedier receiving types in the slot in addition to Jacob Hillyer on the outside.

It took some time to get going, but the running game woke up in the second half. Mark Weisman was ineffective in his marginal workload, but the success came from Jordan Canzeri and Barkley Hill, the tailback who redshirted in 2012 after injuring his knee. Both backs found success running draws and delayed handoffs, entities of a spread, up-tempo style that Iowa seems to have implemented into their offensive scheme this spring.

With the kicking position up for grabs in lieu of Mike Meyer’s graduation, Marshall Koehn was a perfect 3-3 in field goal attempts. He converted tries from 20, 30 and 40-yard ranges on the afternoon. His competitor for the job, #93 Alden Haffar, was 0-2 in attempts that were both beyond 50 yards.

The day concluded with the team huddling at midfield, circling Kirk Ferentz as the home crowd cheered the spring performance. As the spring concludes, the hunger for Hawkeye Football undoubtedly nears. On this summer like day, the preview for the “coming attraction” was just as tantalizing for Hawkeye fans as the promise for tomorrow.