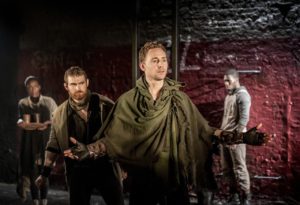 On Friday, February 28th, National Theatre Live had a live broadcast of Donmar Warehouse’s production of Coriolanus at the Englert.

Coriolanus, one of Shakespeare’s last plays, tells the tale of a proud Roman war hero who returns home after defeating his archrival, the Volscian ruler Aufidius, and attempts to translate his success in the battlefield to the political sphere.  However, Coriolanus is too proud to speak to the public and beg them for votes. He first feigns a favorable opinion of the people, but cannot withhold it to advance his campaign.

He instead tells the plebeians exactly what he thinks of them – that they don’t know what’s best for the empire because they cannot understand the army, the necessity of war, or the workings of government.  The people demand Coriolanus’s exile from the same nation he defends.

Despite Donmar Warehouse’s adherence to Shakespeare’s intended time period and location for the play, the production successfully made the play their own.  It used few props, occasionally projected lines from the play on a wall behind the actors, and transitioned between scenes with modern music.   The added effects intensified the tragedy and gave lines time to resonate with the audience.

During the intermission, a representative from National Theatre Live interviewed the director of the production and mentioned the show’s unprecedented acclaim from young audiences, who had slept in tents waiting for tickets. This popularity may have been the result of casting. Tom Hiddleston, well-known for his role as Loki in The Avengers, starred as the tragic hero, Coriolanus, and Mark Gatiss, who has acted in both Doctor Who and Sherlock, filled the role of Coriolanus’s mentor, Menenius.

Perhaps this popularity also stems from the fact that the play remains surprisingly relevant.  While politicians are constantly reviled amid accusations of lying about their beliefs in order to gain popular opinion, Coriolanus is completely truthful to the public – and gets banished from the empire.  The play forces the audience to consider the politician’s plight.