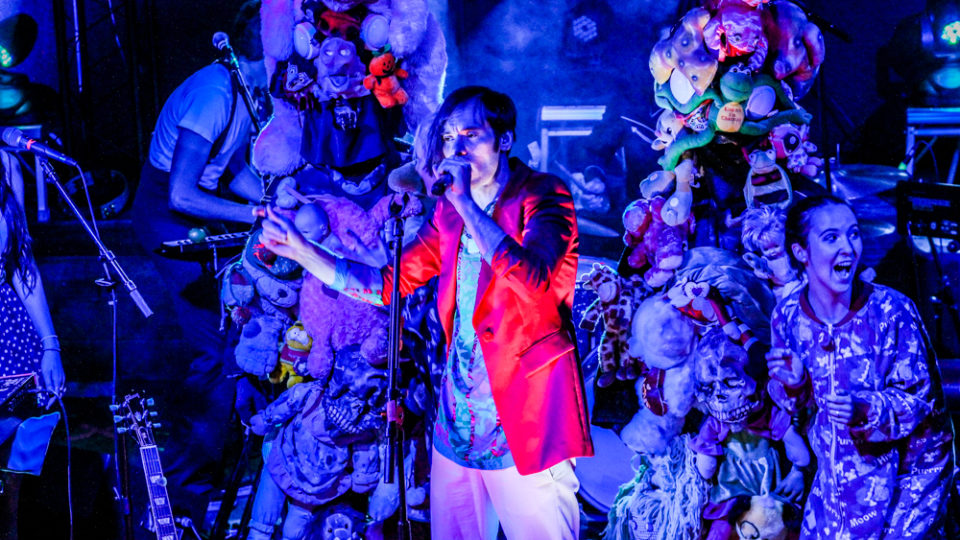 As part of their 2014 summer tour and Mission Creek festival, Of Montreal wowed a jam packed Blue Moose Thursday night with a stimulatingly tantalizing set. Known for their eccentricity and vaudeville-like performances, the Georgia based electronica rock band did not disappoint.

Preceding the festivities, Iowa based pop trio Dylan Sires & Neighbors played a high energy set. With no real front man, the band feeds off of each other’s enthusiasm and was echoed by the crowd.

After playing a little too long they were asked to leave the stage by the venue’s staff, much to the dismay of the crowd. However these guys really know how to have a good time on stage.

Following them was Denver based band, Ark Life. Their soul and rock & roll influenced sound is reminiscent of CCR as well as more modern performers like Sallie Ford. Their predominately female band has yet to release a project as a cohesive but are looking forward to a summer album.

After a brief hiatus in the evening, it was time for the main event. The house lights dimmed as an announcer wearing a red bodysuit, matching balaclava, black cape and top hat stepped into the spotlight. He stands on a box, towering over an anxious Iowa City crowd. The couple next to me give each other a concerned glare. “Ladies and gentleman,” the announcer begins, “are you ready to enjoy your night?” The crowd cheers in affirmation as the masked man recites in extensive detail, a description of the artist soon to take center stage. It’s noted that “he pees honey.”

As this conquistador-like character leaves the stage, he is replaced immediately by Of Montreal. Their psychedelic influenced indie rock radiates throughout the room as a video montage is projected onstage, creating a backdrop of microscopic bugs, and thermal dragon dancers. Front man Kevin Barnes emerges onto the technicolored stage jumping right into songs like “Girl Named Hello” and “Suffer for Fashion.”

Of Montreal has created a visually mind blowing set that leaves many concert goers stunned, and sometimes confused at what they were seeing. In addition to their extremely bizarre and awe inspiring video visuals, the onstage theatrics that included masked men wearing giant lobster claws as well as winged ghosts enticed and excited.

To top it all off, the show concluded with crowd surfing aliens wearing blue tuxedo body suits and confetti machines as the band concluded their encore performance of “She’s a Rejector.”

Kevin Barnes and Co. have pieced together an insanely visually stimulating set for their Summer 2014 tour.