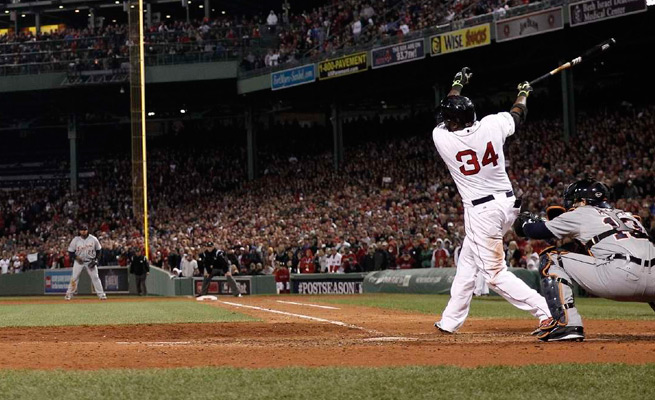 To say Boston Red Sox DH David Ortiz finished the 2013 season with a bang is a rude understatement.

Last October, Ortiz amassed a .688 batting average in the World Series, drove in 13 runs throughout the playoffs, and hit 5 homeruns including this memorable grand slam in Game 2 of the ALCS. Ortiz’s strong play in the 2013 post season left him hoisting the World Series MVP trophy and most importantly, the Red Sox had claimed the Commissioner’s Trophy as the 2013 World Series Champions.

Ortiz, now 38, has been hampered with questions about his ability to perform at the highest level of baseball. These questions ultimately led to rumors that the Red Sox and Ortiz could potentially part ways, ending a relationship that saw three world championships in the span of Ortiz’s eleven year Red Sox career.

Those rumors were put to rest on Sunday, March 23, as Ortiz and the Red Sox front office came to terms on a one-year extension netting Ortiz $16 million in 2015, with a club option for 2016 and 2017. As a result of Ortiz’s new contract, he could be with Boston until he is 41 years old, almost assuring that he retires with the Red Sox.

What’s interesting is the give and take from both sides of the spectrum.

Before Ortiz joined the Red Sox, he was plagued by knee issues as a member of the Minnesota Twins. While Ortiz looked to establish himself in the pros, there was really no break for him until the Twins released him in 2002.

Following the release from the Twins, the Red Sox took a chance on Ortiz in 2002 and it paid dividends for both sides.

What makes this deal so scary for the Red Sox is the fact that they are investing in a 38 year old who, at times, can look pedestrian at the plate. Ortiz’s new found youth that we saw in the 2013 post season definitely makes the future options much more attractive.

As long as Ortiz can stay healthy, there is no reason that his impact won’t be felt for the next two or three years in baseball. Of the eleven seasons with the Red Sox, Ortiz has obtained a batting average of .300 or better in seven of those seasons. Although his RBIs may be dwindling, the clutch factor is what makes Ortiz such an attractive piece within the Red Sox organization.

Will Ortiz be able to continue his dominance with the Red Sox this season? Will we see the dominating post season that brought Ortiz the World Series MVP?

The eyes of the baseball world will be focused in on Ortiz this season. A season in which so much rides on his future.