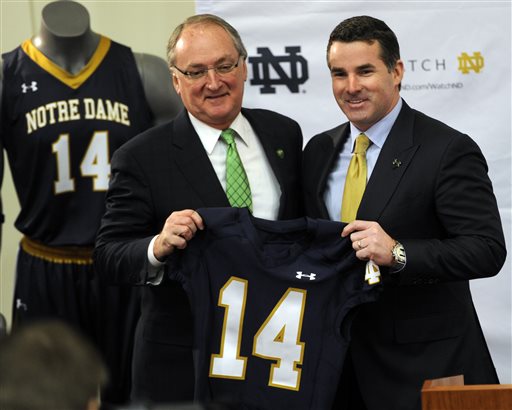 After nearly 17 years, Notre Dame has decided to go with another outfitter. But if Adidas could not have the contract, it would definitely belong to Nike right? Wrong.

Arguably the most storied collegiate athletic program in history just signed a ten-year deal with the relative newcomer, Under Armour.

Though no exact figure has been confirmed, according to ESPN the value of the deal, in cash and merchandise combined, is worth about $90 million. This would make this contract the richest shoe and apparel deal in college sports.

As an Irish fan I am happy to see them switching fromAdidas. Personally I have always found the Adidas merchandise to be a bit bland, and until lately I felt the same about the uniforms. Hopefully Under Armour will bring some of the occasional flashy uniforms like with Texas Tech or Maryland, but will primarily go with traditional styles as they have done with Auburn.

I realize it is a bit silly to treat something as mundane as new uniforms as a news worthy event, but this is a new era. Uniforms play a much bigger role than they used to. Within the past several years they have created quite a boom in revenue and even recruiting. Anymore, it can play almost as big of a role as the playbook or even the coaching staff. Rather than it being a question of “who to play for”, it has become “which would I rather wear?” There is a reason Oregon lands top recruits each year.

However, this is not to say that Notre Dame does not receive top recruits. Not every successful school has the flashy threads. Alabama, Auburn, and Oklahoma seem to do just fine with traditional uniforms, as reputation and coaching seem to be the major recruiting factor with all of them. Still, having the occasional “pro combat” uniform can do a lot for not only recruiting, but for fan interest as well. I am in my third year now at Iowa and one thing that usually comes up when watching football is when the Hawkeyes will get one. So if one says uniforms do not matter, then they have not been paying attention recently.

Regardless of what the new merge with Under Armour will bring, one thing is for certain, much like the Irish’s contract with NBC, it is definitely not going to lose them any money.