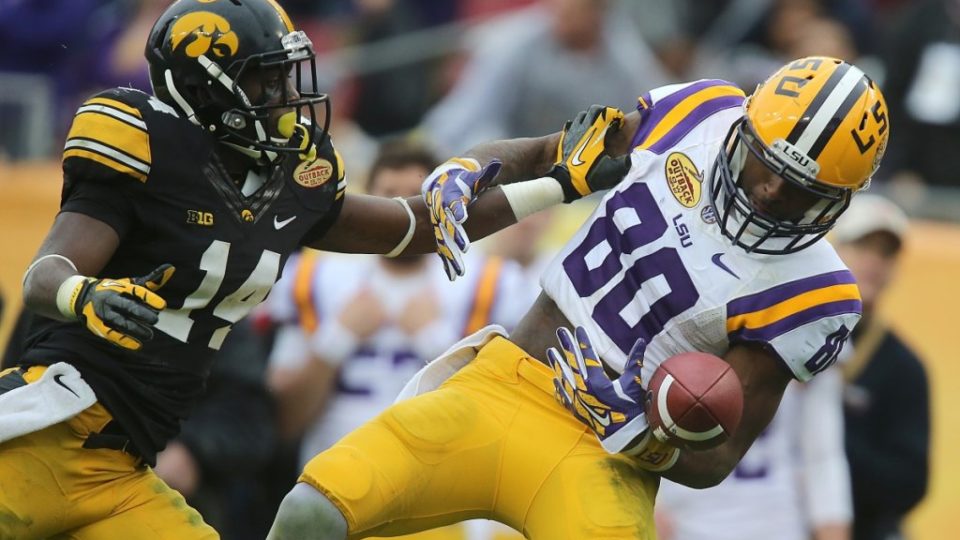 TAMPA, FL—Heading into the 2014 Outback Bowl, the athleticism of the LSU receiving core highlighted the perceived advantage on the side of the SEC representative in Tampa. Odell Beckham Jr. and Jarvis Landry, both sporting 1,000 yard receiving seasons and enormous NFL potential, posed as gigantic challenges to overcome for an Iowa secondary that was often exposed during the early weeks of the 2013 college football campaign.

As the game concluded and LSU celebrated a 21-14 victory, the story was everything but the Tigers’ passing game.

Beckham Jr. and Landry were neutralized by a cornerback tandem of senior B.J. Lowery and freshman Desmond King, who held the Tigers’ pass-catchers to just four catches in the January 1st contest.

As Iowa bids adieu to the likes of Lowery and their three outstanding, starting linebackers, the Hawkeyes have to be excited about the upside of the true freshman King.

Desmond King, who emerged during non-conference play this season to eventually win the right corner position beside Lowery, had a sparkling day in coverage against two of the most athletic receivers the nation has to offer. King was matched up in man coverage most of the day, often left on an island to guard against the Tigers’ vertical passing game.

Along with his multiple pass defenses on the afternoon, King recorded six tackles in support against the stingy Tiger running game, including both a tackle for loss and a touchdown-saving play on the game’s opening rush by Jeremy Hill.

As customary at Iowa, King’s freshman label forced him to shy away from the post-game media circus, however even in a loss, his teammates on defense recognized the corner’s strong afternoon. Said Carl Davis, “He’s been making plays all year. He’s a great athlete. I’m glad to have him on our team and I’m looking forward to having him next year.”

LSU’s offense opened up the second half looking for “chunk” plays, trying to consciously throw the ball down the field to their outstanding wide outs, in hopes to dole out the knockout blow to the Hawkeyes. Yet the true freshman was undaunted, holding his ground and blanketing the speedy receiving duo.

As Iowa turns, along with the calendar, towards what 2014 will bring, it is hard not to leave Florida excited about King’s potential. With a full offseason within Kirk Ferentz’s program, the ceiling for King next season is raising higher by the day. Said Davis, before disappearing back into the locker room, “I know he’ll know how to do his part even better. It was no surprise to me, he just makes plays.”