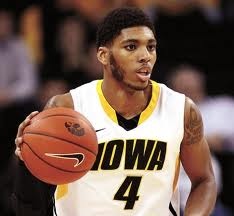 The Iowa Hawkeyes trailed for almost the entire game, but somehow, someway, came back to tie the game at 67 with just a 1:40 left in regulation.  Iowa would force overtime and take the W away from Xavier as they won the game 77-74.

Iowa let Xavier build some pretty big leads throughout the second half and a lot of people thought Xavier was running away with the game, but Iowa got a spark in the form of Devyn Marble.

Marble sparked a 10-0 run from the under 12 timeout until the under 8 timeout.  Iowa was trailing Xavier by 13, but it was down to 3 and Iowa had life again.

Life was something the Hawkeyes didn’t have in the first half.  Iowa trailed Xavier at the half by 7, which was fine, they had 30 points, which is also fine, but Devyn Marble had 16 of them.  That’s not fine.  Just bout every other Hawkeyes with maybe the exception of Zach McCabe wasn’t playing with much life.

That continued into the second half until they rest of the team finally decided they would join in.

After the game was tied at 67, Xavier’s Isaiah Philmore hit two free throws to give Xavier a two point lead.  Iowa went down and got a bucket from Gabe Olaseni on a pretty feed from Mike Gesell.  Xavier guard, Dee Davis, would turn the ball over with 24 seconds left in the game.  Iowa ran a play for Zach McCabe at the end of regulation, but the shot was blocked, sending the game into overtime.

Iowa would make it interesting in the extra session.  They turned the ball over carrying a three point lead with 20 seconds left.  That allowed Xavier to get 3 looks at the bucket, but they did not convert on any of them which gave Iowa the win.

Devyn Marble did not play in the extra session, but did led all scorers with 30 points.  Zach McCabe added 11, while Aaron White gave Iowa 10.  Olaseni tallied a double-double with 10 points and 11 rebounds.

Iowa will now play the winner of UTEP and Tennessee on Friday evening.  Tip-off is set for 6:00 p.m.